There are many examples of mathematical breakthroughs achieved in prison. Maybe the most famous is from the French mathematician Andre Weil, who came up with his hugely influential conjectures while in a military prison in Rouen, France. Another mathematical giant, Srinivasan Ramanujan, started off with no formal training in mathematics and produced most of his revolutionary results in complete isolation.

In his autobiography, Weil mentions being able to achieve special clarity while in prison. Is there something special about prison and mathematics?

Havens received a 25-year sentence in Washington in 2011 after being convicted for murder. (He was arrested in 2010 and charged in a drug-related shooting.) Havens found his love and gift for mathematics while in solitary confinement a few months after his incarceration. His journey in mathematics and research led to him publishing a first-author paper in an academic mathematics journal in January 2020.

In January 2013, my partner Matthew Cargo, who was, at the time, the production editor for Mathematical Sciences Publishers, was forwarded this letter in an email from a colleague:

“To whom it may concern,
I’m interested in finding more information on a subscription to Annals of Mathematics for personal use. I’m currently serving 25 years in the Washington Department of Correction and I’ve decided to use this time for self-betterment. I’m studying calculus and number theory, as numbers have become my mission. Can you please send me any information on your mathematical journal? Christopher Havens, #349034

PS. I am self-teaching myself and often get hung on problems for long periods of time. Is there anyone who I could correspond with, provided I send self-addressed stamped envelopes? There are no teachers here who can help me so I often spend hundreds on books that may or may not contain the help I need. Thank you.”

Cargo put Havens in contact with my parents, who are both mathematicians. 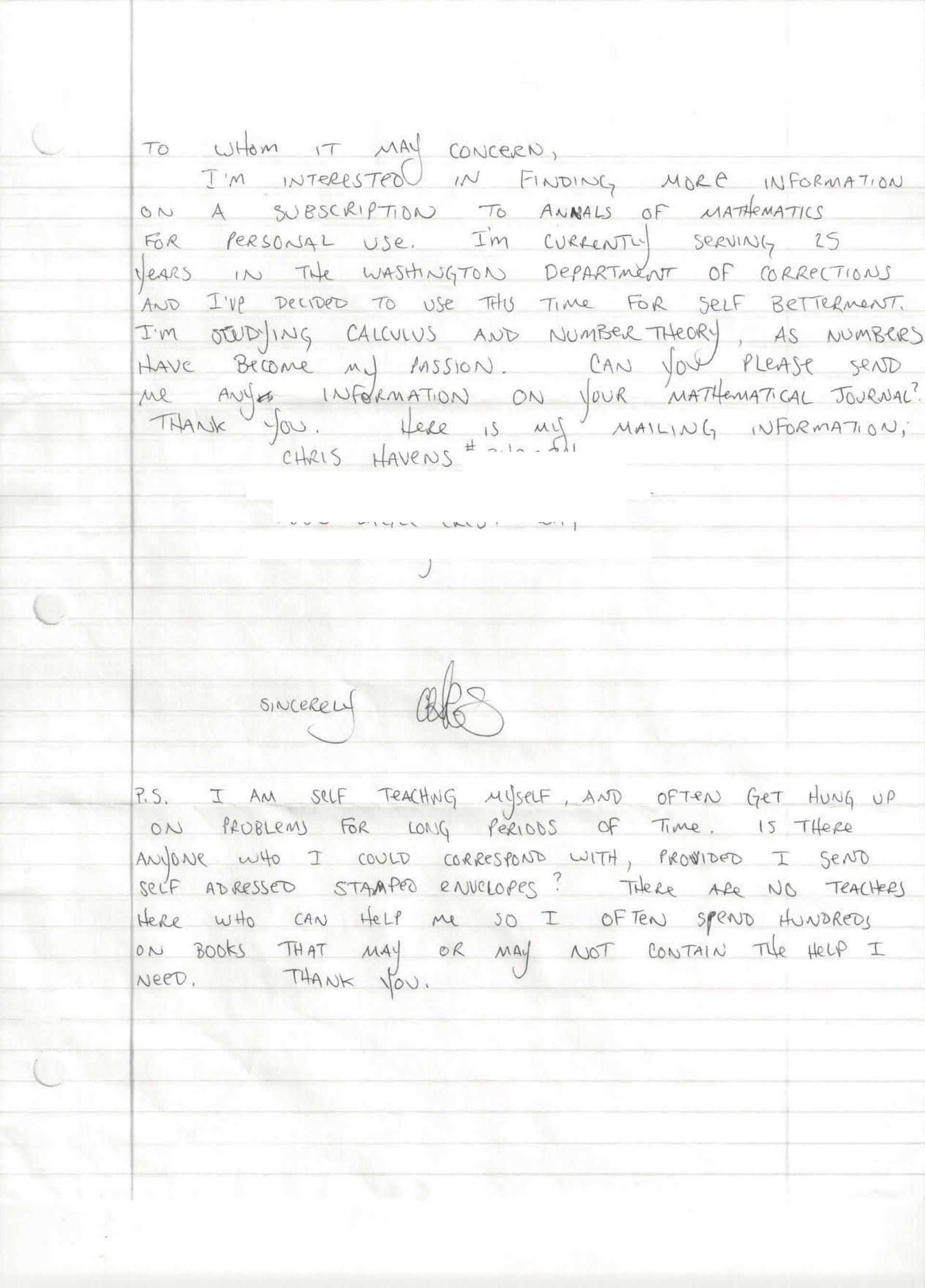 Initially, my father, Umberto Cerruti, a number theorist who was a professor of mathematics at the University of Torino, Italy, agreed to help Havens simply because we asked him. My father thought that Havens was likely one of the many cranks who fall in love with numbers and come up with a flawed theory. To test him, he gave Havens a problem to solve.

In return, my father received a 120 cm long piece of paper in the mail, and on it was a long and complicated formula. My father entered the formula into his computer and to his surprise, the results were correct!

After this, my father invited Havens to work on a problem involving continued fractions he was working on.

Discovered by Euclid in 300 BC, continued fractions allow expressing all numbers through sequences of integer numbers. For example, pi is the ratio between a circle’s circumference and its diameter: 3.14159…. The sequence of numbers after the initial digit continues forever and is totally chaotic. But written as a continued fraction its expression is simple and beautiful: 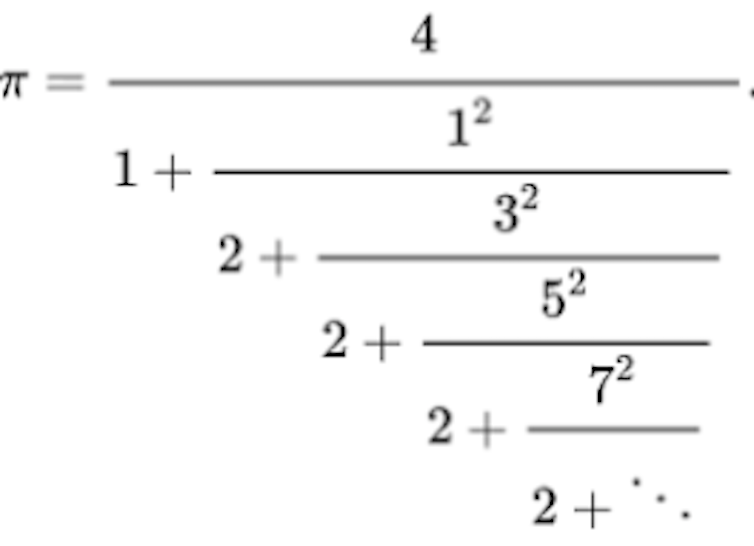 Continued fractions are an example of the power of number theory, the field that both Weil and Ramanujan mostly contributed to. Number theory has given us breakthroughs in modern cryptography, nowadays crucial in banking, finance and military communications.

Havens’ findings, published in the journal Research in Number Theory in January 2020, showed for the first time some regularities in the approximation of a vast class of numbers. This result can open new fields of research in number theory. Indeed, finding new ways for writing numbers is one of the most important problems for a number theorist, although the results may not have an immediate application. Just as an example, there are supercomputers fully dedicated to computing trillions of pi digits.

Havens worked on this topic using only pen and paper in his prison cell, exchanging ideas with his co-authors in Italy through hard-copy letters mailed across the ocean.

So how could this happen? In Havens’ words:

“It was less than a year after I came to prison that my behaviour landed me in ‘the hole’ (solitary confinement). It was in the hole that my life would change because there I figured out that I loved mathematics. I spent somewhere around 10 hours a day studying. … I decided to enter the Intensive Transition Program, ITP. This is a one-year program which helps people get their minds right. It’s designed to effectively aid you into ‘taking your head from your backside.’ This was my schedule. Eat, math, remove my head from my backside, brush, rinse, repeat. It was an important time in my life.”

It was after the ITP that Havens sent his inquiry, and the mentorship with my parents started.

My parents sent him loads of books. However, the prison blocked them all as they did not come from an authorized vendor. Havens worked with the prison staff and started the Prison Mathematics Project, where he would explain mathematics to other inmates. In exchange, they were allowed a library and a room to meet biweekly. It worked — the box of books got admitted to the prison.

I spoke with Havens on the phone in three 20-minute chunks (as much as he’s allowed to talk at a time) to write this piece. Havens used the word education frequently in our conversations:

“Education was a hassle to me. I was a high school dropout — a drug addict, held no jobs, no place long enough to call home. … Education is hard to come by in prison. … So I’m looking for an education outside of prison. I try to build bridges and nurture my relations with others outside. Because this is my education. Every opportunity is a learning experience for me because they are so rare.”

Havens also sees math as a way to “pay his debt to society.”

I definitely have plotted out a long-term life plan to accommodate paying a debt that has no price. I know this path is permanent … and there never is a day that it’s finally paid off. But this longevity in debt is not bad. It’s inspiration. Maybe this will sound stupid, but I serve my time in the company of the soul of my victim. I dedicate a lot of my biggest accomplishments to him.0

Indeed, despite the solid evidence that getting a degree while in prison significantly decreases recidivism, post-secondary opportunities in prison are limited. And with no access to the internet, most long-distance degrees are out of the question for inmates.

Havens is currently pursuing an associate of science degree from Adams State University, which offers it through the mail. But he already knows all the math the university requires. So for now, Havens wishes he could have a math mentor to touch base with on a regular basis.

When Havens gets out, he intends to complete a bachelors and a graduate degree, despite the clear difficulties that can result from a criminal history. He plans to start a career in mathematics, and hopes to transform the Prison Mathematics Project into a non-profit organization for inmates with a gift for mathematics.

This article is republished from The Conversation under a Creative Commons licence. Read the original article.