Facebook’s suspension of Donald Trump will continue for now, the company announced yesterday. But it still has not resolved the central problem that Trump has created for social media platforms and, by extension, American democracy.

The problem is that Trump lies almost constantly. Unlike many other politicians — including other recent presidents, from both parties — he continues to make false statements even after other people have documented their falseness. This behavior undermines the healthy functioning of American democracy, particularly because Trump has such a large following.

His lies about the 2020 election are the clearest example. They have led tens of millions of people to believe a made-up story about how Joe Biden won. They have become a loyalty test within the Republican Party.

In Congress, Republicans are moving to oust Liz Cheney as one of their leaders after she said that people who repeated Trump’s “big lie” were “turning their back on the rule of law, and poisoning our democratic system.” In several states, Republican legislators are using Trump’s made-up story to justify new laws that make voting more difficult, especially in heavily Democratic areas. There is a direct connection between Trump’s lies about the election and the weakening of voting rights.

But Facebook has decided that the health of American democracy isn’t its problem. 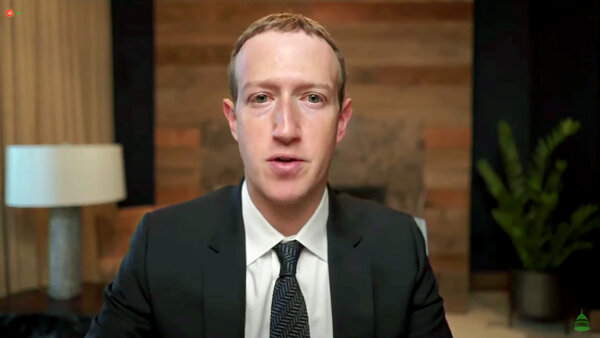 The company justified its suspension of Trump in January not based on his lies but instead on his incitement of violence, before and during the Jan. 6 attack on the Capitol by his supporters. Facebook continues to allow politicians to spread many falsehoods, saying it does not want to police truth. Distinguishing among truth, opinion and falsehood can indeed be tricky — but Trump’s claims about electoral theft are not a nuanced case.

The issue here isn’t the enduring philosophical question of what constitutes truth; it’s whether Facebook is willing to tolerate obvious and influential lies. So far, the company has decided that it is. It has drawn a line somewhere between blatant untruths and incitement to violence.

“Facebook’s approach to Trump’s attempts to undermine confidence in the integrity of the election was weak and ineffective,” Richard Hasen, a law professor at the University of California, Irvine, told me. When Trump last year falsely described mail-in voting as corrupt, for example, Facebook left up the post and instead added a link to a website where people could find general election information, as Hasen describes in his forthcoming book, “Cheap Speech.” Twitter, he notes, has taken a more aggressive position.

Yesterday’s decision officially came from a Facebook-appointed panel of speech experts that the company calls its Oversight Board. The board has no actual power to regulate the company, but it may have some influence on Facebook executives. In their statement, board members criticized Facebook for levying an indefinite suspension on Trump and said it should choose in the next six months between a permanent ban and a time-limited one: “In applying a vague, standardless penalty and then referring this case to the Board to resolve, Facebook seeks to avoid its responsibilities,” the board wrote.

The board also suggested that Facebook should do more to distinguish between posts by ordinary people with small followings and posts by political leaders and others with wide influence (as my colleague Shira Ovide points out in her latest newsletter). The board wrote:

… context matters when assessing issues of causality and the probability and imminence of harm. What is important is the degree of influence that a user has over other users. When posts by influential users pose a high probability of imminent harm, as assessed under international human rights standards, Facebook should take action to enforce its rules quickly.

That passage highlights the crux of the issue. Facebook has evidently decided that undermining the credibility of democratic elections does not violate international human rights standards. If it maintains that position, Trump may be back on Facebook six months from now.

What is the Facebook Oversight Board? Cecilia Kang has written an explainer, and Ben Smith has written a column.

The board’s message to Facebook’s C.E.O., Mark Zuckerberg: “This problem is yours,” Kevin Roose writes.

Nick Clegg, a former deputy prime minister in Britain, is steering the company’s response. Read a profile of him.

How the suspension has mattered: Politico’s Michael Kruse traveled to Ohio recently and was struck by how little many Republican voters knew about Trump’s recent comments.

Support from the White House is not a guarantee that a waiver will be adopted. It needs support from all members of the World Trade Organization.

The E.U. is considering whether to follow the Biden administration’s decision.

Supporters cast the move as a moral imperative that would get shots to India and other countries.

With the pool of vaccinated Americans growing, the number of confirmed new cases in the U.S. has fallen 35 percent in the past three weeks.

“We’re clearly turning the corner,” Michael Osterholm, an epidemiologist, said. Here is The Times’s latest assessment of the pandemic, by Julie Bosman and Sarah Mervosh.

A federal judge struck down a national moratorium on evictions that was signed by Trump and extended by President Biden.

Cheney called on Republicans to reject “the dangerous and anti-democratic Trump cult of personality” in a Washington Post op-ed.

Oval Office art is symbolic. Here’s how to read it.

Clashes in Colombia between the police and protesters against inequality have killed at least 24 people.

Atlanta officials reinstated the police officer who was fired last summer after he fatally shot Rayshard Brooks, a Black man.

DNA evidence suggests an Arkansas man executed in 2017 was innocent, his lawyers said this week.

An Italian jury found two Americans guilty of murder in the 2019 killing of a police officer in Rome. They were sentenced to life in prison.

The filibuster isn’t blocking progressive change — disagreement among the Senate’s 50 Democrats is, argue National Review’s Jim Geraghty and the political scientists Frances Lee and James Curry in The Atlantic.

Lost and Found: His ship vanished 176 years ago. DNA offered his descendants a clue.

A Times Classic: What happened to Bob Ross’s paintings? We found them.

Lives Lived: Tamara Press was a dominant Soviet shot-putter and discus thrower in the 1960s. But amid questions about her physique, she pulled out of a major event that required sex testing. She died at 83.

Without Alex Trebek, no long streaks

For the past four months, a rotating cast of celebrities has hosted “Jeopardy!” Some seem natural fits as Alex Trebek’s successor, Amanda Hess writes in The Times: The former “Jeopardy!” champion Ken Jennings infused shows with a Trebek-like intellect, while the Packers quarterback Aaron Rodgers brought an outsider’s earnestness. Others, like Dr. Mehmet Oz, have worked less well, trying to outshine the show with stories and jokes.

Fans are getting involved, too: A petition calling for LeVar Burton, the former star of “Reading Rainbow,” to be the next host received more than 250,000 signatures — and helped get him a guest spot beginning July 26.

One strategic wrinkle: Contestants seem to be struggling to adapt to the variation in the hosts’ speaking styles and aren’t sure exactly when to buzz in, Claire McNear notes in The Ringer. That has created a randomness that has prevented any long winning streaks.

Regardless of who gets the permanent job, Hess argues that the clues, “which are precisely written and briskly dealt,” are the show’s real draw.

Turn store-bought gnocchi into a seasonal dish with peas and leeks.

Get inspiration from Rolling Stone’s list of the 100 best sitcoms. The Times recommends these 13 movies before they leave Netflix.

What to Listen to

The hosts on Facebook’s Trump ban.

The pangrams from yesterday’s Spelling Bee were admonition, damnation, dominant, domination, intimidation and nondominant. Here is today’s puzzle — or you can play online.

P.S. Tuesday night’s episode of “Jeopardy!” featured an answer about The Times. (Scroll to the bottom for the solution.)

Today’s episode of “The Daily” is about Facebook’s suspension of Trump. On “Sway,” the Republican pollster Frank Luntz discusses the ruling.

Lalena Fisher, Claire Moses, Ian Prasad Philbrick and Tom Wright-Piersanti contributed to The Morning. You can reach the team at [email protected].

(Jeopardy solution: What is newsprint? — as in “All the News That’s Fit to Print.”)