Marching toward middle age is sequence of older-than moments, when you realize that you’ve passed some famous age that seemed impossibly distant as a child. First you pass the prodigies: Older than William Pitt the Younger when he became prime minister, older than Donna Tartt when she published “The Secret History,” older than Alexander the Great when he conquered Persia. Then come the athletes: When you reach your later 30s, you realize that if you had actually become a baseball star, you would now be Kirk Gibson gimping to the plate, an old man in baseball years.

This year, at 41, I picked up “A Child’s Christmas in Wales,” the great exercise in Yuletide nostalgia, which I’ve always read in an edition with terrific Trina Schart Hyman illustrations to accompany Dylan Thomas’s poetic prose. The first of those illustrations depict the book the way it reads — as an old man’s reminiscences, delivered to a grandson in the mythopoetic style: Years and years and years ago, when I was a boy, when there were wolves in Wales … it snowed and it snowed. 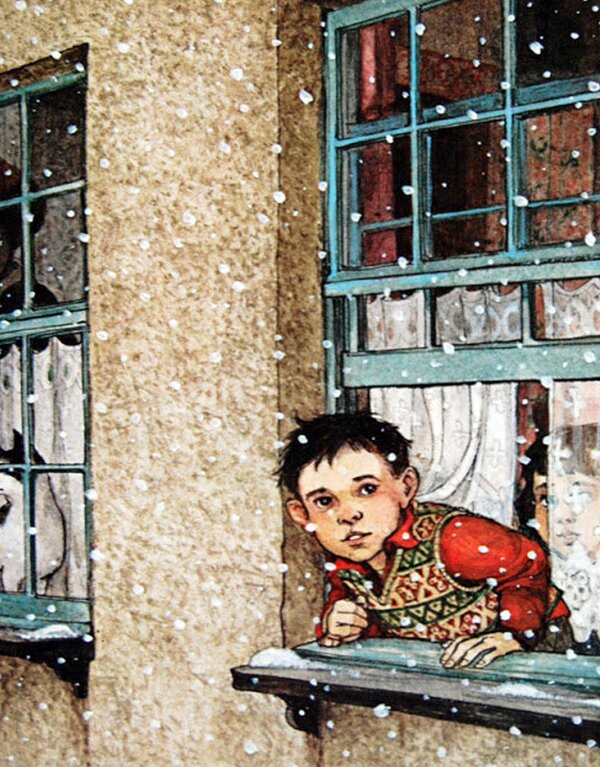 But this year, I realized that I’m now older than Thomas was when he wrote “A Child’s Christmas,” just before his untimely death at the age of 39.

The kind of nostalgia the Welsh poet summoned in his little book is likely to be uniquely powerful this year. For many people, the experience of Christmas is always measured against a memory palace handed down from childhood — different scenes from different years piled together in a vision of what the holiday should be, compared to which the exhausting grown-up reality usually falls short. In 2020 that falling-short may feel particularly painful, because separation and isolation shadow so many Christmases this year.

But who feels this nostalgic pain most sharply? I had grown so used to thinking of “A Child’s Christmas” as a grandfatherly book that it’s striking to recognize it as the work of a man of my own age, like me a writer and a father of young children (though unlike me a literary celebrity living a wild and dissolute New York life). His Christmas classic poses as a fond glance backward from old age, but really its nostalgia belongs to the chaotic, high-stress middle of life’s journey — the most unhappy phase of life, at least if you believe the social scientists.

So what should the middle-aged, in particular, make of their Christmas nostalgia, their annual December ache? One answer is that it’s a gift: A glowing coal carried through cold grown-up nights, a memory of innocence and a counterpoint to the compromised selves that we become with age. In middle age, you start to recognize that the choices you’ve made in adulthood can’t be easily unwound, that you might become a person you didn’t mean to be — waking up in another 20 years as the villain of your own story, Ebenezer Scrooge before the visitation.

In that case, the memory of a Christmas childhood can hold open the door leading back. In “A Christmas Carol,” the first thing the ghosts show Scrooge isn’t Tiny Tim or his own gravestone. They show him his younger self at Christmastide, and his memories serve as a powerful rebuke to everything that he has let himself become — so powerful, in fact, that Scrooge is made repentant just by seeing those few scenes of Christmas past.

But maybe that transformation is a little bit too pat. Maybe there are ways that sentimental Christmas memory is less a gift than a kind of temptation, a way of telling yourself that you’re still fundamentally an innocent when you’re anything but, a way of stealing from the past to ease your conscience while you misbehave as an adult — as the poet who wrote “A Child’s Christmas” was definitely known to do.

From this perspective, real Christmas wisdom requires recognizing that there’s no going back to any childhood Eden, and accepting the fall into adulthood as Christians are supposed to accept the Fall of Man: as a felix culpa, a potentially happy fall, that offers the possibility for something even better than the original innocence — if, that is, you can keep to the narrow way, bear up and run the race.

So the Christmas classic for the middle-aged might be neither Thomas’s nostalgia trip nor Dickens’s ghost story, but the harsher medicine of Frank Capra’s “It’s a Wonderful Life.” Capra’s movie trades on nostalgia but fundamentally critiques it: The lesson it imposes on George Bailey is that he should be grateful that the possibilities of youth have narrowed into what seems to him like disappointment — because that life can actually be a better life, with richer rewards, than the paths his boyhood self might have chosen.

If he can only see it, that is. Such, then, should be the middle-aged prayer at Christmas: not for the overwhelming rush of childhood memory — there will be time for that later — but for the clarity to see the present time, even 2020 with all its brutal impositions, as its own period of grace.