Opinion | Black Music Has a New Home in Nashville

NASHVILLE — The long awaited ribbon cutting for the National Museum of African American Music is Monday, Martin Luther King’s Birthday, in the heart of the tourist district here. But there’s still so much construction equipment enveloping 5th + Broad — Nashville’s sprawling new mixed-use development at the corner of Fifth Avenue North and Broadway — that the museum can be easy to miss.

Lower Broad is basically just one raucous bar after another. From the storied Tootsie’s Orchid Lounge, where the Grand Ole Opry performers of old once slipped in the back door between sets, right down to the Cumberland River, it’s a place where visitors go to get drunk and dance to big-hat country songs. Among tourists, it’s known as the Honky Tonk Highway. Hardly the most natural place to build a museum devoted to the music of Black Americans.

This is not a small space for a niche audience or a token recognition of the least recognized people in Music City’s musical heritage. It is a 56,000-square-foot tribute to the makers of the first music that was truly American — “one nation under a groove,” as the museum’s tagline puts it in a nod to the George Clinton song. Beginning with the musical traditions of enslaved people, its interactive exhibits celebrate the brilliant legacy that has followed the first Black Americans through more than 50 musical genres and subgenres — classical, country, gospel, jazz, blues and hip-hop, just for starters — during the past 400 years. According to the museum’s website, no other museum with this purpose exists in the world.

I took a preview tour last week with the president and chief executive, Henry Beecher Hicks III, but this museum is so elegantly designed that a guide isn’t necessary.

A 15-minute orientation film in the museum’s Roots Theater gives a brief overview of the evolution of Black music in America as it unfolded: “We wanted to tell a chronological story of American music, rather than a genre-driven or an artist-driven story,” said Mr. Hicks. After leaving the theater, visitors can explore five interactive galleries, each extending outward from a semicircular corridor that conveys the 400-year timeline of African-American music.

The walls of the Rivers of Rhythm Path, as this central gallery is called, link historical events and eras with the music that sprang from them, while the interactive displays offer visitors a chance to explore the musical ecosystems that evolved as a result. This design is a way of telling the ever-uncoiling history of Black oppression in America — from slavery through Reconstruction, Jim Crow and the Great Migration to today — while celebrating Black creativity and ingenuity in response to that history.

Why a river? It’s the visual embodiment of “The Negro Speaks of Rivers” by the poet Langston Hughes: “I’ve known rivers ancient as the world and older than the flow of human blood in human veins.”

“Rivers and water are big thematics in African and African-American music,” Mr. Hicks said. “But it’s also a way of showing that the genres are not independent of each other. They really flow together. We want people to understand where American music began but then how it went in so many different directions from there.” Those directions include the music dominated by white artists, which often co-opted Black artistic innovations and absorbed them as its own. 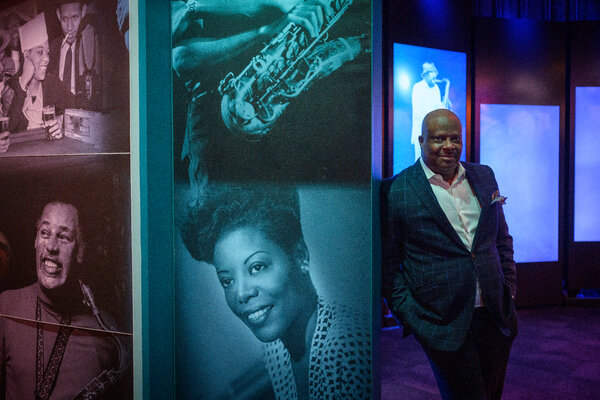 The walls of the Rivers of Rhythm Path contain not only images of Black artists in performance but also expansive screens that convey this history on a grand scale, advancing through the timeline like a movie-palace documentary but also pausing, at intervals, to present immersive performances by some of the greatest Black musical artists in history. It was my great luck to be in the gallery just as a larger-than-life Prince began to sing “Purple Rain.”

The galleries that open from the central corridor are both period-specific and genre-deep, offering more extensive explorations of the time and music, in both high-tech forms and in the glass cases of more traditional museum exhibits. (On display at the National Museum of African American Music are more than 1,500 artifacts.) In addition to the Rivers of Rhythm Path and the five period-specific galleries, there are also eight smaller exhibits that offer museum visitors a participatory experience — the chance to sing with a gospel choir in the Wade in the Water gallery or to rap in the one called The Message.

Standing outside, in front of the construction site that obscures the Broadway side of the museum, it’s hard not to wonder how this jewel could possibly belong smack in the middle of the least beautiful — the least truly Nashville — part of Nashville. But looking just a few yards up Fifth Avenue, you start to get the point: Opposite that side of the new museum is the Ryman Auditorium, known to country fans the world over as the Mother Church of Country Music.

Like the Ryman — and like the Country Music Hall of Fame and the Schermerhorn Symphony Center, both only blocks away — the National Museum of African American Music is a space that honors the musical traditions of the past in a way that helps us understand that the past is never truly past, that it is always tugging up both its treasures and its tragedies and carrying them insistently into the future.

As Ken Burns points out in his documentary series on country music, the genre that gave Music City its nickname owes as much to Black songwriters, musicians and innovators as it owes to those white performers who slipped out of the Ryman to the back door of Tootsie’s and scrawled their names on the back room walls. Nashville tourists, even Nashville natives, might not know many of the names of the artists who created the River of Song, but that’s about to change. The National Museum of African American Music is exactly where it needs to be.

Margaret Renkl is a contributing opinion writer who covers flora, fauna, politics and culture in the American South. She is the author of the book “Late Migrations: A Natural History of Love and Loss.”