Opinion | Finding Beauty in the

Photographers tell a story through a single image. We wait patiently, anticipating the moment, and working with the light and space available. There is much debate around what defines street photography. But what I love most about it is how accessible the format is. The photographer moves through public spaces, observing, engaging, capturing beauty in the seemingly — the unexpected moments of joy among the mundane.

Staring is rude, but photographs allow us to gaze endlessly at what we find compelling. The photograph titled “Red Upsweep,” taken by Jane Levine in 2019, conveys a strong sense of presence that can be felt in the meticulous detail the subject pays to her appearance as she steps out into the world. It gives us a sense of who she is, and yet she is anonymous.

Like many others, I was awakened to action after Donald Trump won the 2016 election. In 2017, I created Women Street Photographers, an Instagram account that highlights and celebrates the work of women who work in what has historically been a male space. 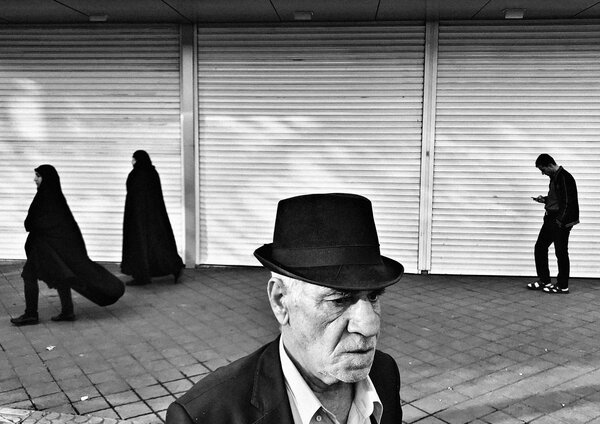 Street photography is a way to escape the stresses of daily life, to find pleasure and joy amid the everyday and to see the magic in the routine. Melissa Breyer’s untitled 2017 photograph made in Yountville, Calif., is a perfect example of this. She was sitting in a bistro sipping a violet mimosa when she noticed a woman’s face, twisted by the class partition that separated them. Fascinated by the surreal image, she took a few shots. When I first saw the strange image, it seemed as though made in another time.

Graciela Magnoni’s photograph taken in Punjab, India, in 2018 is an intriguing look at the space where street photography and documentary photography intersect. I am drawn to the figure in the center, poised like an allegorical figure in a Botticelli painting. I want to know more about these young, well-dressed men. I love photographs that raise a question.

The photographs that appear here are from the book “Women Street Photographers,” by Gulnara Samoilova.