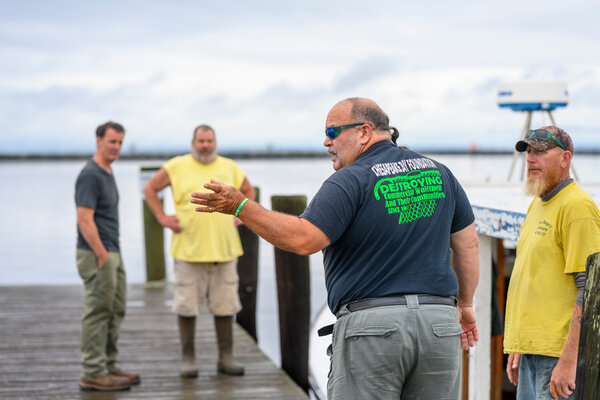 Ms. Stockman is a member of the editorial board.

ROCK HALL, Md. — When Dave Harden decided to run for Congress as a Democrat on Maryland’s conservative Eastern Shore, a friend gave him a piece of free advice.

“Democrats lose on three things: abortion, guns and regulations,” the friend said. “If you keep one, you have to give up the other two.”

Abortion and gun rights have both inspired passionate activism and countless front-page news articles. Regulations — not so much. Yet nitpicky government rules remain a potent and underappreciated source of populist anger against Democrats, especially in rural areas.

On the campaign trail, Mr. Harden has gotten an earful from voters about maddening and arbitrary restrictions: Why are wineries in Maryland limited to serving only 13 kinds of food? Why does a woman who sells her grandmother’s cobbler have to cough up tens of thousands of dollars to build a commercial kitchen? Why does a federal inspector have to be on hand to watch wild catfish get gutted — but not other kinds of seafood? The short answer is that restaurant associations tend to wield more political clout than wineries, and catfish farmers in Mississippi are more powerful than seafood harvesters in Maryland. Big businesses can afford to hire lawyers to help them cut through red tape and lobbyists to bend government rules to their will. Small businesses, especially in rural places, get slammed.

“The claim of overregulation is especially animating on the political right,” Joshua Sewell of Taxpayers for Common Sense told me. He said misleading rumors that the Environmental Protection Agency planned to regulate farm dust or that President Biden’s Build Back Better plan would have taxed belching cows played right into the stereotype of Democrats as city folk who were infuriatingly eager to regulate almost anything in rural America.

Can Democrats flip the script and win over conservative districts, particularly small- business owners in those areas, by speaking out against government red tape? Mr. Harden, a 59-year-old former Foreign Service officer who is running for Congress in Maryland’s First District, is trying. He hopes to replace Andy Harris, the sole Republican in Maryland’s congressional delegation. (Mr. Harris voted to overturn the results of the presidential election in 2020 and reportedly once tried to bring a gun onto the House floor.)

Mr. Harden must first win a July 19 primary against Heather Mizeur, a progressive herb farmer who once represented Montgomery County, a much more urban area, in the state legislature. Ms. Mizeur has more money and name recognition than Mr. Harden, but he believes he has a chance because she seems out of step with the conservative district, which is considered a safe Republican seat.

Mr. Harden is trying to chart an alternative path for Democrats in rural areas. He’s no fan of Donald Trump. He left a 22-year career in the Foreign Service in 2018 because he didn’t want to serve the Trump administration. But when it comes to regulations, Mr. Harden doesn’t sound all that much different from Mr. Trump.

“The regulations in rural economies are ridiculous,” he told me.

Mr. Harden is trying to walk a difficult line, appealing to voters who are angry about government overreach without turning off the Democratic base. He says he doesn’t oppose reasonable environmental regulations, but he rails against rules that make it harder for small businesses to survive.

It’s a message that comes naturally to him. He spent years trying to improve the business environments in Iraq and the Palestinian territories as a senior U.S.A.I.D. official. He led a program in the West Bank town of Jenin that opened up a border crossing with Israel and prevailed on the Israeli government to allow more Israeli cars into Jenin so that Israeli Arabs could shop there, helping to start an economic revival.

Mr. Harden is now trying to bring those lessons home to Maryland, where he grew up. On a recent Saturday, he squinted out at Chesapeake Bay, riffing about how to promote local economic development with Capt. Rob Newberry, the head of the Delmarva Fisheries Association, which represents licensed watermen in the area. Captain Newberry is a Republican who once hung a sign cursing Joe Biden on his boat. But he supports Mr. Harden, who listens patiently to his complaints about regulations.

Captain Newberry represents people who harvest crabs, Maryland’s iconic cuisine, from the Chesapeake Bay, and he complains that excessive regulations are putting watermen like him out of business. He contends that the roughly 1,800 fishermen, clammers, crabbers and oystermen in his association are among the most highly regulated workers in the state.

“When you get halfway to work and you pull up at a stoplight, does a policeman pull you over?” he asked. “When you get into work, does he come in and bother you two or three times and ask you what are you doing, do you have a license? That happens to me every time I go out on the harbor.”

Captain Newberry has grievances with people across the political spectrum: with the environmentalists who lobby for more restrictions on the watermen; with the cities and companies responsible for faulty wastewater treatment systems and runoff that pollutes the bay; and with Mr. Harris, the incumbent.

He told me that Mr. Harris refused to speak out against a nonsensical regulation that stipulated that catfish had to be treated like meat under federal law. The rule, which advantages catfish farmers in states like Mississippi at the expense of foreign fish farmers and Maryland fishermen, requires federal inspectors to be on site when catfish get gutted, even though there’s little evidence of a risk to public health.

The rule is so outrageous that the Government Accountability Office once called for it to be repealed. Yet it remains in place. When the watermen complained to their congressman, Mr. Harris arranged for the government to pay for the inspectors. But inspectors still have to be called in whenever a fisherman brings in catfish for processing. (Mr. Harris’s office said he’s still working on it.)

Captain Newberry says he has become disillusioned with the political sausage-making behind government rules. But he still works within the system to try to change them. He testifies before lawmakers and serves on committees, hoping that it will make a difference.

However, those same frustrations have led some other watermen to fall under the sway of the “sovereign citizens” movement, which preaches that the federal and state governments have no right to require licenses for hunting, driving or owning a gun. Some adherents believe that the local sheriff is the only legitimate authority under the Constitution. Beliefs about the illegitimacy of the federal government appeared to be at the root of an armed standoff between federal authorities and cattle ranchers in Nevada in 2014.

Maryland’s Eastern Shore hasn’t seen anything like that, Somerset County’s sheriff, Ronald Howard, told me. But he said he has faced mounting pressure to defy state rules and allow watermen to harvest oysters from sanctuaries that have been declared off limits. He refused. “I said, ‘Look, if I interfere, that’s obstruction of my duties; I can be charged criminally,’” he told me. “I had one waterman tell me, ‘That’s a chance you’ve got to take.’”

Sheriff Howard doesn’t blame the watermen; he blames the rigid rules made by politicians who rarely take the time to listen to rural people. That’s where Dave Harden sees an opening for himself, however slim.

Democrats have to find a way to reconnect with rural America, Mr. Harden told me. Frank talk about regulations is a good place to start.