Vietnam, the 10-year American fiasco that foreshadowed the disastrous forever wars of today, was written into history as it happened. The war’s most famous chroniclers — David Halberstam, Neil Sheehan and Malcolm Browne — were young men, all.

But women journalists were there, too, reporting the war and risking their lives to bring back the story. I know because I was there learning from them. I arrived late in January 1973 and profited from the opening they made, and the example they set, by focusing on the humane questions of war.

Kate Webb, a revered combat reporter, taught me how to measure a bomb crater with my feet when we covered the carpet bombing of Cambodia. Ms. Webb rose to become bureau chief for United Press International in the war zone, covering more battles than most of her male colleagues. She was captured by the North Vietnamese in Cambodia in 1971 and held for 23 days. When she came out alive, her story was front-page news. An Agence France-Press prize for journalists working in “perilous or difficult conditions” in Asia was named in her honor. And yet though filmmakers in Hollywood promised to tell her story, in the United States today her name barely registers with anyone I talk to. Hers is not the only one. 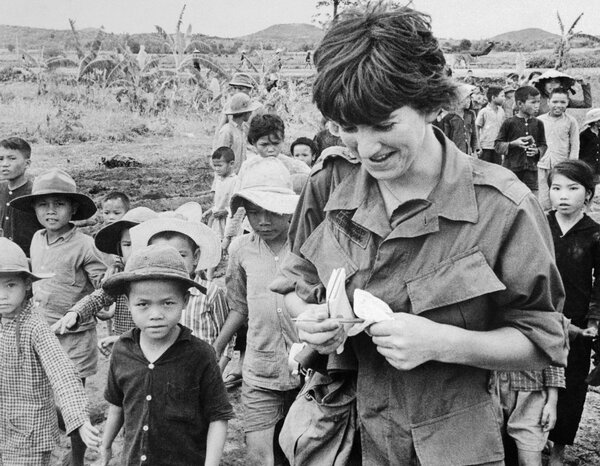 For self-protection as well as the cultural conditions of the era, the women of the Vietnam War did not tell their stories. Male journalists who wrote memoirs about their time during the war either left out the women or belittled their accomplishments, no matter how many awards the women had won.

As I set about reporting a book about the accomplishments of the women who preceded me in Vietnam, I focused on Ms. Webb, Frances FitzGerald, an American journalist and author of “Fire in the Lake,” a seminal book on the war, and Catherine Leroy, a French photographer. In the mid-1960s, newsrooms largely confined female reporters to the women’s-news section. These three women paid their own way to war, arrived with no jobs, no role models and no safety net. I found private notes these women wrote to themselves about the sting of slights, the unwanted advances, the compromises they made. Going public with those experiences at the time would have brought them ridicule and denial.

Though Ms. Webb wrote about her experience in captivity, she never published a longer memoir about her life. Ms. Leroy also attempted to write her story, but gave up in anger. Ms. FitzGerald was simply, maddeningly, omitted from the memoirs of the novelist Ward Just, her wartime lover. Instead of writing her own autobiography, she deposited all her papers, including Just’s love letters, in an archive at Boston University, where a writer like me could piece together her story half a century later.

Their female colleagues effectively sidelined, that left the men to tell the swashbuckling stories of journalists in Vietnam. And, in turn, those men left out the women writing and photographing images alongside them. Worse, they depicted women journalists as decoration, and ignored their contributions to war coverage.

The reasons for this erasure were myriad — and infuriating.

The mid-1960s were a perilous time for women venturing into a man’s territory, and none were more toxic than the battlefields of Vietnam. Peter Arnett, the Vietnam War correspondent, was open about the disdain all men felt for the women. “The prevailing view was that the war was being fought by men against men and women had no place there,” he wrote in his 1995 memoir, “Live from the Battlefield.”

And yet Ms. Webb herself insisted on denying gender bias. When Women’s Wear Daily described her in 1968 as a rare “news hen” among the male “news hawks,” in her interview with them she deflected attention and focused on the South Vietnamese Army’s need for M16 rifles. When she was named U.P.I. bureau chief in Cambodia, there was no press release celebrating this singular accomplishment for a woman in a war zone. Ms. Webb preferred it that way. And she denounced feminism because she didn’t want to be seen, she later wrote, as “a six-foot, fat, pistol-whipping women’s libber” who needed special help to do what men did. Only later, when Ms. Webb was undermined by a predatory boss who demanded she have an affair with him, did she fully understand the seriousness of institutional barriers that she thought she had conquered.

There is little sense of the injustice of gender bias in their work.

That’s not surprising; calling attention to their own work was dangerous. Catherine Leroy was the only woman combat photographer in the early years of the American war. Barely five feet tall, she pioneered an intimate style of combat photography and was soon a serious competitor to her male counterparts.

Her colleagues weren’t pleased. Led by the bureau chief of Agence France-Presse, they collaborated with military press officers to strip her of her press credentials. They filed shameless complaints against Ms. Leroy for being pushy and “unwashed,” someone who “used coarse and profane language.” This was character bashing — not legitimate reason for taking away her credentials — yet the men prevailed. (I retrieved the confidential military file through a Freedom of Information Act request.)

Ms. Leroy fought back, recovered her press card and continued to excel. She parachuted with the 173rd Airborne Brigade to photograph the only air assault of the war; she captured the indelible image of a medic crying in anguish during the Battle of Hill 881 and crossed enemy lines to photograph the North Vietnamese barricade in Hue. She became the first non-American woman to win the George Polk Award in photography and, later, the first woman to win the Robert Capa Gold Medal.

Yet in memoirs, and in their interviews with me, Ms. Leroy’s male colleagues remembered her largely for her foul language and her many amorous affairs.

While Ms. Leroy was belittled, Frances FitzGerald was dismissed for her privilege. Ms. FitzGerald turned her back on standard battlefield coverage and concentrated on the deprivations visited upon the people of Vietnam: their country, culture, history and landscape. She reported from the slums of Saigon, the wretched civilian hospitals and the villages forcibly emptied under American war policies. She spent years researching the essential questions about the war from the Vietnamese point of view, concluding that the United States could not win. That was one of the messages in her 1972 book “Fire in the Lake.” It took home prize after prize, including the Pulitzer, in nonfiction writing, the National Book Award and the Bancroft Prize, beating out Halberstam’s “The Best and the Brightest,” which was published the same year.

“Fire in the Lake” is “of enduring importance,” the Vietnam War scholar Fredrik Logevall told me. “It filled a void and was an extraordinary influence.”

And yet the accolades and the fame that came with it did not sit well with the Vietnam War correspondents. The backlash was intense and sustained. Many journalists and academics accused Ms. FitzGerald of raising questions about Vietnam that only academics could answer. They claimed that she made mistakes about Vietnamese culture and history and that as a journalist she wasn’t qualified to write such a book. Her colleagues derided her family’s wealthy background, and labeled her a dilettante. When Ken Burns created a reading list for “The Vietnam War,” his 2017 documentary, “Fire in the Lake” had been left off. (It was added after my book appeared.)

And so the work of the women I looked to as role models has gradually slipped away from public memory. The women chroniclers of Vietnam were relegated to a footnote in history, denied their rightful place as pioneering war correspondents.

By the time America fought in its next major engagement — the 1991 Persian Gulf war — and women covered the war with their male colleagues as salaried staff correspondents, they had no idea who to thank for opening the way.

Elizabeth Becker, a former Times correspondent, is the author most recently of “You Don’t Belong Here,” a biography of three of the women war correspondents of the Vietnam War.