Opinion | I Got Covid at Rikers. I’m Still Suffering.

When I arrived on Rikers Island in January 2019 to await trial for an assault charge, I knew it would be dangerous — after all, the women’s jail is notorious for chronic abuse, unsanitary conditions and violence. But what I did not know was that I would become one of hundreds of inmates at Rikers to contract the coronavirus.

I remember watching the TV in early March 2020 when a lawyer from Westchester County was reported to be the source of several cases in New York.

In the beginning, none of the officers wore masks. When we asked why, officers said they were told the masks would scare us. But we were already scared. We were glued to the television, watching Governor Andrew Cuomo’s daily news conferences. It was the only time we did not argue over what to watch.

All eyes were on New York, particularly Queens, as the virus’s epicenter, but to us, Rikers felt like ground zero. In mid-March, a guard at the main gate tested positive. Soon after, we heard the virus had hit one of the dorms, where inmates sleep as many as 50 to a room and beds have only an arm’s length of space between them.

When a woman in my dorm started coughing in late March, we were placed in quarantine. A poster on our door warned others not to enter. Other posters instructed us to do the impossible: Practice social distancing. Officers told us to sleep head to toe, supposedly because it would decrease transmission risk. Yet they still came in to conduct searches, lining us up shoulder-to-shoulder against the wall while they rifled through our belongings. We were not getting tested regularly.

All programs and services were canceled, including religious meetings. Cut off from those daily group meetings, like Alcoholics Anonymous that were led by counselors, we felt lost. We tried to keep them going on our own. We’d cite the Serenity Prayer — “God, grant me the serenity to accept the things I cannot change.”

From my dorm, I had a penthouse view of La Guardia Airport, where I watched it come to a screeching halt. Planes were usually 15 deep waiting for the runway. Now the runways were empty. It seemed like no one was coming to or leaving New York.

Women in my dorm were breaking down on the phones, yelling, “Get me out of here. I DON’T WANT TO DIE!” to their lawyers on the other end. I was 47 years old at the time, and I did not have pre-existing conditions. And yet, I felt frustrated when my lawyers explained that they had to prioritize the release of those deemed “high risk” for complications from Covid.

Rumors started swirling that we were running out of supplies like soap. Inmates hoarded toilet paper. We could not buy hand sanitizer, and the closest thing we had to bleach was really just mold and mildew remover.

I first got a headache in early April. Then I felt short of breath when I was cleaning the shower. I lost my sense of smell. I thought it was all in my head, but I knew I was in trouble when I started coughing.

I was placed in a small cell by myself where I slept all day. A nurse and doctor checked on me to take my temperature, take a pulse/oxygen saturation reading and prescribe medication like antibiotics and pain pills. An on-duty officer would do rounds every 15 minutes to make sure I was still alive.

After seven days in isolation, I was sent back to my dorm. It was my 48th birthday that day.

I eventually tested positive for Covid antibodies and contacted a bail relief advocate who helped me post bail. She arranged with the mayor’s office for me to go to a hotel upon my release on June 5. When I was being discharged, a doctor informed me I had Stage 3 kidney failure. Covid was the culprit. 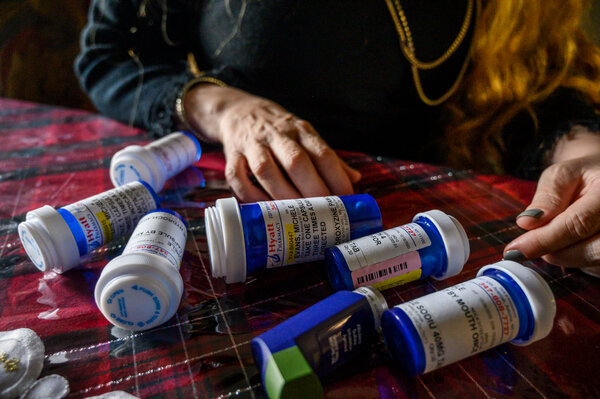 The world was not as I left it. The city was engulfed in protests and pain. There was a curfew in place. I wasn’t used to it. I barely left my room and spent my time curled up in bed. Eventually, I moved to transitional housing, where I currently live.

I am now what is known as a Covid long-hauler: someone who feels the health effects of the disease for weeks or months. I have memory problems and heart palpitations. I am experiencing hair loss; it comes out in clumps. I battle fatigue and shortness of breath daily. I live on the third floor and have to pause on each landing because of how winded I am.

What happened in prisons during this pandemic is criminal. As hard as it is to rebuild your life after serving time — particularly for women — there are those who are trying to do it while also battling the long-term effects of Covid. I should have never gotten sick. Inmates are still getting sick. More than 2,300 prisoners around the country have died from Covid since March. It’s completely unjust. And in New York, Governor Cuomo, Mayor Bill de Blasio, our district attorneys and others have not done enough to facilitate the release of people from custody. Governor Cuomo still has yet to make the vaccine available to incarcerated New Yorkers; governors in other states have already begun this process.

Though courts are beginning to reopen, the wheels of justice turn slowly. For my health, it is too little too late.