Opinion | Kyrsten Sinema and the Politics of Narcissism 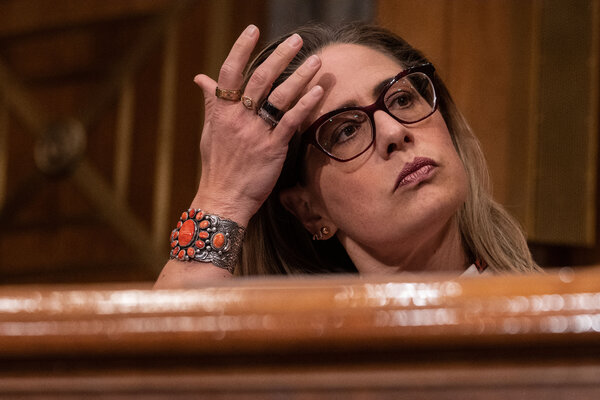 In the self-congratulatory video that Senator Kyrsten Sinema of Arizona made to announce that she was leaving the Democratic Party and becoming an independent, she didn’t mention any disagreements with her former caucus about issues. Instead, she framed the move as a step toward self-actualization. “Registering as an independent, and showing up to work with the title of independent, is a reflection of who I’ve always been,” she said.

It’s true: This is who she’s always been. The content of Sinema’s politics has changed over time, from Green Party progressivism to pro-corporate centrism. Her approach to elected office as a vehicle for the refinement of the self has not.

In Sinema’s 2009 book “Unite and Conquer: How to Build Coalitions That Win — and Last,” she described giving up shrill partisanship, which was making her unhappy, for a vaguely New Age ethos that prized inner tranquillity. One chapter was called “Letting Go of the Bear and Picking Up the Buddha,” with the bear representing fear and anger. “Picking up the Buddha (becoming a super centered political actor) makes you a stronger, more effective you,” she wrote. “To be your most fabulous political self, you’ll need to learn to recognize the bear and learn to let go of it in your work.”

Transcending fear and anger is an excellent spiritual goal. But becoming a more centered and fabulous person is a political project only when it’s directed toward aims beyond oneself. With Sinema, it’s not remotely clear what those aims might be, or if they exist. (Another chapter in her book is “Letting Go of Outcomes.”) Announcing her new independent status, Sinema wrote an essay in The Arizona Republic and gave interviews to outlets including Politico and CNN. Nowhere have I seen her articulate substantive differences with the Democrats, aside from her opposition to tax increases. Instead, she spoke about not fitting into a box, being true to herself, and wanting to work, as she told Politico, without the “pressures or the poles of a party structure.”

Until recently, Sinema has seemed to delight in the power an evenly split Senate gave her, which she used to benefit the financial and pharmaceutical industries. Negotiating the Inflation Reduction Act, she single-handedly stopped Democrats from closing the carried interest loophole, a provision that significantly cuts the tax bills of Wall Street investors. And Sinema insisted on narrowing the part of the law meant to bring down prescription drug prices, earning criticism even from Joe Manchin, the centrist West Virginia Democrat with whom she is frequently aligned.

“One of her deep flaws is that she doesn’t realize our actions have impacts every day on people who need our help,” said Ruben Gallego, a Democratic Arizona congressman who’d been considering a primary campaign against Sinema.

For much of this year, Sinema appeared to be preparing for a future in a Senate run by the Republican Mitch McConnell. In September, at a cozy appearance with McConnell in Kentucky, she said, “As you all know, control changes between the House and the Senate every couple of years. It’s likely to change again in just a few weeks.” She described McConnell as a friend, and he praised her as the “most effective first-term senator” he’d seen in his career.

Had Republicans won the Senate, Sinema could have become an independent who caucused with Republicans, preserving her place in the majority. A red wave might have seemed to vindicate her aggressive centrism, especially if Senator Mark Kelly, an Arizona Democrat far more loyal to his party, had lost. But Kelly won and Democrats picked up a Senate seat. That meant Sinema could no longer hold the rest of the Democratic caucus hostage, or argue that only Democrats who defy their base are electable in her state. She was about to become a lot less relevant. Now she’s center stage again.

For the immediate future, Sinema’s move is unlikely to have major national political consequences. She has refused to directly say whether she will caucus with the Democrats. Speaking to CNN’s Jake Tapper, she shrugged off a question about the balance of power in the Senate, saying, “That’s kind of a D.C. thing to worry about.” Her answer was an insult to all the Arizonans who care very much which party controls the Senate, but it was also a deflection. Sinema ruled out caucusing with Republicans and said she intends to keep her committee assignments, which she can do only by aligning with Democrats. However much she values her own uniqueness, there are no parties of one in the Senate.

The real significance of her defection will come in 2024, when she is up for re-election. Had she remained a Democrat, Gallego could have been a strong primary challenger. Many of those who supported Sinema four years ago have been enraged by the way she’s obstructed popular liberal priorities, and a recent AARP poll found that only 37 percent of likely Democratic voters in Arizona had a positive opinion of her.

It will be harder for Democrats to challenge her in a general election, where a three-way race would risk a Republican victory. But Gallego, who said he will decide on running next year, insisted that the threat of Sinema acting as a spoiler won’t shape his decision. “No matter what, I’m not going to base my decision off this false threat that she’s trying to put on,” he said, arguing that she doesn’t have enough support “to put together a coalition that will affect the Democratic nominee.”

That might be too optimistic — Sinema wouldn’t need to get that many swing voters to thwart a Democrat. But he’s right that she doesn’t have a winning coalition herself. In the AARP poll, a decisive majority of voters in every demographic group, including independents, viewed her unfavorably. It’s one thing to be independent on behalf of your voters. It’s another to be independent from them.