Bret Stephens: Well, Gail, President Biden just signed the biggest stimulus bill in history, Andrew Cuomo is facing mounting pressures to resign and the only thing people seem really interested in is … Harry and Meghan versus the House of Windsor.

Gail Collins: Well Bret, in a perfect world we’d start out with Biden’s transformative pandemic bill: $1.9 trillion for reopening schools, juicing the economy, beating back the coronavirus and bailing out the exhausted cities and states.

Gail: If his prediction comes true and families can have Fourth of July celebrations with their friends this summer, without infecting anybody, that’s … political magic. We’ll remember President Biden as the guy who gave us back fireworks and little kids splashing around in the swimming pool and adults sitting in comfy picnic chairs, drinking a beer or two with their friends.

Bret: I prefer to credit the people at Pfizer, BioNTech, Moderna, Johnson & Johnson and other pharmaceutical companies. Three cheers for private enterprise! But I thought Biden was very canny in choosing July 4 as reopening day. A new birth of freedom.

Gail: OK, I got carried away. Let’s start off with those Windsors. Give me your royal family ruminations.

Bret: I’m rooting for Prince Philip to make it to his 100th birthday in June. Otherwise I’m in the plague on all their Houses camp. Meghan Markle as a victim of evil royal intrigues? Count me as skeptical, given how deeply invested the Windsors seemed to be in her success as a 21st century fairy-tale American princess. Harry as Prince Rescue Chicken? The poor guy looked to me on TV like he was quietly praying to be rescued by the Special Air Service. Queen Elizabeth as the long-enduring monarch? Her son Charles is 72 and she still won’t give him a proper job. (Not that he’s such great shakes, either — although consider his brother.)

Bret: Think of him as the Earl of Epstein. As for the idea that the royals are victims of a modern-day Wallis Simpson, this is a family that, unlike most of the other monarchies of Europe, has cultivated celebrity as part of its business model, turning even minor family members into public figures likely to attract relentless scrutiny and inevitable scandal.

OK, please tell me to stop rubbernecking this pileup so we can talk about things that matter.

Gail: Hey, it’s a treat to get to poke at the royal family. So relaxing. I have to admit I’m not as anti-Meghan as you are. An actress from the outside world suddenly dumped into a business where you’re constantly being dragged around to meet-and-greet events under the thumb of what seems like a very bossy bureaucracy of royals-handlers.

Bret: I’m sure she had no idea of what she was getting herself into when she married Harry. She was only 36 at the time.

Gail: Either way I’m on your side when it comes to the rest of the team. Besides the extremely depressing sight of having Elizabeth and Philip keeping the top jobs for themselves even when they’re both in their 90s, you’ve got their son Charles, utterly charmless and heir to the throne. God knows how long he’ll last before the crown goes to Prince William, whose current job mainly seems to be saying “we are very much not a racist family” in the most modulated tones possible.

Bret: Gail, I think we can agree that the founders were wise when they told the Hanoverians to get lost. Another reason to celebrate the Fourth of July.

Gail: And hey, once again we have an angle that makes Joe Biden look great. Granted, he’s 78, but I guarantee he won’t be around trying to run things when he’s Elizabeth’s age. Good old Joe, possibly the most powerful man in the world but also husband of a teacher, doting grandfather. Both he and the queen are dog owners, but you’re talking about pedigreed Welsh Corgis versus a couple of large German shepherds — one of which is a rescue dog. 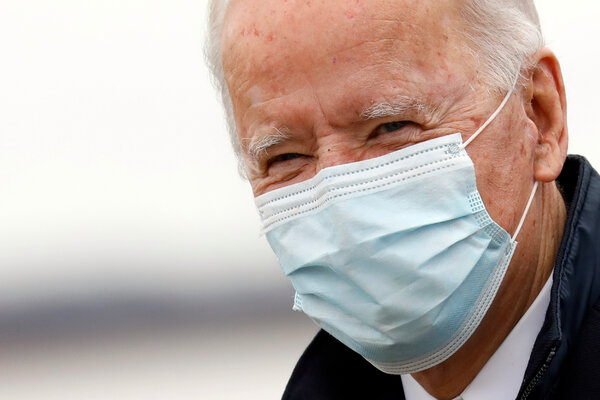 Bret: Everything about the Biden administration is so refreshingly normal, Gail, including the return of canines to the White House after a four-year absence. Biden makes my job as a columnist a lot harder, because it’s so difficult to invest any moral indignation in my policy disagreements. If the former administration made America feel like it was living through a remake of “V for Vendetta,” the current one has a distinctly “Cocoon” feeling to it.

Gail: On to Andrew Cuomo and allegations of sexual harassment. Biden, of course, has … a background. The Anita Hill hearings and his own history as a serial hugger. The big difference, for me, is that his handsiness wasn’t accompanied by meanness or aggression directed at young, relatively powerless women. And I think he came to the presidency with lessons learned.

Bret: Tara Reade claims otherwise, of course, but I believe in innocent till proven guilty.

Gail: Also, of course, Biden was burdened with suspicion and scandal surrounding the business dealings of his son, Hunter. But Hunter’s faded from the picture. When it comes to bad boys in politics, right now the spotlight is entirely on Andrew Cuomo.

Bret: The Cuomo situation is to the Hunter situation approximately what the eruption of Mount St. Helens was to my childhood experiments involving baking soda, vinegar and dish soap.

Gail: The Cuomo business has exploded so fast, it makes me nervously look across the national map and wonder how many other states have serious sexual issues in their highest offices.

Bret: A strong argument for more women as governors, though I’m sure there are people on both ends of the ideological spectrum who will be mad at me for saying this.

Gail: Well, let’s just stop and mention that 16 percent of our current governors are women. And in all American history there have been 44, which is less than an average of one per state. And that one of the states scoring zero is New York.

Bret: That’ll change if Cuomo goes, given that our lieutenant governor is Kathy Hochul — about whom I confess to know exactly nothing. Sorry, go on.

Gail: It’s never been a big secret that the governor got much of what he wanted politically by yelling and threatening and spreading fear among his fellow Democrats.

Now as more women are coming forward to tell their stories, there’s a strong current of bullying combined with the tales about a sudden hand on the back, or a kiss on the mouth or, in one reported account, a hand down a blouse.

Bret: Much as I dislike Cuomo and think the charges against him are serious, he’s challenged some of the accusations and deserves a chance to defend himself, just as Biden did when it came to Reade. And the moment Kirsten Gillibrand called on Cuomo to step down, all I could think about was how unfair she was to Al Franken during the former Minnesota senator’s own overhyped MeToo moment. For better or worse, Cuomo was elected by the people of New York, who knew they were getting a brass-knuckled centrist Democrat, and that fact deserves some respect.

Where I think Cuomo is really vulnerable is in the way his administration deliberately misled the public over the number of nursing home deaths, in part to burnish Cuomo’s reputation and even enhance his income. That’s what strikes me as clearly impeachable.

Or am I badly understating the gravity of the harassment issue?

Gail: I’d vote for understating. Mainly because we’ve passed the point where an important politician can just claim not to have understood the new rules.

Bret: A fair point, particularly since Cuomo was so outspoken in denouncing Brett Kavanaugh. I still think the governor deserves the chance to make his case, even though it looks like Birnam Wood is fast approaching his Dunsinane.

Gail: Well, one thing I have to give the royal family is that they’re all basically paid to be a national diversion. So that their tawdry scandals are, at least occasionally, sort of enjoyable.