Like many people I know, I have lately been bewitched by the television show “Ted Lasso,” which made its endearing debut on Apple TV+ this summer. I started devouring it at nearly the same moment I began the most recent season of Jonathan Goldstein’s near-perfect podcast, “Heavyweight,” and while I was gobbling the remains of Season 2 of “Sex Education,” a beloved series on Netflix.

None of these choices was accidental, I now realize. I was unconsciously gravitating toward them as a kind of post-traumatic therapy. Serotonin in pixels, oxytocin in bytes.

Part of the appeal of these series is that goodness and decency win, each and every time. (Squint, and Ted Lasso is President Biden with a mustache and a fondness for baking.) They also involve story lines in which the central characters slowly gain control over key aspects of their lives — subduing the ungovernable, making sense of the illegible, closing open loops.

But what moved me more than anything else? They’re about repairing the world bond by bond, one broken relationship at a time. For this particular moment, they’re the perfect entertainment Rx.

In his Inaugural Address, Biden rattled off a dire inventory of crises we face as a nation: The assault on truth. The assault on democracy. Climate change, the coronavirus, our badly damaged international alliances. Runaway income inequality. Poison wells of racism that seem to never run dry.

Any one of these problems would be daunting, he noted. Together, the sheer scale overwhelms. If you’re an average citizen with average means and average time at your disposal, you could be forgiven for hearing that list and taking to your bed.

What’s so emboldening and life-affirming about these three series, I think, is that they offer a vision of making a difference that’s actually achievable in scale. Small kindnesses. Mending rifts. Rebuilding communities, even if that community is just a bunch of demoralized soccer hooligans.

A quick précis, if you’re unacquainted with the joys of these shows:

Ted Lasso is a rube savant from Kansas who’s been recruited to take over an English soccer team, though the only kind of football he knows is the American variety. What he doesn’t know is that he’s been cynically set up to fail — the team owner badly wants revenge on her philandering ex-husband, and what better way than to slowly euthanize his precious team? But but but: Lasso is so largehearted that even the most brittle creatures soften in his presence, and his solution to coaching a sport whose rules elude him is simple: Unknot the psychological difficulties of individual players, one at a time, until they all play well with one another.

I am now rereading this and thinking I’ve made the show sound almost criminally cheesy. It isn’t. It is wickedly funny (I mean, Jason Sudeikis) and committed to a certain kind of outlandishness; the humor just doesn’t come from a place of anger.

Moving on: “Sex Education”! It has all the delights of the best shows about adolescents: operatic crushes, intense friendships, complicated families, high school Babylon, vexed sex.

But what got me hooked wasn’t really any of those things. It was, again, the notion of healing the world person by person, even if that person is the school thug. The male protagonist, Otis, is the child of a sex therapist, and though he’s woefully inexperienced in the ways of all flesh, he has absorbed enough of his mother’s craft to start a sex-therapy clinic with a friend. He understands that most problems in the sack involve emotions, rather than hydraulics, and his counseling, almost always, is to get his fellow students to embrace the shame-parts of themselves. 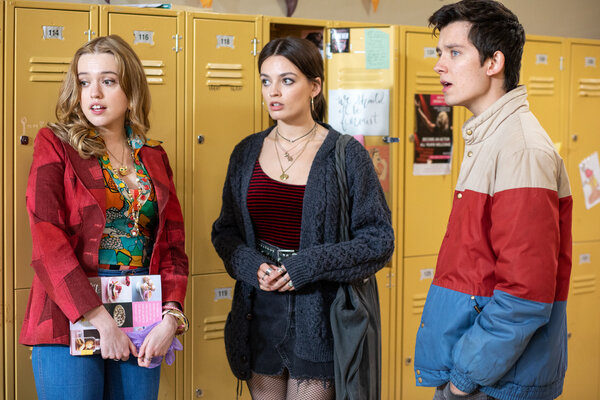 And finally, the podcast “Heavyweight,” perhaps my favorite of the lot. The conceit is so simple and so satisfying that it’s kind of amazing a previous incarnation didn’t exist on radio or TV. The host, Jonathan Goldstein — whose comic gifts are matched only by his awkwardness — undertakes the improbably sentimental task of resolving emotional burdens people have carried around for years. He’s in the closure business, which often means answering questions or confronting long-deferred tasks. As in: Say, can you help me scatter my dad’s 16-year-old ashes on the 18th hole of a private golf course? Or: Say, can you tell me why I was dumped by those girls way back in middle school?

Or most famously, in the show’s early breakout episode: Say, can you tell me why Moby never so much as thanked me for lending him my box set of Alan Lomax’s “Songs From the South,” much less returned it? Because hello, sampling them is what made him a superstar.

Goldstein is a time-traveler, part shrink and part detective, helping to rewrite the self-punishing, misconceived stories people tell themselves — or to give them a story in the first place, where once there was none. And stories are crucial to being able to make sense of old traumas.

For many Americans, the Trump years were a pretty traumatic experience. If one of the hallmarks of trauma is powerlessness — this I learned from the psychotherapist and author Daphne de Marneffe, who memorably described life under Trump as an endless joy ride with a drunk at the wheel — here are shows with protagonists who show others how to take custody of their troubles.

If another hallmark of trauma is that it’s always humming in the background, even if it’s on an invidious frequency we can’t detect — “the body keeps the score,” as the psychiatrist Bessel van der Kolk wrote in his popular book of the same name — well, here are stories that allow us to cry and find release.

And if yet another hallmark of trauma is avoidance and withdrawal, here are stories that allow us to imagine salvation in altruism and connection.

Our connections — with individuals (friends, neighbors) and communities (civic organizations, neighborhood groups, religious institutions) — have been in decline for decades in America. Strengthening them has been a preoccupation on both the left and the right, from the scholarship of Robert Putnam to the policy work of Oren Cass.

All of us yearn for those lost bonds, in quarantined life more than ever.

So yes: What were once fissures in American life have now become canyons, and many of our woes are as wide as the world — literally, in some cases, like global warming and re-establishing international trust. Yet whenever I’m listening to or watching these stories, I am reminded that we needn’t be crippled, necessarily, by the immensity of the difficulties ahead. Sometimes it pays to think small.