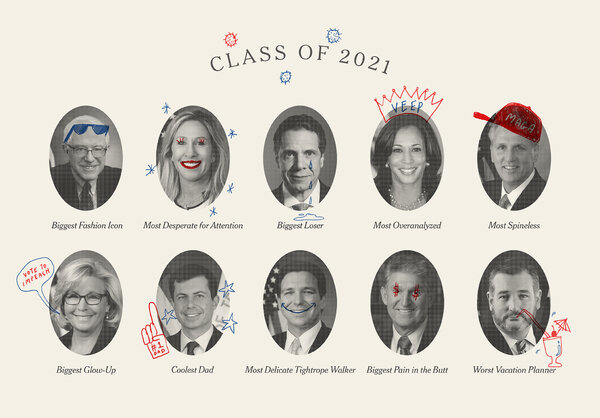 Ms. Cottle is a member of the editorial board.

Well, that was weird.

Much of the past 12 months felt as though 2021 came about by looking at the political insanity of 2020 and thinking smugly: Hold my beer.

As usual, a smattering of people and events managed to rise above, or sink below, the baseline chaos. These notables deserve to be commemorated — and, in some cases, subpoenaed — for their roles in making 2021 so very memorable. As he was last year, Donald Trump was deemed ineligible to compete, as he continues to operate in a political reality all his own.

Biggest Pain in the Butt
Senator Joe Manchin
It’s not simply that the West Virginia Democrat spent the year obstructing his party’s legislative goals. Or that he wasted weeks claiming to be scrounging for Republican buy-in on voting rights legislation. Or that he apparently regards his constituents as a bunch of slacker welfare cheats. It’s that he insisted on being such a pious, pompous, pointlessly destructive prat about the whole thing. Mr. Manchin should take his houseboat, his coal-company money and his folksy pretensions and blow them out the tailpipe of that Maserati he was seen tooling around in.

Most Perplexing
Senator Kyrsten Sinema
We get it: The Arizona Democrat does not want to be seen as a line-toeing party drone. But what she does want remains a mystery to most Americans. Her maverick-without-a-cause shtick ticked off many Democrats, including voters back home, and spawned a “Saturday Night Live” parody of Ms. Sinema as a contrarian agent of chaos.

Worst Vacation Planner
Senator Ted Cruz
When a storm left millions of Texans shivering in the cold and dark in February, the Republican lawmaker and his family promptly fled to a luxury resort in Cancun. The social media backlash was swift and brutal, shaming Mr. Cruz into a quick return home.

Biggest Loser
Andrew Cuomo
And just like that, the former New York governor’s brand went from pandemic rock star to alleged serial harasser. Mouthy and handsy turns out to be a bad combo.