Donald Trump promised to make the world respect and fear America. In the end, he accomplished neither. He has made a laughingstock of America and its democracy. Nobody could blame Russian, Chinese or Iranian leaders for thoroughly enjoying what they saw on Jan. 6 as a mob incited by the president ransacked the Capitol.

The scenes looked like something out of a “color revolution,” the street protests in Ukraine and Georgia that toppled governments and sent shivers of fear down many authoritarians’ spines: irate citizens, propelled by social media, protesting what they viewed as fraudulent elections and calling for democracy, draped in the American flag. The only difference was that this time it was not an opposition candidate but a sitting American president protesting a “rigged election,” and the storming took place in the United States.

There is already an abundance of commentary on the impact of Mr. Trump’s mutiny on American democracy. We can only hope that the attack on Congress was the final battle of the last Civil War, not the beginning of a new one. The 19th-century German chancellor Otto von Bismarck is often said to have asserted that “God has a special providence for fools, drunkards and the United States of America.” If he was right, we have reason to believe that America will eventually transcend its current crisis. But what happens in the meantime?

The storming of the Capitol and the growing prospects of Mr. Trump’s impeachment in his last hours in power have showcased not simply a crisis of American democracy, but a crisis of American power. Next to Washington’s monumental failure to respond to the coronavirus pandemic, Washington law enforcement’s inexplicable failure to prevent protesters from invading the Capitol makes America look dysfunctional and weak to its enemies — and unreliable to its allies. (It didn’t help that this occurred just weeks after the humiliation of America’s cybersecurity defenses in the case of Russia’s hacking of at least 10 federal agencies.)

Americans will soon have a new president, but they won’t have a new country. Four years of President Trump will continue to reverberate around the world, no matter how eager President-elect Joe Biden is to move on. This will assuredly affect the two core priorities of the new administration’s foreign policy: its hope to build an effective alliance of democracies in defense of a liberal order and its effort to put together a common American-European response to the rise of China and its authoritarian allies.

Mr. Biden reportedly plans to convene a “summit of democracies” early in his term. But can the new administration legitimately return America to its role as the leader of the free world when its own democratic system is in a shambles? Should Trump-like political leaders such as Recep Tayyip Erdogan of Turkey and Jair Bolsonaro of Brazil be invited to such a summit? Will inviting them not be read as giving democratic legitimacy to the new authoritarians? But if Washington keeps such governments out of the democratic club, won’t that be a gift to Russia and China, which are trying to cultivate their own club?

Jake Sullivan, whom Mr. Biden plans to appoint as his national security adviser, has made it clear that he sees the establishment of a coordinated trans-Atlantic policy toward China as a pillar of the new administration’s foreign policy. Just a week ago, many European leaders tended to agree with Mr. Sullivan that only by acting together could Europe and America respond to the rise of China and its authoritarian allies. But how realistic is it now?

My guess is that under the current circumstances, it can turn out to be more problematic than many well-intentioned members of Mr. Biden’s foreign policy team assume. This is not because Europeans are blind to China’s hegemonic ambitions or because they have been charmed by its big-data authoritarianism. It’s not because German business is eyeing the Chinese market opportunities or because the European Union’s foreign policy is especially risk-averse.

The reason is far more straightforward: a fear of America’s weakness. 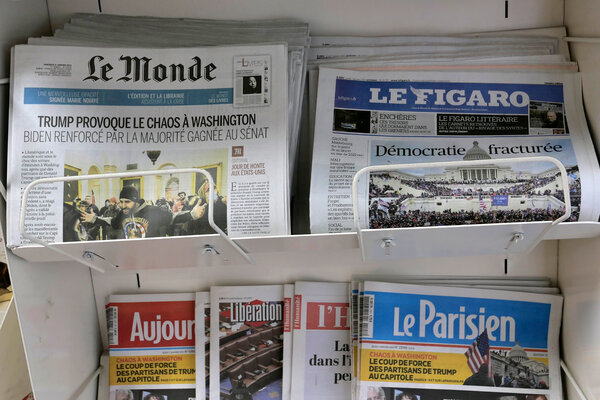 A survey commissioned by the European Council on Foreign Relations in the weeks after the American elections and to be published on the day of Mr. Biden’s inauguration reveals that most Europeans are skeptical that the new president will restore America’s global leadership. A majority of citizens in every single country surveyed are convinced that in the next 10 years, China will overtake the United States as the leading global power. Even more worrying, a majority of Germans believe that after electing Mr. Trump, Americans can no longer be trusted as a predictable ally. In short, the pro-Trump rioters’ attack on Congress was the president’s last but also most effective attack on America’s alliances.

It was Bill Clinton who declared that the key task for Americans would be “to create a world we would like to live in when we are no longer the world’s only superpower.” As Mr. Biden enters the White House, the United States is no longer the only superpower. Unfortunately, the world in which he will govern — marked by the rise of authoritarian powers and the spread of nationalism and inequality — is not the one in which either Americans or Europeans would prefer to live.

For the past century, America’s power has also represented the power of democracy. In the days after the storming of the Capitol, democratic leaders in Europe cannot take the resilience of American democracy for granted, nor the standing power of America’s global influence.

Ivan Krastev is a contributing Opinion writer, the chairman of the Center for Liberal Strategies, a permanent fellow at the Institute for Human Sciences in Vienna and the author, most recently, of “Is It Tomorrow Yet?: Paradoxes of the Pandemic.”