Home » Analysis & Comment » Opinion | The Capitol Was Just the Start

Opinion | The Capitol Was Just the Start

Listen to This Op-Ed

To hear more audio stories from publishers like The New York Times, download Audm for iPhone or Android.

These were not just the Trump loyalists of lore, that economically marginalized, over-elegized white working class of the heartland. No, the crowd that stormed the Capitol was a big tent of whiteness, a cross-section of American society bridging divisions of class, geography and demography. They were doctors and lawyers, florists and real estate agents, business executives, police officers, military veterans, at least one elected official and an Olympic gold medalist. They’d all come to coup for America.

What had drawn together this motley mob, other than race and party? A preposterous lie incubated in a digital-media fantasyland.

Just as tech C.E.O.s had once boldly envisioned, disparate strangers from across the land really had come together online to forge common purpose out of shared philosophy. That the philosophy was conspiratorial lunacy and the common purpose insurrection — well, nobody’s perfect, I suppose.

It isn’t just the crowd’s variety that was striking. I’ve spent the past few days watching as many videos from the siege as my eyeballs could handle, and what terrifies me again and again is the sense of surprise and entitlement — the authentic shock so many of the rioters expressed when confronted with a reality that did not match the cosplay revolution they’d dreamed about on Discord.

One way to think about the attack on the Capitol is as a clash between long-festering, partisan digital fantasy and stark physical reality. What scares me is that even with reality flash-banging all around them, the rioters still clung like stubborn barnacles to their online fantasy. Their mental model of America could not be undone even by the events playing out before their pepper-sprayed eyes — a depth of indoctrination that really does not bode well for our future.

The fantasists did not achieve their objective last week, and it may look as if the conspiracy is reeling. President Trump is gone from Twitter and soon from the White House. Rioters are being arrested and charged by the dozens. QAnon — the collective delusion alleging that America is run by a cadre of pedophiles whom Trump is fixing to take down — a major presence in the crowd, has been kicked off the respectable web, and hate-filled redoubts like Parler are on their heels.

Yet none of this is over — far from it. Now that the conspiracy mob has effected such carnage on the real world, we’d be foolish to suppose that its appetite has been sated, rather than only whetted. Monstrous online lies are not done with us. The Capitol is just the beginning.

Consider how careless and casual they were about committing federal crimes. They’d flown in to undo an election as if it were no bigger deal than a weekend getaway. They expected to march on the Capitol, restore Trump to the throne, memorialize the moment for Instagram and then travel home unscathed, as if what happens in Washington in broad daylight with the world’s news media watching stays in Washington.

Many were shocked that the police put up any resistance at all. “We backed you guys this summer!” a man can be heard shouting at the police, probably in reference to Black Lives Matter protests. “When the whole country hated you, we had your back!”

“This is not America,” Andrew McCormick of The Nation overheard a woman saying. “They’re shooting at us. They’re supposed to shoot B.L.M., but they’re shooting the patriots.”

In a clip that went viral for its obliviousness, a woman who identified herself only as “Elizabeth from Knoxville, Tennessee” complained to Hunter Walker, a reporter for Yahoo News, that she’d been stopped at the door.

“I made it like a foot inside and they pushed me out and they maced me!” she cries. When Walker asks her why she wanted to go in, she’s exasperated at his ignorance. “We’re storming the Capitol, it’s a revolution!”

The incongruousness is remarkable: She was there to overthrow the government of the world’s largest superpower, but nobody told her there would be mace. 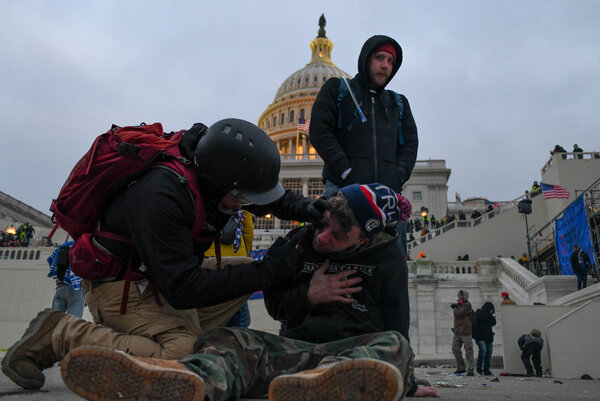 Even death could not shake their righteousness. Justin Winchell, a Trump supporter from Georgia, traveled to the rally with a friend, Rosanne Boyland. At one point the pair were in a scrum of people inside the Capitol when a fight erupted between rioters and the police. Winchell told a reporter for a Georgia television station that Boyland was crushed in the scuffle — she was one of the five people who were killed during the siege.

But even after seeing his friend walked on by Trump’s supporters, Winchell could not see how Trump was to blame. He was shocked when the TV reporter asked him if the president “has blood on his hands.”

“Does he have blood on his hands?” Winchell says, incredulously. “No!” He goes on to argue that antifa and other “outside instigators” were to blame: “She was killed by an incited event and it was not incited by Trump supporters.”

Do you see why I worry the internet’s ugly alternate reality isn’t done with us? When online rumor gets its fangs in you, its bite goes deep.

Legal trouble may shake the rioters’ delusions. Lounging with his feet up on a desk in Nancy Pelosi’s office, Richard Barnett looked as if he’d conquered the world; in his booking photo he’s vaguely stunned, the look of a man who has just had cold truth splashed in his face. An attorney for Jake Angeli, the horned, shirtless fellow who calls himself the “QAnon Shaman,” told a judge on Monday that Angeli had not eaten anything since his arrest on Saturday. His mother told reporters that he requires a strict organic diet. So I suppose it’s possible that jailhouse menu options may deter future conspiracy-fueled mobs.

But my optimism runs thin. Even if internet companies are now, belatedly, taking action against the forces that led to last week’s riot, the conditions that led us to the brink remain unchanged. The internet is still ruled by viral algorithms and advertising metrics that prize outrage over truth. Vast swaths of the media, including the most popular corners of radio and cable news, are still devoted to unhinged propaganda. America is still a bitterly fragmented nation, and the whole thing could still blow up again with the slightest of sparks.

Farhad wants to chat with readers on the phone. If you’re interested in talking to a New York Times columnist about anything that’s on your mind, please fill out this form. Farhad will select a few readers to call.

The Times is committed to publishing a diversity of letters to the editor. We’d like to hear what you think about this or any of our articles. Here are some tips. And here's our email: [email protected].