Opinion | The Era of Vaccine Diplomacy Is Here

It is only natural that the American government and the American people have focused on getting coronavirus vaccines to as many of its people as possible, with the most vulnerable first in line. But as the pace of domestic vaccination accelerates, two facts are worth bearing in mind.

One is that the pandemic will not be vanquished anywhere until it is vanquished everywhere. Several known coronavirus variants are making their way around the world, and epidemiologists know more will evolve so long as the virus continues to spread, potentially challenging the efficacy of existing vaccines. South Africa, for example, halted use of the Oxford-AstraZeneca vaccine when it showed “disappointing” results against a new, more contagious variant of the virus that has made landfall in the United States.

The second fact is that while more than 45 million Americans, nearly 14 percent of the U.S. population, have received at least one dose of vaccine, and most high-income countries have launched their own vaccination programs, the Think Global Health project of the Council on Foreign Relations estimates that only 7 percent of low-income countries had vaccinated anyone at all as of Feb. 18.

That is a yawning gap. Dr. Tedros Adhanom Ghebreyesus, the director general of the World Health Organization, has correctly described it as “another brick in the wall of inequality between the world’s haves and have-nots.”

The good news is that the gap is finally being addressed. Last week, a cargo plane landed in Ghana with 600,000 doses of vaccine developed in Britain and manufactured in India, the start of a program to deliver at least 1.3 billion shots to 92 low- and middle-income countries this year through Covax, an international effort backed by the World Health Organization. 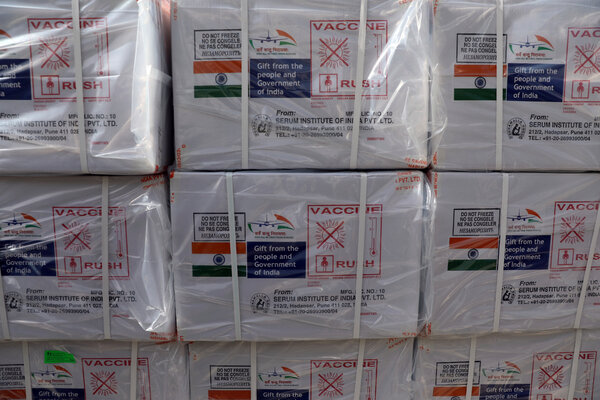 The effort has had a rocky start. Under the Trump administration, the United States pulled out of the W.H.O. altogether, and along with other wealthy nations it grabbed what vaccine it could for itself. But the Biden administration has moved quickly to rejoin the W.H.O. and has pledged $4 billion to the global vaccination drive. President Emmanuel Macron of France has further suggested that instead of money, wealthy countries should donate vaccine doses to African governments, sparing Covax the need to compete for existing supplies.

All this is just a start. The 600,000 doses that arrived in Ghana are barely enough to inoculate 1 percent of its population, and Covax will need a lot more money and help.

While conquering the virus is the obvious and primary reason for the United States to pitch in, there is also this: It is very much in America’s national interest not to cede a critical “soft power” advantage to autocratic rivals like Russia or China.

Poor countries will remember who came to their assistance, and when. Moscow and Beijing saw an opportunity early on, sending masks and protective gear to hard-hit countries last spring. Now, with low- and middle-income countries clamoring for vaccines, countries from Serbia and Algeria to Brazil and Egypt are getting doses from China and Russia. Serbia, in fact, is ahead of most countries in the European Union in the percentage of its population that has been vaccinated, in part because it’s one of the few countries where both Russian and Chinese vaccines are already available.

China has made sharing its homegrown vaccines a centerpiece of its “Belt and Road Initiative,” a global strategy to invest in more than 70 countries and international organizations. Beijing’s vaccine diplomacy has had its glitches, most notably the lack of verified information about the efficacy of its vaccines, but for many poor countries, China’s vaccines are far better than nothing. Recently, for example, China announced it would donate 300,000 doses to Egypt.

Russia claims it has orders for its Sputnik V vaccine from about 20 countries — including America’s southern neighbor, Mexico, which has contracted to receive 7.4 million doses between February and April. After a bout of Covid-19 in late January, President Andrés Manuel López Obrador of Mexico reported that he had received a warm phone call from President Vladimir Putin of Russia and that he had invited Mr. Putin to visit Mexico. At about the same time, the president and vice president of Argentina, Alberto Fernández and Cristina Fernández de Kirchner, both received their first jabs of Sputnik V.

India, among the world’s largest producers of generic medicines, has also moved to develop its own vaccines and to ship them abroad, in part as a counter to China’s outreach. Though India has a population of more than 1.3 billion, it has already sent 3.2 million free doses to neighboring countries and has contracted with a host of governments around the world to supply vaccines. One reason India can do this is that it’s producing more vaccines than it can currently distribute domestically. The U.A.E., which is vaccinating its residents faster than any country except Israel, has also begun donating Chinese-made Sinopharm to countries where it has strategic or commercial interests.

Vaccine diplomacy has drawbacks. Dr. Ghebreyesus of the W.H.O. has complained that too many countries and vaccine manufacturers are focused on making bilateral or selective deals, which pushes the poorest countries to the side. That is the advantage of the W.H.O.’s Covax initiative, and the Biden administration has made a good start in supporting it.

President Biden has assured Americans that most will be vaccinated by the end of summer. He should also assure them that it is very much in their interest, for reasons of morality, common sense and national interest, to be at the forefront of the global war against that vicious little spiked blob.