Home » Opinion | The Presumption of Freedom

Opinion | The Presumption of Freedom

Few see Judge Merrick Garland, President Biden’s pick for attorney general, as a progressive who will reform the criminal legal system. But the Biden administration recently acknowledged that mass incarceration does not make us safer. And as the nation’s chief federal prosecutor, if confirmed, Judge Garland will have the power to prioritize federal bail reform and reduce sky-high rates of pretrial jailing. Doing so will decrease mass incarceration, advance racial justice and enable Mr. Garland to stake his claim as a progressive prosecutor. In fact, federal bail reform is an area where he may have already shown an appetite for change.

In November, voters across the nation overwhelmingly chose reform-oriented progressive prosecutors over “law and order” challengers. Red and blue districts elected prosecutors who ran on a promise to use their office to enact change. Some of these prosecutors promised to stop pursuing low-level drug crimes. And at least one has since ended the use of cash bail for certain crimes. But while the progressive-prosecutor movement has gained momentum at the state and county levels, it hasn’t gotten any traction in the federal system.

Mr. Garland will be able to change this by disrupting the culture of detention that pervades the ranks of federal prosecutors and, to some degree, the federal judiciary. During his time as chief judge of the U.S. Court of Appeals for the District of Columbia Circuit, Mr. Garland was a member of the Judicial Conference of the United States, the main policymaking organization for the federal bench. Since 2017, the Judicial Conference has repeatedly called on Congress to reform the federal bail law by eliminating what is known as the “presumption of detention” for many drug cases.

While the Supreme Court famously said that freedom should be the default for people awaiting trial, current law directs judges to assume that people charged with certain crimes — including most drug crimes — will flee and endanger the community if released. That exception has now swallowed the rule, becoming a built-in bias for incarceration that feeds the federal system’s colossal detention rates and stark racial disparities.

Nearly 40 years ago, Congress created the presumption of detention to lock up only the “worst of the worst” offenders before trial, but in practice it deprives nearly every person awaiting trial in a federal drug case of their liberty. The presumption of detention “has become an almost de facto detention order” for 93 percent of all federal drug cases, expanding far beyond its original purpose. It also creates racial disparities, as Black and Latino individuals are jailed in drug cases at a higher rate than white individuals. When it first went into effect, fewer than one in four people were jailed pending trial. Now, with the presumption as a driving force, federal pretrial detention rates have skyrocketed, with three in four people jailed before trial — a 75 percent detention rate that falls disproportionately on people of color. This is mass incarceration in action.

Federal prosecutors have long contributed to these deprivations of liberty. Prosecutors’ detention request rates rose to 77 percent in 2019 from 56 percent in 1997. Prosecutors ask judges to cage a large majority of people facing federal charges, despite the fact that government statistics establish that 99 percent of people released pretrial return to court and 98 percent do not reoffend on release. Yet even during the pandemic, federal prosecutors fought to jail protesters in the wake of George Floyd’s killing.

Congress recognizes the need for federal bail reform. The heads of the Senate and House judiciary committees, respectively, have introduced bills that would eliminate the presumption of detention and reduce high federal pretrial detention rates. While only an act of Congress can change the broken bail law in a lasting way, there is no reason for Mr. Garland to sit back and wait for Congress to take action. 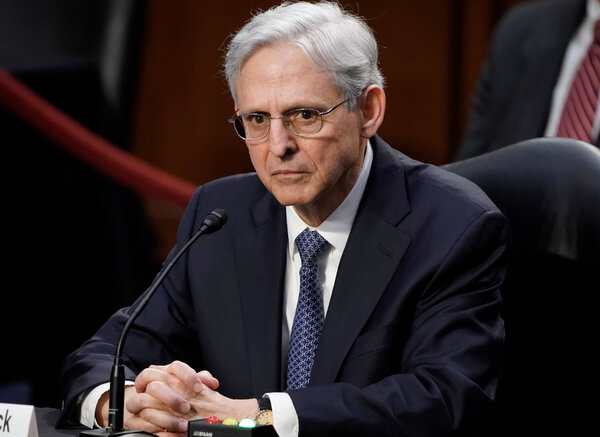 Mr. Garland can act on Day 1 by directing his federal prosecutors to use their considerable power to limit jailing to those federal cases where it is truly necessary. He can institute changes to the Department of Justice’s pretrial detention policy that mirror the recommendations made by the Judicial Conference.

It’s as simple as directing his prosecutors to stop relying on the presumption of detention. Instead, Mr. Garland can instruct his prosecutors to request pretrial jailing only when objective indicators demonstrate that there is a high risk that the person will fail to return to court or poses a genuine danger. He can also direct his prosecutors to stop asking judges to impose financial conditions of release that let affluent people buy their freedom while requiring poor people to rely on bail bonds. After all, the federal bail law was supposed to ensure that the “scales of justice” are not “weighted with money.” By freeing low-level drug offenders from the presumption’s unforgiving grip and alleviating wealth-driven disparities, Mr. Garland can bring prosecutorial practices back in line with the spirit of the law.

Even before the Covid-19 pandemic, pretrial detention pressured people to plead guilty with adverse terms, leading to higher sentences when compared with those released pending trial. Pretrial jailing can cost people their homes, their jobs, even their children, all without a guilty verdict. And during the pandemic, short sentences and brief periods of pretrial detention can transform into death sentences. Accordingly, prosecutors must request detention in fewer cases.

As Judge James Carr of the U.S. District Court for the Northern District of Ohio has observed, “Mass detention creates mass incarceration.” Instead of maintaining a default position that most people awaiting trial should be jailed, Mr. Garland should enact policy changes that limit pretrial jailing to cases where it is genuinely necessary, eliminate all financial considerations from the detention calculus and aim to reduce racial disparities in pretrial detention.

These common-sense changes would mark the true beginning of a progressive-prosecutor movement at the federal level. Prosecutors fostered the culture of detention. Now they must help dismantle it.