When the main campus of the Central University of Venezuela (Universidad Central de Venezuela, or UCV) was declared a World Heritage Site in 2000, UNESCO deemed it “a masterpiece of modern city planning, architecture and art” and an “outstanding example of the coherent realization of the urban, architectural and artistic ideals of the early 20th century.”

Two decades later, this paradigm of art — an emblem of Caracas and the pride of Venezuela’s public education system — is in ruins, and its demise may go unnoticed in a country that’s suffered so much loss.

Last year, a section of the roof covering the walkway connecting the university’s vast faculties collapsed because of a lack of maintenance. In the absence of resources to tend to the drainage, the columns holding up the roof fractured under the weight of storm water pooled on the structure’s corrugated surface. And that’s just the most glaring example of UCV’s deterioration. On June 30 the building that houses the school of political science caught fire. The university’s fire department and local firefighters struggled to extinguish the flames because of the water shortage.

It’s as if the honor bestowed by UNESCO were a condemnation and not a designation of excellence. Yet the university is far from the country’s only struggling institution. A 2018 report found that 95 percent of educational establishments have fallen into disrepair. Classrooms are emptying out, with dropout rates in secondary schools reaching 50 percent in 2020 largely because of the exodus of more than five million Venezuelans and the impact of the pandemic. The country is estimated to have lost about half of its teachers since 2015, and many children stay home instead of going to class because schools lack the basic infrastructure and resources to provide them with food.

The degradation of our educational system is a quieter, more gradual tragedy that weighs on the soul. But its implications — the decline of one of the most important cultural and intellectual symbols in Venezuela and the potential loss of a modern architectural landmark — should be disconcerting to all of humanity. If civilization can celebrate its greatest creations, it also has a duty to protect them. UNESCO should draw attention to the demise of University City (Ciudad Universitaria), UCV’s central campus, beyond general statements of support and declare the site a World Heritage in danger. But the Venezuelan government must do its part: UNESCO will provide the financial resources necessary for conservation efforts only if Venezuela requests them. 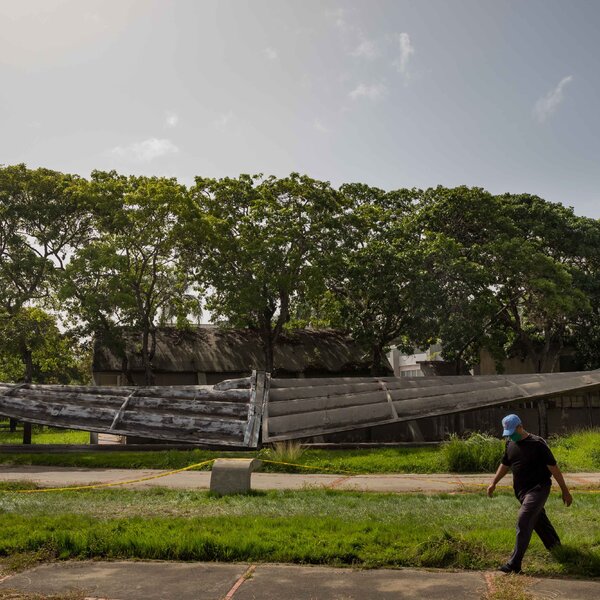 As a child born in the middle of the 20th century, I saw UCV as the vibrant epicenter of Venezuela’s higher education. After the dictatorship of Juan Vicente Gómez, which ended in 1935, education was considered essential to creating a fruitful democracy. I took it for granted amid the dizzying modernization brought on by the oil boom.

When I began studying architecture at the university in 1968, it felt like UCV had always existed and would be eternal. I didn’t understand its exceptionality.

The reality is that UCV is a modern marvel as unique as it is fragile and that its disintegration is not by chance. The university is the victim of a regime whose notion of continuity is keeping cultural symbols, especially institutions it feels threatened by, buried under absolute neglect.

The Central University of Venezuela has always been a bastion against authoritarianism and the vanguard of new ideas. The politics of Hugo Chávez, who came to power in 1999, and his followers were generally unpopular among the UCV student body. Students took to the street in 2007 to protest President Chávez’s moves to restrict freedom of expression. As part of his long-term strategy to weaken their influence, he denied the university and (other public institutions) essential financial resources.

Continued budget restrictions and the suppression of outspoken teachers and students under President Nicolás Maduro’s administration have helped make the inconceivable happen: University City has become an archaeological ruin. The state of the site is a mirror of the country’s conditions, revealing that time in Venezuela seems to march backward. There’s a sensation that the current of history, confoundingly and devastatingly, flows in reverse. Our future seems to exist only within the constructs of a fading past.

University City was built between 1940 and 1960 using oil revenues — at a time when Venezuela was a modernizing but rural country. It was conceived and designed by the influential Venezuelan architect Carlos Raúl Villanueva, whose world-renowned projects inspired generations of Venezuelans.

Developing the UCV project offered surprises even for Mr. Villanueva. He started by organizing architectural elements along a classical axis that would integrate education and urban life, typical of his training at the École des Beaux-Arts in Paris, but then his vision took a profound turn. To his original idea, he added another dimension: public art in the form of sculptures, murals, mosaics and stained-glass windows. His aim was to show art not as it’s exhibited in a museum, but as an active protagonist.

The works became part of the paths people found toward new perspectives of space as they traversed the university’s ramps, awnings, archways and courtyards that extend from the Plaza Cubierta (a shaded outdoor area) to the Aula Magna (an indoor concert hall full of light and color), where the sculptor Alexander Calder shaped the hall’s acoustic screens like clouds.

The Aula Magna, the epicenter of UCV, connects to the rest of University City through interwoven corridors whose sensual curves create spatial experiences as they shade and protect pedestrians.

But it’s easy given UCV’s deteriorated state to envision a dystopian future in which the school is one day fully abandoned and stripped clean of its artworks, with Mr. Calder’s clouds being sold off individually. It wouldn’t be as easy to take the murals of Victor Vasarely and Alejandro Otero, but I fear for Fernand Léger’s stained-glass giant window in the library.

UCV is not alone in the face of such threats. Venezuela’s other public and private universities are also fighting decay. The Universidad de Oriente has suffered constant decline, from the usual budget slashes and acts of vandalism.

I count many friends among the students and professors at the Central University of Venezuela’s School of Architecture. I admire their attempts to keep it alive. While the university has started repairing the collapsed roof, I fear that it won’t be enough.

UCV’s future is uncertain. If in the year 2000, the UNESCO designation was a source of pride and celebration, 21 years later it must serve as a survival guide. UNESCO cannot limit itself to assessing the works of the past. Its main task should be to integrate them into present life and culture.

Federico Vegas is a Venezuelan architect and writer. His most recent book is the novel “Los años sin juicio.” This essay was translated from the Spanish by Erin Goodman.