Workers around the country are walking off the job to protest a lack of protective equipment, safety measures, even soap. 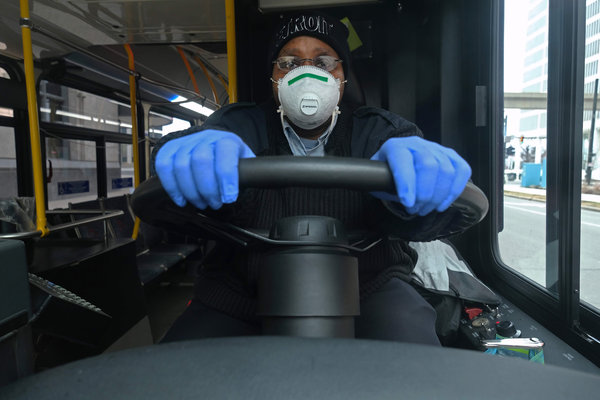 Millions of white-collar workers are telecommuting from home to stay safe as the coronavirus extends its terrifying reach across America. But millions of other workers — supermarket cashiers, pharmacists, warehouse workers, bus drivers, meatpacking workers — still have to report to work each day, and many are furious that their employers are not doing enough to protect them against the pandemic.

Some companies are not providing their workers with gloves or hand sanitizer, and some are even prohibiting employees from wearing masks for fear of frightening customers. Many workers feel they’re putting their lives on the line each day by interacting with customers who might be infected and by working in places they’re convinced have not been adequately sanitized against the virus.

Fearing retaliation, American workers are generally far more reluctant to stick their necks out and protest working conditions than are workers in other industrial countries. But with greater fear of the disease than of their bosses, workers have set off a burst of walkouts, sickouts and wildcat strikes.

With their employer’s business booming, workers at Instacart, the grocery delivery service, have called for a strike on Monday, demanding that the company provide hazard pay and more personal protective supplies. Workers at an Amazon warehouse on Staten Island threatened a walkout on Monday if the company did not close the building and thoroughly clean it after several workers tested positive.

Last Tuesday, after a mechanic tested positive for the coronavirus, more than half the workers at Bath Iron Works, the famous shipyard in Maine, stayed home from work to pressure their employer to thoroughly clean the shipyard. Workers walked out at a Fiat Chrysler truck plant in Warren, Mich., because there was no hot water for washing up. Bus drivers in Birmingham, Ala., went on strike because they felt not enough was being done to protect them from contracting Covid-19 from infected passengers, while bus drivers in Detroit staged a sudden sickout for the same reason. Sanitation workers in Pittsburgh engaged in a work stoppage over their coronavirus worries.

“We want better equipment, protective gear; we have no masks,” one of the sanitation workers told the television station WPXI. “We want hazard pay. Hazard pay is very important.”

At a Kroger warehouse in Memphis, 200 workers walked out after learning that a co-worker had the virus.

“The ones that is here, they so tense they scared to touch the equipment,” said Maurice Wiggins, a Kroger forklift driver and father of two. (He also complained about being forced to work a 97-hour, seven-day workweek.)

These workers are demanding what everyone else wants during the worst epidemic in a century — safety. They feel their companies are taking them and their safety for granted, and they don’t want to risk their lives for a paycheck, often a meager one. Many workers are angry that, while their employers are doing a lively business, they haven’t given them raises or hazard pay, which some other companies have provided.

“We’re not getting nothing — no type of compensation, no nothing, not even no cleanliness, no extra pay,” said Kendaliyn Granville, who led a strike by 50 workers at a Perdue poultry processing plant in Kathleen, Ga. “We’re up here risking our life for chicken.”

Some of the strikers have said they resent risking their lives while chief executives earn millions and their companies’ more highly paid white-collar employees are working safely at home.

Cooks and cashiers who walked out at a McDonald’s restaurant in San Jose, Calif., said they didn’t even have enough soap to clean their hands, and were not provided with gloves, masks or hand sanitizers.

“They’re not providing us with the simple necessities to combat the virus that is right in front of us,” said Ana Martinez, a cook and drive-through worker at the San Jose McDonald’s. “We feel underappreciated and undervalued, so my co-workers and I decided to take this step to fight back.”

The anger behind these work actions is fed by the disregard and disrespect too many American employers show their workers by failing to provide fundamental protections that are universal in other industrial nations.

The United States is the only wealthy nation that doesn’t have a national law guaranteeing workers paid parental leave and paid vacations. And until the recent passage of an emergency coronavirus law, it was one of the very few industrial nations not guaranteeing workers paid sick leave. The new law gives many American workers two weeks of paid leave if they need to take off work because of the virus, but in a stinging slap at workers, corporate America demanded, and won, an exemption for companies with more than 500 employees.

Earlier this month, 20 workers walked out at a McDonald’s in Cicero, Ill., out of frustration that their restaurant’s management was balking at giving them the paid sick days due to them under Illinois Law.

Adriana Alvarez, a worker there, said some employees were going to work sick because they couldn’t afford to go unpaid. The 30-minute walkout jolted management into agreeing to smooth the way for workers to obtain paid sick leave, Ms. Alvarez said.

Alexander Colvin, dean of the Cornell University School of Industrial and Labor Relations, told me that the eruption of strikes “is a function of the American system where we get so much variation from employer to employer”

“We see some employers doing the right thing, standing by their employees during this crisis,” he said, “and others not doing much at all.”

As often happens when workers finally flex their collective muscles, their actions have gotten results. In Birmingham, the transportation authority limited the number of passengers allowed on a bus to 19, blocked off front seats, and had passengers enter and exit only by the rear entrance.

Perdue said it had stepped up its sanitation efforts. Those efforts included a more thorough cleaning of common areas, the cafeteria and locker rooms at the Georgia poultry plant. At the McDonald’s in San Jose, Ms. Martinez said, restaurant management provided more gloves and soap, but not masks or hand sanitizer.

With the pandemic extending its reach, there certainly will be more walkouts. As consumers begin to have a hard time buying what they need, they should realize how many people are risking so much to keep them fed and safe, and they can demand that business and government do more to protect these essential workers.

“We are high-risk ticking time bombs for being exposed to someone with it,” Scott Ryan, a 41-year-old bus driver from Everett, Wash., told co-workers in a Feb. 28 Facebook post. On Friday, Mr. Ryan, a father of three, died of Covid-19.

Steven Greenhouse (@greenhousenyt), who was the labor and workplace reporter for The New York Times for 19 years, is the author of “Beaten Down, Worked Up: The Past, Present, and Future of American Labor.”