Good morning. Election Day is a week away. There’s new evidence of water on the moon. And Amy Coney Barrett is a Supreme Court justice. 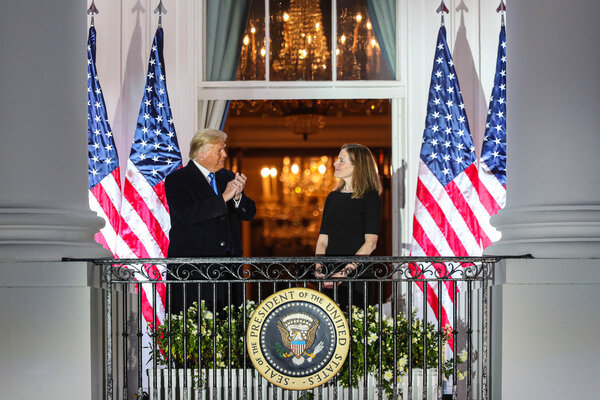 Over the past 32 years — a period that includes the naming of every current Supreme Court Justice — Democrats and Republicans have each held the White House for four terms. In six of those eight elections, the Democratic candidate won the popular vote.

Those two facts offer a pretty good summary of the country’s political makeup. It is split fairly evenly between Democratic and Republican voters, with a modest lean toward Democrats.

The Supreme Court, however, now has a very different makeup.

With the confirmation last night of Amy Coney Barrett, Republican-appointed justices hold a 6-to-3 majority and will probably control the court for years to come. The current six-member majority also happens to be sharply conservative and often quite aggressive, willing to substitute its own judgment for that of Congress, the president or state governments — on voting rights, campaign finance, health care, consumer protection, workplace law and more.

How did the Supreme Court end up so disconnected from a generation of election results? Circumstance — when justices happen to have died — plays a role. But so does the unprecedented 2016 move by Mitch McConnell, the Senate Republican leader, to refuse to let Barack Obama fill a vacancy.

And so does the insistence by Ruth Bader Ginsburg to stay on the court in 2010, when she was in her late 70s and fighting cancer, rather than allowing a president who shared her political views to replace her. Instead, Barrett, who has many opposite views, now holds Ginsburg’s seat.

I know that different people will put different weight on these factors, with many willing to defend either McConnell’s or Ginsburg’s decisions. But regardless of how we got here, the country has arrived at a tricky place.

The Supreme Court has asserted itself in recent years as arguably the country’s single most powerful institution, handing down the last word on many of the most hotly debated issues. At the same time, the court has developed a strong outlook that most Americans do not share. That outlook is the result less of any election outcomes than of circumstance and political tactics.

It’s a combination that has the potential to cause widespread voter frustration and ultimately a constitutional showdown. “In America today,” the political scientists Steven Levitsky and Daniel Ziblatt, recently wrote in The Times, “the majority does not govern.” They added, “This is minority rule.”

Chief Justice John Roberts, one of the court’s six Republican appointees, seems worried about how this situation could threaten the court’s legitimacy. That helps explain why Roberts has voted against his own apparent views in some (but not all) high-profile recent cases.

Of course, Barrett’s confirmation means that Roberts is no longer the swing justice. There is a conservative majority even without Roberts. How daring will it be?

What’s next: Barrett could begin work at the court as soon as today. Among the first issues she may face, according to The Times’s Adam Liptak, are cases from North Carolina, and Pennsylvania, concerning deadlines for mail-in ballots.

Election Day is one week away: The Postal Service recommends mailing your ballot today to ensure it arrives by Election Day.

The Supreme Court refused to extend Wisconsin’s deadline for receiving absentee ballots to after 8 p.m. on Election Day. The ruling broke down on partisan lines: It was a win for the Wisconsin Republican Party, and all five Republican-appointed justices were in the majority.

Joe Biden will campaign in Iowa and Wisconsin on Friday, visiting states Obama won twice and President Trump flipped in 2016. Polls show a neck-and-neck race in Iowa, while Biden leads in Wisconsin.

Daily polling diary: Trump leads in Texas — by four percentage points — despite a collapse of support from suburban white voters, according to a new Times/Siena College poll. Crucially, Trump has not lost ground among Hispanic voters.

As the pandemic reduces enrollment and state funding, colleges and universities are cutting their budgets, furloughing employees and eliminating majors.

El Paso ordered a 10 p.m. curfew to stem a virus surge as its hospitals overflow.

Counties in Kansas with mask requirements have seen about half as many new infections as counties without mandates.

A hand-built wooden classroom in Wisconsin, a botanical garden in Arkansas and tree stumps and sailcloth on Cape Cod: These photos look at U.S. schools that have moved students outdoors.

Protests and violent clashes broke out in Philadelphia after the police fatally shot Walter Wallace Jr., a 27-year-old Black man who they said was armed with a knife.

Hurricane Zeta made landfall in Mexico’s Yucatán Peninsula. The storm is on its way to the coastal Gulf States of the U.S.

New wildfires in Southern California burned thousands of acres over a matter of hours, forcing more than 90,000 people to evacuate.

Ant Group, a Chinese financial tech firm, is set to make one of the largest initial public stock offerings in history. The company’s mobile payment service, Alipay, has more than 730 million monthly users.

Citizens and businesses in Kuwait and Qatar have begun boycotting French goods in protest of comments made by President Emmanuel Macron about Islam. Macron’s comments came after the beheading of a French high school teacher who showed caricatures of the Prophet Muhammad in class.

Japan’s new prime minister says the country will aim to be carbon neutral by 2050. China and the European Union have already promised to bring their net carbon emissions down to zero.

A Morning read: Scientists found new evidence of water and ice on the moon’s surface, a potential resource for future astronauts. “Anytime we don’t need to pack water for our trip, we have an opportunity to take other useful items with us,” one NASA scientist said.

The Times can help you navigate the election — to separate fact from fiction, make sense of the polls and be sure your ballot counts. To support our efforts, please consider subscribing today.

Across American history, only 10 Black people have served as U.S. senators — and never more than three at once, the current total. This year, though, there are seven major-party Black nominees trying to win Senate races for the first time. Five are Democrats, and two are Republicans.

This burst has created the potential for the most racially diverse Senate ever, but it doesn’t guarantee that outcome. While a few of the seven Black nominees are in close races, none has a clear lead.

A Times story looks at how Black candidates are running their campaigns in several Southern states.

In the mood for something over-the-top? Dotted with caramelized onions and crisp Gruyère toasts, this French onion macaroni and cheese is the answer.

The future of online shopping

Live shopping — a practice in which social-media influencers livestream themselves hawking goods like cosmetics, clothing and snacks — has become quite popular in China. When Kim Kardashian West appeared on the Chinese influencer Viya’s livestream to promote her line last year, she reportedly sold 150,000 bottles of perfume in seconds.

Now, The Verge reports, tech companies are trying to make live shopping big in the U.S.: Amazon, Instagram and Facebook all launched features this summer. “It’s basically like you’re shopping with a friend or somebody that you really aspire to be like,” one expert said.

The writer Bryan Washington describes his new book “Memorial” as a gay slacker dramedy, among other things. It revolves around a young couple: Mike, a Japanese-American man, and Benson, his Black boyfriend. After Mike goes to Japan to take care of his terminally ill father, Benson stays behind in Houston with Mike’s visiting mother. The studio A24 has already bought the television rights for the book.

“In plain, confident prose, Washington deftly records the way the forces of loyalty pull the heartstrings in different directions,” Ryu Spaeth writes in a review.

Visit a snow festival in the Peruvian Andes that marks the start of the harvest season.

The pangrams from yesterday’s Spelling Bee were carotid and dictator. Today’s puzzle is above — or you can play online if you have a Games subscription.

A clarification: Yesterday’s newsletter said that Trump had not released an agenda for his second term. He has released a list of items he calls an agenda — such as “Create 10 Million New Jobs in 10 Months”— without descriptions of how he would accomplish them.

P.S. The Times is opening a bureau in Nashville. The founding bureau chief will be Rick Rojas, currently a correspondent in Atlanta.

Today’s episode of “The Daily” is about the shadow of the 2000 election. On the latest “Sway,” Kara Swisher talks to Hillary Clinton.

Lalena Fisher, Claire Moses, Ian Prasad Philbrick and Sanam Yar contributed to The Morning. You can reach the team at [email protected].