The Success of Top-Down Simplicity

In the early weeks of Covid-19 vaccinations, the shining examples of success were all places with politically conservative leaders. Globally, the countries with the largest share of vaccinated people were Britain, Israel and the United Arab Emirates. In the U.S., the states that got off to the fastest starts were Alaska and West Virginia.

This pattern made me wonder whether many progressive-led governments were spending so much effort designing fair-seeming processes that they were failing at the most basic goal of a mass vaccination program: getting shots into arms. That error has held down vaccination rates across much of continental Europe. And it appeared to be an early problem in California and New York.

“The parts of the U.S. that are excelling and those that are struggling with vaccinations are starting to look like the nation’s political map: deeply divided between red and blue states,” Russ Bynum of The Associated Press wrote this week. 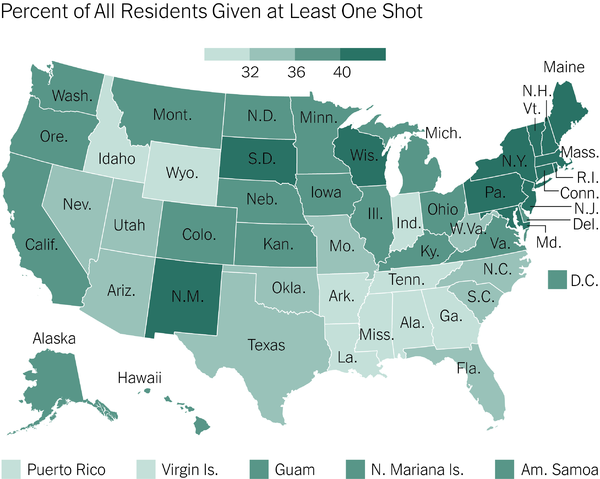 Why? There seem to be two main reasons.

1. The party of government

In the most successful state programs, one theme is what you might call centralized simplicity. In Connecticut, Gov. Ned Lamont gave priority to older residents, including people in their 50s, rather than creating an intricate list of medical conditions and job categories that qualified people for shots (and that more privileged families often figure out how to game).

In New Mexico — which has the country’s highest rate of fully vaccinated people, despite also having a high poverty rate — Gov. Michelle Lujan Grisham has overseen the creation of a centralized sign-up system. The state has one vaccine portal that all residents can use to sign up for shots, rather than the piecemeal, confusing systems in many other states, my colleague Simon Romero reports from Albuquerque.

South Dakota, the red state with the highest share of vaccinated residents, has also taken a centralized approach, NPR’s Ailsa Chang points out.

Vaccine hesitancy has declined substantially, polls show. But it is still notably high among registered Republicans.

Hesitancy is also somewhat higher among Black Americans than white or Hispanic Americans — and the south has a large Black population. “Most of the states where vaccination rates are lowest happen to be ones where the Black population is high and where the percentage who graduated from college was low,” CNN’s Harry Enten writes, “while the reverse is true in the states with high vaccination rates.”

Dr. Vernon Rayford, an internal medicine doctor in Tupelo, Miss., told The Times that he had noticed a difference in the sources of skepticism. White skeptics often express a general distrust of government. Black skeptics are particularly mistrustful of the medical system, which has a long history of giving them substandard care — and even outright harmful treatments.

Across much of Mississippi — the state with the smallest share of residents to have received a shot — vaccine appointments are going unfilled largely because of a lack of demand. Two big reasons for the skepticism, Dr. Brian Castrucci, a public health expert, told The Times’s Andrew Jacobs, are misinformation on social media and mixed messages from Republican governors about the urgency of vaccination.

Vaccine rates still are not high enough — in any state — to have ended the pandemic. In Connecticut and New Mexico, combined, about 11 people have died on a typical recent day. But that toll has fallen more than 80 percent since mid-January, even more than in the rest of the country.

“I think we’re going to break the back of this thing,” Lamont, Connecticut’s governor, said last week.

Despite dire predictions, the number of suicides fell by 5 percent last year, although the decline appears to have been concentrated among white Americans.

If you have questions about how the Covid vaccines work against virus variants, here are some answers (and the outlook is hopeful).

A gunman killed at least eight people at a FedEx warehouse in Indianapolis last night. The police said the gunman killed himself.

The attack is the latest in a spate of mass shootings across the U.S.

The Times will have updates throughout the day. And here’s what we know.

Derek Chauvin declined to testify in his trial over the killing of George Floyd. Both sides will make closing arguments on Monday.

Secretary of State Antony Blinken visited Afghanistan to reassure its leaders that the U.S. would continue its support after withdrawing troops.

The Dallas Wings selected Charli Collier, a center from the University of Texas, as the No. 1 pick in the W.N.B.A. draft.

Can Biden be as transformative as Franklin Roosevelt?

Biden “is the first president since Lyndon Johnson who can rightly be called F.D.R.’s heir,” Jonathan Alter writes in The Times.

Roosevelt started quickly, but later events — like World War II — helped define his presidency. Much of what will define Biden’s hasn’t happened yet, Matthew Continetti argues in National Review.

Modern Love: A Pakistani Muslim woman knew falling for a Hindu Indian man would break her. And it did.

Lives Lived: Carol Prisant was a 51-year-old former antiques dealer with no journalism experience when she decided she wanted to work for the magazine The World of Interiors. She went on to an illustrious three-decade career. Prisant died at 82.

The long life of Prince Philip

Prince Philip — who died last week at 99, after 73 years as Queen Elizabeth II’s husband and royal consort — will be buried tomorrow in England. The ceremony will be limited to 30 people and will have “minimal fuss,” according to the BBC, which will televise the funeral.

Prince Philip was a decorated British World War II veteran. In the 1941 Battle of Cape Matapan off the Greek coast, Philip, then a 19-year-old midshipman, operated the searchlights to find enemy ships.

Philip and Elizabeth married in 1947, when he was 26 and she was 21. The pair — who were third cousins — had previously laid eyes on each other when he was 18 and she was 13. Philip was born into the royal families of Denmark and Greece and had royal German relatives, some of whom had supported the Nazis.

He was famous for his (often not so subtle) remarks, which people have called oblivious, insensitive or worse. “During his long life in a very public role, it’s hard to think of a group of people he did not offend,” The Washington Post wrote.

“The Crown” changed his image. The show displayed him as a vital and complex man who modernized royal life. “It helped humanize him,” a British author told The Times. “And it helps you empathize with him.”

This Swedish almond cake is a little chewy, a little crackly and very beautiful.

After finding fame in the girl group Danity Kane, Dawn Richard endured obstacles in her career. Her new album captures the energy of New Orleans.

Eight contemporary writers, including Tommy Orange and Ottessa Moshfegh, shared the books that influenced them.

Take this week’s News Quiz and compete with other Times readers.

The pangram from yesterday’s Spelling Bee was oxidizing. Here is today’s puzzle — or you can play online.

Thanks for spending part of your morning with The Times. See you Monday. — David

P.S. The Modern Love Podcast wants to hear how you’ve been dividing up housework during the pandemic. Your submission might make it into a future episode.

Today’s episode of “The Daily” is about pandemic parenting. On “Still Processing,” a conversation about celebrity apologies. And on “Sway,” CNN’s Don Lemon discusses the future of cable news.