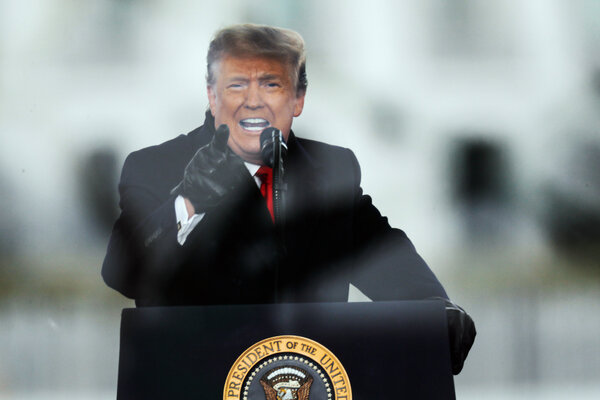 Donald Trump has long used a speaking style that seems deliberately murky. His supporters hear him delivering a clear message even when he stops short of explicitly delivering that message.

A classic example came during his first debate with Joe Biden last year, when Trump told the Proud Boys, a violent far-right group, to “stand back and stand by” — and then quickly added that “somebody’s got to do something about antifa and the left.” The Proud Boys celebrated the message as an endorsement, while Trump could claim he was not encouraging violence.

Today, the Senate will begin Trump’s second impeachment trial, and his speaking style will be at the heart of the legal arguments.

The House members prosecuting the case against Trump will say that he is responsible for the message that his supporters heard from him. Trump’s lawyers will argue that he cannot be held accountable for anything he did not say. “Notably absent from his speech,” the lawyers wrote in a pretrial filing, referring to a Jan. 6 rally near the White House shortly before many of the attendees stormed the Capitol, “was any reference to or encouragement of an insurrection, a riot, criminal action, or any acts of physical violence whatsoever.”

(They will also claim that the Senate cannot try a former officeholder, a position mostly at odds with history.)

The key dispute will be about the Jan 6. rally, where Trump spoke for more than an hour, telling repeated lies about the election and urging the crowd to “fight much harder” to prevent Biden from becoming president.

Trump praised Rudy Giuliani, his lawyer, for being tougher than many other Republicans. (A few minutes earlier, Giuliani had urged the crowd to conduct a “trial by combat” to resolve the election.) Trump went on to describe congressional Republicans who were objecting to the results as “warriors.”

“Republicans are constantly fighting like a boxer with his hands tied behind his back,” Trump said. “And we’re going to have to fight much harder.”

What is a president’s responsibility?

If you watch the rally again now, it seems clear that Trump was urging his supporters to fight in some tough, new way that they had not yet tried. That’s clearly how many of them heard him — and they violently attacked the Capitol about an hour later, threatening physical harm to members of Congress and killing a police officer.

“Videos of the crowd eliminate any doubt that President Trump’s words in fact incited the crowd to commit violence,” the House impeachment managers wrote in their legal filing. “Immediately after President Trump told the crowd that ‘you’ll never take back our country with weakness,’ and that ‘[y]ou have to show strength,’ supporters can be heard loudly shouting ‘take the Capitol right now!’ and ‘invade the Capitol building!’”

Still, Trump did not tell them to attack the Capitol. He was ambiguous about what exactly they should do. One moment, he said, “You’ll never take back our country with weakness.” The next, he said, “I know that everyone here will soon be marching over to the Capitol building to peacefully and patriotically make your voices heard.”

Once the attack was underway, he continued to use the same indirect style of communication. At 2:24 p.m., when television networks were showing rioters in the Capitol, Trump sent out a tweet in which he said nothing — positively or negatively — about the violence but continued stoking the crowd’s anger. “Mike Pence didn’t have the courage to do what should have been done to protect our Country and our Constitution, giving States a chance to certify a corrected set of facts, not the fraudulent or inaccurate ones which they were asked to previously certify,” Trump wrote. “USA demands the truth!”

When a president’s supporters are attacking the Capitol — and believe they are carrying out his wishes — should he discourage them? Or has he defended the Constitution merely by not issuing an explicit call for violence? That’s the issue before the Senate.

Debate will start around noon today. Here’s what to watch for.

Senators will vote again today on whether it is constitutional to try a former president. Some of the 45 Republicans who voted no last month have said they are open to debating the question.

Representative Ron Wright of Texas died at 67. He tested positive for the coronavirus last month.

New York City is planning to reopen its middle schools this month, and restaurants can resume indoor dining on Friday.

Facebook said it would remove posts with falsehoods about vaccines.

House Democrats introduced legislation that would send up to $3,600 per child to millions of families, advancing a key part of President Biden’s virus relief package.

John Fetterman, the populist Democratic lieutenant governor of Pennsylvania, said he was running for the Senate in 2022 to succeed Pat Toomey, who is retiring. Several other high-profile politicians in the state, Republican and Democratic, are also weighing runs.

Senator Richard Shelby of Alabama, 86, said he would not seek a seventh term. He is the fourth Senate Republican to say he will not run next year.

A Times investigation looks at how prominent members of the G.O.P. formed bonds with militias.

Paul Manafort, chairman of the 2016 Trump campaign, cannot be prosecuted in New York for mortgage fraud and other felonies, a court ruled, because the charges are too similar to those for which Trump pardoned him.

Hackers tried to poison the drinking water in a Florida city by changing the chemical levels. Cybersecurity experts have long warned of attacks on small municipal systems.

An organization that operates homeless shelters in New York City fired Victor Rivera, its chief executive, and Bronx prosecutors opened a criminal inquiry into him. A Times investigation found that Rivera had sexually abused women.

More buzz for the social news platform Reddit: The company said it had raised $250 million in funding. And people are talking about its five-second Super Bowl ad.

Mushrooms are magic: Fungi are a kingdom of life all their own, closer to growing animals than plants, but not quite either. Read all about them.

From Opinion: Tennessee executed Sedley Alley in 2006 for a decades-old murder. Now his daughter thinks DNA testing will clear his name, The Times’s Emily Bazelon explains.

Lives Lived: Mary Wilson was a founding member of the Supremes, the trailblazing group from the 1960s known for hits like “Where Did Our Love Go?” and “Baby Love.” With Florence Ballard and Diana Ross she helped develop Motown’s legendary sound. Wilson died at 76.

Joe Allen parlayed a modest pub on the edge of the theater district into an empire that included two successful New York restaurants and stretched as far as Paris. Allen died at 87.

You should try a ‘Shultz hour’

When George Shultz — who died Saturday at 100 — was secretary of state under Ronald Reagan in the 1980s, he developed a weekly ritual. He closed the door to his office and sat down with a pen and a pad of paper. For the next hour, Shultz tried to clear his mind and think about big ideas, rather than the minutiae of government work.

Only two people could interrupt him, he told his secretary: “My wife or the president.”

Shultz told me that story when I interviewed him a few years ago, and it has stuck with me, because it’s even more useful advice today than it was four decades ago. These days, we are constantly interrupted by minutiae, via alerts and text messages. They can make it impossible to carve out time to think through difficult problems in new ways or come up with creative ideas.

Letting your mind wander, Sandi Mann, a British psychologist, has said, “makes us more creative, better at problem-solving, better at coming up with creative ideas.” The Dutch have a word for this concept: niksen, or the art of doing nothing. (And here’s a GQ interview in which the journalist Manoush Zomorodi argues that boredom could open the mind to creativity, problem-solving and more ambitious life goals.)

Shultz’s biggest accomplishment in government was precisely such a fresh idea: a recognition — which most other Reagan advisers lacked — that Mikhail Gorbachev was serious about reforming the Soviet Union.

As Amos Tversky, a pathbreaking psychologist, said, “You waste years by not being able to waste hours.”

This veggie-filled fried rice is a great way to use up fridge leftovers.

Afrofuturism, which melds African culture and science fiction, is booming in graphic novels and comic books. Here are some upcoming titles.

Kevin Garnett isn’t sure his generation could play in today’s N.B.A.: David Marchese’s Talk column is a conversation with the Hall of Famer.

The pangram from yesterday’s Spelling Bee was thoughtful. Here is today’s puzzle — or you can play online.

Here’s today’s Mini Crossword, and a clue: Dave of the Foo Fighters and Nirvana (five letters).

P.S. A hidden haiku from The Times’s Super Bowl coverage: “There was a time when / Tom Brady did not play in / and win Super Bowls.”

Today’s episode of “The Daily” is about Trump’s impeachment trial. On “The Ezra Klein Show,” Elizabeth Kolbert discusses climate change.

Claire Moses, Ian Prasad Philbrick, Tom Wright-Piersanti and Sanam Yar contributed to The Morning. You can reach the team at [email protected].