Good morning. Mike Pence and Kamala Harris meet in the campaign’s only vice-presidential debate. We break it down. 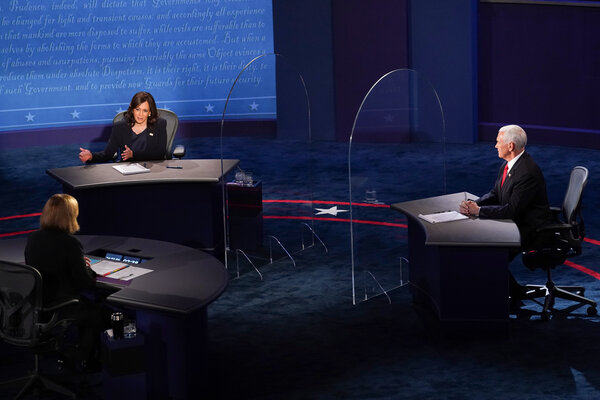 Mike Pence and Kamala Harris are both skilled debaters. And their debate last night was far easier to watch than last week’s presidential debate.

But there was also a problem with the vice-presidential debate: Pence repeatedly made statements that were either misleading or untrue.

Rather than laying out his honest disagreements with Harris and Joe Biden — be they on tax policy, abortion, policing, immigration, the environment, or any number of other issues — Pence misrepresented the Trump administration’s record and Biden’s.

To be clear, both Pence and Harris also engaged in mild overstatement and rhetorical flourishes at times. That’s normal in politics. Harris, for example, exaggerated the job losses that President Trump’s trade war with China has caused. But Pence was far more dishonest. At several points, he seemed to want to run on a record that didn’t exist.

“On day one, Joe Biden is going to raise your taxes,” Pence said. This is false: Biden has proposed tax increases only on households making more than $400,000 a year.

Pence said he and Trump had a plan to “protect pre-existing conditions for every American.” The administration has repeatedly attempted to take health insurance away from Americans, and the number of uninsured people has risen during Trump’s presidency.

Pence claimed that Trump had “suspended all travel from China.” He did not. Although Trump claimed to have done so, hundreds of thousands of people traveled from China to the U.S. after the coronavirus appeared.

Pence said Trump revered members of the military. In 2015, Trump publicly mocked John McCain because he had been a prisoner during the Vietnam War. More recently, Trump has described Americans soldiers killed in war as “losers” and “suckers,” The Atlantic has reported.

Pence said voting by mail created “a massive opportunity for voter fraud.” This contradicts all of the available evidence and history about mail voting.

Pence said he and Trump have “always” told the American people the truth.

The most disappointing aspect of Pence’s performance is that he has deep disagreements with Harris and Biden that don’t depend on distortions. It’s entirely possible to make a fact-based case against higher taxes on the rich; or widely available abortions; or high levels of immigration; or new restrictions on police.

But that is not what Pence did.

A strong moment for each candidate: Harris’s opening remarks, taking the administration to task for the terrible toll of the coronavirus on the U.S.; Pence’s celebrating the Trump administration’s turn to a more hawkish approach to China, which has since become a bipartisan consensus.

Speaking time: Despite the vice president’s repeated interruptions, the two debaters spoke for nearly identical amounts of time over all: almost 36 minutes and 30 seconds.

Questions unanswered: Harris refused to answer Pence’s direct question about whether Democrats would expand the number of justices on the Supreme Court. Pence didn’t answer when the moderator asked him why America’s pandemic death toll is disproportionate to its population and what he would do if Trump refused to accept the election results.

An uninvited guest: A fly that landed on Pence’s head for more than two minutes became a star on social media.

Times coverage: We have much more, including the main news story; a full fact check; a five-minute video summary; a list of key takeaways; and analysis from Times Opinion writers.

In a video from outside the White House, Trump called his coronavirus infection “a blessing from God” and took credit for the decision to treat himself with an experimental antibody therapy. He pledged to provide the drug to Americans free of charge, without offering any details. Hours later, the drug’s maker, Regeneron, said it had applied for emergency F.D.A. approval.

Dr. Sean Conley, the White House physician, said Trump was symptom-free and feeling “great.” Conley offered few details about the president’s treatment, including whether he was still taking a steroid meant to treat severe Covid-19 cases.

Many Notre Dame students and faculty members are furious at the university’s president, the Rev. John Jenkins, after he attended a White House event without a mask and then tested positive. The student newspaper called his behavior an “embarrassment.”

Officials in Boston are delaying their plan to reopen public school classrooms after the city’s rate of positive test results has climbed.

The Justice Department has freed federal prosecutors to investigate suspicions of election fraud during this year’s campaign, reversing a decades-long policy meant to avoid the politicization of investigations.

The Trump campaign is exploring holding an event with the president in Pittsburgh on Monday, even though doing so would risk spreading the virus further.

Facebook will ban political ads indefinitely, but not until after polls close on Nov. 3.

A quotation from “The Great Gatsby” — referring to “careless people [who] smashed up things and creatures and then retreated back into their money” — has ricocheted around the social media accounts of Trump’s critics in recent days.

Oil production in Venezuela has slowed to its lowest level in nearly a century, because of years of mismanagement and U.S. sanctions. Only a decade ago, the country was Latin America’s biggest oil producer.

The Nobel Prize in Literature was awarded today to Louise Glück, the American poet, “for her unmistakable poetic voice that with austere beauty makes individual existence universal.”

The Justice Department indicted two British members of an Islamic State cell for kidnapping, jailing and killing hostages, including the journalists James Foley and Steven Sotloff.

States along the Gulf Coast were under storm warnings and watches on Thursday as Hurricane Delta, which mostly spared Mexico the day before, churned north.

Maya Wiley, a former top lawyer for Mayor Bill de Blasio, announced her run for New York City mayor. Wiley did not name de Blasio, who must step down next year because of term limits, but said New Yorkers were facing a “crisis of confidence in our city’s leadership.”

A Kenyan court convicted two men for their role in a 2013 terror attack on an upscale mall in the country’s capital, Nairobi, that killed 67 people.

A Morning read: In financial news — a medium not known for cultivating eccentric or literary voices — there’s no other writer quite like Matt Levine, a former banker whose Bloomberg column has developed a devoted following.

Lives Lived: The singer, actor and record-label owner Johnny Nash helped bring reggae music to a mainstream American audience with his 1972 hit “I Can See Clearly Now.” He died at 80.

IDEA OF THE DAY: Remote debates

Holding an in-person debate during a pandemic creates risks, no matter how many precautions the debate’s organizers take. And the precautions for last night’s debate were pretty weak, as experts told my colleague Apoorva Mandavilli.

But American history offers an alternative to in-person debates — from the first year of televised presidential debates, no less. As Frank Donatelli, a former aide to Ronald Reagan, writes in RealClearPolitics:

On Oct. 13, 1960, Vice President Richard Nixon and Sen. John Kennedy debated for a third time, this time a continent apart. Nixon was in a Los Angeles studio, Kennedy was in an identical studio in New York, and a panel of four questioners and moderator Jack Shadel of ABC were in a third location in Los Angeles.

This remote format has some advantages, Donatelli noted. There is no audience to interrupt. The candidates can’t engage in stunts, like walking over to their opponent. And the debate moderator can control the microphones if one candidate keeps interrupting the other.

Donatelli wrote his article in May, even before the coronavirus infected Trump and parts of his inner circle. Donatelli’s conclusion: “Let the virtual debates of 2020 begin.”

This breezy tofu scramble delivers a satisfying combination of flavors and textures that may convert even the biggest tofu nonbeliever. Scallions, soy sauce and cumin season the dish, and cooked vegetables or leafy greens make delicious additions. Serve with potatoes, tortillas or salad.

The Puerto Rican reggaetonero Bad Bunny is dominating global pop on his own terms.

He has flexible attitudes toward gender and sexuality; he paints his nails purple; and he often talks about depression. His record “YHLQMDLG” became the highest-charting Spanish-language album of all time. And he cracked “the gringo market” — as he calls it — “without assimilating, without making the one concession that seemed unavoidable: his mother tongue,” Carina del Valle Schorske writes in a profile of the artist.

At historically Black colleges and universities, homecoming is more than a football game. It’s a tradition akin to a family reunion. This year, most schools have canceled their festivities because of the pandemic. While it’s not the real thing, this collection of videos, photos and memories of homecomings past helps celebrate the spirit of the event.

“Homecoming itself — it’s like being baptized in Blackness,” said David Thomas, who graduated from Morehouse College in 2005.

In need of some escapism? Here’s an updated list of the 50 best TV shows to check out on Netflix.

The late-night comedians were abuzz over the fly at last night’s vice-presidential debate.

You can find all of our puzzles here.

P.S. The Times is looking for readers to share one place they love and why, to potentially be included in a special edition of the Travel section’s annual “52 Places to Go” list.

Today’s episode of “The Daily” is about the vice-presidential debate. On the latest “Sway,” Kara Swisher talks to Killer Mike.

Ian Prasad Philbrick and Sanam Yar contributed to The Morning. You can reach the team at [email protected].