Good morning. There’s good news on a vaccine, but the next few months of the pandemic will be difficult. 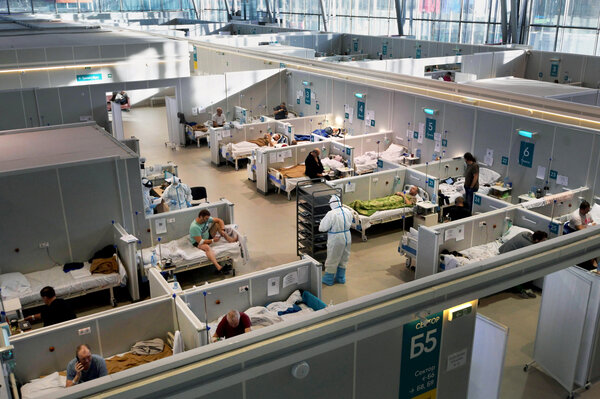 The first story is grim: Worldwide, the virus is spreading more rapidly than at any other point. The U.S. and Europe are both setting records for new confirmed cases, while South America, North Africa, India and other regions are coping with serious outbreaks.

The spread is bad enough that harsh measures — like again shutting some restaurants or banning indoor gatherings — may be necessary to get it under control. Much of Europe has taken such steps in recent weeks. President Trump has opposed them. But President-elect Joe Biden, in appointing a 13-member virus task force yesterday, emphasized that he would take a radically different approach and base his policy on scientists’ advice.

“These are some of the smartest people in infectious diseases,” my colleague Apoorva Mandavilli, a science reporter, said about the task force’s members. Biden, who has worn a mask in public for months, may also be able to increase mask-wearing by delivering a more consistent message about it than Trump has, Apoorva added. Yesterday, Biden implored Americans to wear masks, saying: “Do it for yourself. Do it for your neighbor.”

No matter what, though, much of the world will probably be coping with severe outbreaks — and thousands more deaths each day — for months to come.

The second story is much more encouraging. It’s the rapid progress that medical researchers are making on both potential vaccines and treatments that can ameliorate the virus’s worst symptoms.

Pfizer announced yesterday that early data showed its vaccine prevented Covid-19 in more than 90 percent of trial volunteers. Other companies, including Moderna and Novavax have also reported encouraging news about their vaccines. (The Times’s Carl Zimmer and Katie Thomas answer some common vaccine questions here.)

Even before any vaccine becomes widely available, virus treatment is already improving, thanks to earlier diagnoses and drugs like dexamethasone and remdesivir. The Food and Drug Administration granted emergency authorization yesterday to an Eli Lilly treatment that doctors recently gave to Chris Christie, the former New Jersey governor.

The improving quality of treatments is evident in the death rate: Only about 1.5 percent of diagnosed cases have been fatal in recent weeks, compared with 1.7 percent in late July and early August, and 7 percent during the virus’s initial surge in the early spring.

As these charts show, U.S. deaths have stayed in a narrow range — albeit at a terribly high level — even though cases have been surging since September:

The full picture, via Ashish Jha, dean of Brown University’s public health school: “We all need to keep two seemingly contradictory facts in mind: 1. We are entering the hardest days of the pandemic. The next two months will see a lot of infections and deaths; 2. There is a light at the end of the tunnel. Today, that light got a bit brighter.”

More on the Virus

At least three people who attended an election party at the White House last week have tested positive for the virus, including Ben Carson, Trump’s housing secretary, and David Bossie, who is leading the effort to challenge election results.

Mayor Bill de Blasio warned that New York City was “getting dangerously close” to a second wave, and the governor of New Jersey announced new restrictions on indoor dining. The rate of spread in the region had been very low for months.

Utah will require all residents to wear a mask, as its hospitals are near crisis levels.

Attorney General William Barr has authorized federal prosecutors across the U.S. to pursue “substantial allegations” of voting irregularities. The order goes against a longstanding Justice Department policy not to investigate elections until their results have been certified. There continues to be no evidence of meaningful fraud.

Barr’s authorization prompted the Justice Department official who oversees investigations of voter fraud, Richard Pilger, to step down from the post within hours.

The Trump appointee who leads the General Services Administration has not yet formally recognized Biden as the president-elect, depriving the incoming administration of office space, agency visits and federal funding set aside for the transition.

Mitch McConnell, the Senate Republican leader, did not acknowledge Biden’s victory and said that Trump was “100 percent within his rights” to challenge the results. Two other Republican senators, Ben Sasse of Nebraska and Susan Collins of Maine, congratulated Biden.

Georgia’s two Republican senators, both facing runoff elections in January, called for the state’s top election official to resign, accusing him of failing to oversee an honest election without citing evidence. The official, a Republican, refused to do so, and said the process had been orderly and legal.

Trump is planning to form a political action committee, a federal fund-raising vehicle that could let him retain his hold on the Republican Party even when he’s out of office.

Representative Cheri Bustos of Illinois said that she would not seek another term as chair of the committee that works to elect House Democrats and that she was “gutted” by the party’s losses last week.

Armenia and Azerbaijan signed a Russian-brokered deal to end the war in the border region of Nagorno-Karabakh. The agreement calls for Armenia’s army to withdraw from the region and to be replaced by Russian peacekeepers, and gives Azerbaijan what it has sought for years in negotiations.

Trump fired his defense secretary, Mark Esper. Trump has been unhappy with Esper since this summer, when he said he would refuse to use active-duty troops to control protests.

A police chief in Marshall, Ark., resigned after he called for volunteers to travel to Washington, D.C., to arrest, shoot and kill Democrats on a right-wing messaging site.

Saeb Erekat, the senior Palestinian official and champion of statehood as a resolution to the Israeli-Palestinian conflict, has died at 65.

Alexander Hamilton, the founding father who is celebrated in the musical “Hamilton” as a “revolutionary manumission abolitionist,” bought, sold and personally owned slaves, a research paper found.

An epic drum battle: Nandi Bushell, a British 10-year-old, found an audience with her impressive drum performances on YouTube. But it was her challenge to the Foo Fighters frontman Dave Grohl that propelled her to stardom.

From Opinion: The Supreme Court hears arguments today in a lawsuit that seeks to overturn the Affordable Care Act. Abbe Gluck, a Yale law professor, argues that the case is a test of whether the court is willing to leave political decisions to the elected branches of government.

Lives Lived: During World War II, Viola Smith wrote an essay asking, “Why not let the girls play in the big bands?” Her plea went unheeded, but she later performed at President Harry Truman’s inauguration. She died at 107.

Subscribers make our reporting possible, so we can help you make sense of the moment. If you’re not a subscriber, please consider becoming one today.

The first volume of Barack Obama’s presidential memoir, “A Promised Land,” will be published next week. To get you ready for the attention it will receive, we have prepared a short guide to memoirs, presidential and otherwise.

Can Mr. match, or outdo, Mrs.? The top-selling print memoir in the U.S. is “Eat, Pray, Love” by Elizabeth Gilbert, according to the NPD Group, which began tracking the data in 2004. No. 2 on the list is “Becoming,” by Michelle Obama (which, of course, has been available for fewer years than “Eat, Pray, Love.”)

Analysts expect “A Promised Land” to rise to near the top of the list, too. The book’s publisher, Penguin Random House, ordered a first U.S. printing of three million copies — about one million of which have to be printed in Germany because of a lack of printing capacity in the U.S.

The top 10 list for memoirs also includes: “Between the World and Me” by Ta-Nehisi Coates; “The Magnolia Story” by the former HGTV stars Chip and Joanna Gaines; and “Wild” by Cheryl Strayed.

What will the critics say? Many presidential memoirs are panned or receive mixed reviews, partly because ex-presidents are often unwilling to be fully honest about their disappointments, grudges and more. Two exceptions — considered among the best memoirs by presidents — are by Thomas Jefferson and Ulysses S. Grant, as Allen Barra explains in The Daily Beast.

Last year, The Times’s book critics released a list of the 50 best memoirs of any kind over the past 50 years, including those by Gore Vidal and Maxine Hong Kingston.

Not his first book. Obama, like Theodore Roosevelt and John F. Kennedy, is on the short list of presidents who were published authors before they were well-known politicians. Obama’s two earlier books, “Dreams From My Father” and “The Audacity of Hope,” were both best sellers, although the first one became a best seller only after his star turn as a speaker at the 2004 Democratic convention.

Make a weeknight chili in a skillet. It’s cheesy and vegetarian, with eggs nestled into it in a preparation similar to a shakshuka. Mop up leftovers with tortillas.

What to Listen to

The pangram from yesterday’s Spelling Bee was beatific. Today’s puzzle is above — or you can play online if you have a Games subscription.

P.S. Our colleague Tara Parker-Pope shared a beautiful video of a former ballerina who has Alzheimer’s, transported by a recording of “Swan Lake.” “Music holds (and unlocks) so many of our memories,” Tara wrote.

“Lockdown” is Collins English Dictionary’s word of the year. (Some other words on the shortlist: “coronavirus,” “self-isolate” and “Tiktoker.”)

Today’s episode of “The Daily” is about election polls. On the latest “Sway,” the psychotherapist Esther Perel offers post-election therapy.

Lalena Fisher, Claire Moses, Ian Prasad Philbrick and Sanam Yar contributed to The Morning. You can reach the team at [email protected].