A New Year’s Eve unlike any other.

Good morning. It’s the first day of the new year.

We’re covering the start of 2021, President Trump’s handling of the pandemic and lessons for the European Union from Brexit. 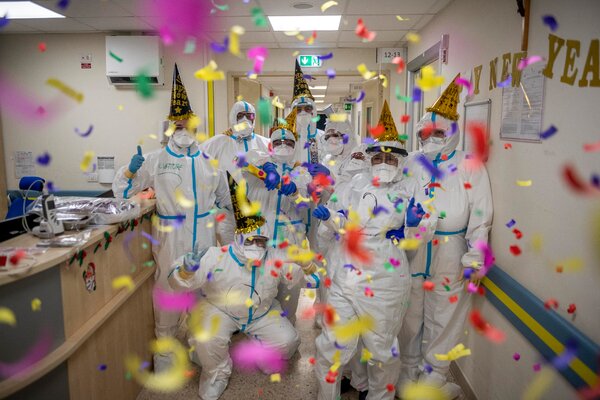 Most places in the world, from a virtually coronavirus-free New Zealand to an Ireland in lockdown, have now greeted the arrival of 2021.

In Auckland, a fireworks show and parties went on as usual. The Chinese city of Wuhan, where the virus first emerged, enjoyed boisterous festivities. But in general, celebrations were muted — or virtual — as the world bade good riddance to a difficult year. In most cities, there were no roaring crowds, no gatherings for fireworks shows and, let’s hope, no strangers kissing at midnight.

Though Madrid eased its curfew for the night from midnight to 1:30 a.m., people were told to stay at home as much as possible, to eat the traditional New Year’s Eve grapes while watching events on TV (and gathering in groups of no more than six). London’s Big Ben, largely silent in recent years as its clock tower underwent renovations, rang 12 times at midnight. And in Paris, the only people roaming the Champs-Élysées were some of the 100,000 police officers deployed around the country to prevent crowds from gathering.

Quote: In a televised address from the Élysée Palace, President Emmanuel Macron of France — recovering from his own bout of the virus — said that “the year 2020 ends as it unfolded: with efforts and restrictions.”

As the U.S. confronted new waves of infection and death through the summer and fall, the president’s approach to the pandemic came down to a single question: What would it mean for him?

The result, according to interviews with current and former administration officials, was a lose-lose situation. Not only was President Trump soundly defeated by Joseph R. Biden Jr., he missed his chance to show he could rise to the defining challenge of his tenure.

By the numbers: As of Thursday, 342,577 Americans had died from the pandemic.

Analysis: Aides’ efforts to persuade Mr. Trump to promote mask-wearing and social distancing were derailed by his conviction, contradicted by polling data, that his supporters would rebel against anything that smacked of limiting their personal freedom.

Untold numbers of vaccine doses will expire before they can be injected into American arms, while communities around the country are dealing with more bodies than their mortuaries can handle.

A pharmacist at a Wisconsin hospital has been arrested and accused of intentionally removing more than 500 doses of coronavirus vaccine from refrigeration last week, knowing that they would be rendered useless.

Some family doctors in Britain said they would defy the government’s instructions to delay giving patients their second dose of vaccine, signaling unease over officials’ new plan to prioritize giving more people the partial protection of a single dose.

As of today, with the Brexit transition period over, Britain will no longer be part of the European Union’s common market and customs union.

Though both sides lost in Britain’s departure, the long-term damage looks to be uneven. Scotland and Northern Ireland may opt to leave the United Kingdom and, by different means, rejoin the European Union. The E.U. itself, by contrast, has in some ways been galvanized by the trauma of Brexit. The nations of Europe have seen up close that a divorce is always a defeat — and so is a negotiation whose end point is new barriers.

Related: Spain and the European Union will share oversight over the flow of goods and people to the British territory of Gibraltar, where people have worried about being left isolated and economically pinched outside the bloc.

If you have 12 minutes, this is worth it

Above, a wedding at the Sakura Park gazebo in Manhattan, broadcast live over Zoom. “Nothing about our wedding was what we planned or expected, but I wouldn’t trade any moment of it,” writes Katherine Smith, from Arlington, Va.

We asked readers to share memories of good times from this year and reflect on what they mean now. We received more than 750 submissions from all over the world — from China to Australia, Mexico to Italy, and across the United States — chronicling moments of lightness, growth and utter joy.

China: With loans, grants and even farm animals given to struggling villagers, China has spent heavily to help its poorest citizens — an approach that few developing countries can afford, and that even Beijing may struggle to sustain.

Giant skeletons and puppy shortages: What social trends like these tell us about the uncertain economic future.

FarmVille: The simple but addictive Facebook game that took over social media feeds a decade ago has shut down. At its peak, it attracted tens of millions of daily players.

Snapshot: Above, migrants at the abandoned Lipa camp near Bihac, Bosnia, on Wednesday. About 700 migrants without winter clothes, sleeping bags or tents were stranded there in freezing temperatures on New Year’s Eve, as the authorities struggled to balance their safety against growing hostility from local populations.

The losses that changed 2020: As Covid-19 swept the United States, the killing of George Floyd galvanized a racial justice movement, and the death of Ruth Bader Ginsburg upended the Supreme Court.

What we’re reading: This article from The Guardian on burnout — and learning that work alone might not sustain you. “In among the usual panic, exhaustion, misery and self-loathing, there was a steely center of clarity, and even resolve,” writes its author, Elle Hunt. “I didn’t want to live this way any more.”

Cook: Pull out all the stops for a New Year’s Day feast with this wintry mushroom bourguignon.

Learn: Each day, our editors collect some of the most interesting, striking or delightful facts to appear in articles throughout The Times. Here are 74 standouts from the past year.

Deal: As we head into 2021, here’s our advice for replacing loneliness with opportunities for connection.

As we enter another year, At Home has our full collection of ideas on what to read, cook, watch, and do while staying safe at home.

Dropping the ball on Times Square

For the first time in decades, Times Square was closed to the public on New Year’s Eve. Instead, dozens of frontline workers and their families, clad in masks, were honored with spots near the stage.

“There are absolutely no spectators allowed in Times Square,” Chief Terence Monahan, the New York City Police Department’s top uniformed member, said at a news conference. “Don’t even attempt to come down there and watch it.” he added.

A ball drop — or something like it — has been held in Midtown Manhattan since 1904, when, as the clock struck midnight, there was an explosion of dynamite, and the newly constructed New York Times Building appeared to catch fire.

(The flames were controlled and very much intentional. In fact, they were the idea of The Times’s publisher, Adolph S. Ochs, who was hoping to show off the new building after dragging the paper back from the brink of bankruptcy.)

“No more beautiful picture was ever limned in fire on the curtain of midnight,” The Times reported the next day. “From the four corners of the skyscraper lambent flames played. From base to dome the giant structure was alight.”

Since the ball itself was introduced in 1907, it has been lowered on New Year’s Eve nearly every year, with breaks only in 1942 and 1943 because of World War II-related “dim-outs” that required lights to be shut off as a protection against air attacks.

This year, although the ball did drop, all uninvited guests were turned away, with pedestrian traffic limited as of 3 p.m. on Thursday. All in all, a far more muted affair — in keeping with a highly altered year.

That’s it for this briefing. I’m off next week, but you’ll be in capable hands for the briefings. Wishing you a wonderful weekend, and a peaceful start to 2021.

Thank you
To Theodore Kim and Jahaan Singh for the rest of the break from the news. You can reach Natasha and the team at [email protected]

P.S.
• There’s no new episode of “The Daily” today. Instead, we’re listening to ten standouts from the year.
• Here’s today’s Mini Crossword puzzle, and a clue: Brief romantic relationship (five letters). You can find all our puzzles here.
• The word “wackadoodlery” first appeared in The Times this week, according to the Twitter bot @NYT_first_said.