Israel reopens to its vaccinated populace. 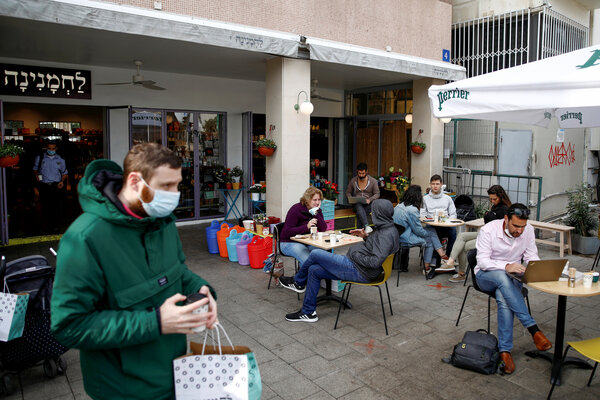 Prime Minister Benjamin Netanyahu enjoyed a cappuccino and cake on the terrace of a Jerusalem cafe on Sunday to signal the broadest reopening of Israel’s economy since the first coronavirus lockdown began a year ago. Some 55 percent of the population has received one dose of the Pfizer-BioNTech vaccine and more than 41 percent has gotten two doses.

Under Israel’s “Back to Life” program, restaurants have reopened with social distancing and restrictions on occupancy. Indoor seating is available only to Green Pass holders — people over 16 who are fully vaccinated.

After weeks of tight restrictions on entry to the country, all citizens and permanent residents will be allowed to return to Israel, with a cap on numbers that will increase over the week from 1,000 to 3,000 people per day.

Pope Francis concluded his three-day visit to Iraq — a boon to the diminishing Christian community, a boost for the beleaguered Iraqi government and a possible health hazard, as many participants found social distancing impossible and disregarded masks.

The Dalai Lama, 85, received his first dose of the Oxford-AstraZeneca coronavirus vaccine on Saturday in the northern Indian town of Dharamsala.

The U.S. Senate passed its version of the $1.9 trillion pandemic relief bill on Saturday. The measure now goes back to the House of Representatives, which must approve the Senate’s changes before President Biden can sign it into law.

Explosive revelations in Oprah’s interview with Meghan and Harry

In one of the most anticipated interviews in recent times, Meghan Markle and Prince Harry presented their side of a sensational royal rupture to Oprah Winfrey. The interview, which aired on Sunday night on CBS in the U.S., will be screen on ITV in Britain on Monday.

A year after their fairy-tale wedding, Meghan said, her life as a member of the British royal family had become so emotionally unbearable that she contemplated suicide. “I was ashamed to have to admit it to Harry,” Meghan said of her suicidal thoughts. “I knew that if I didn’t say it, I would do it. I just didn’t want to be alive anymore.”

Meghan revealed that three days before their official wedding, she and Harry had gotten secretly married, courtesy of the Archbishop of Canterbury, in a backyard ceremony.

Meghan and Harry announced that they were expecting a girl later in the year.

Meghan described conversations Harry had with unnamed members of his family on the subject of their then-unborn first child’s skin tone.

A series of explosions attributed to mishandled explosives at a military base rocked the city of Bata in the central African nation of Equatorial Guinea on Sunday, killing at least 20 people and injuring more than 500, the authorities said.