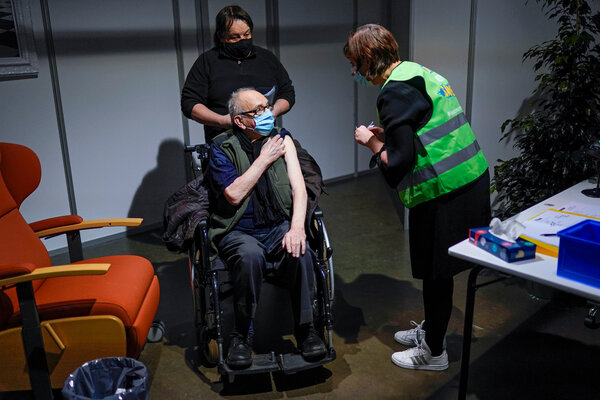 The European Medicines Agency, the E.U.’s top drug regulator, will most likely pronounce the AstraZeneca coronavirus vaccine safe after concerns about a potential link with blood clots or abnormal bleeding led to it being suspended in multiple countries.

But millions of Europeans have been shaken by the back-and-forth and will be more hesitant about vaccination.

In France, the government has swerved from lauding the AstraZeneca inoculation a few days ago to suspending it. A poll by the Elabe Institute published Tuesday showed that only 20 percent of French people now trust the AstraZeneca vaccine, with 58 percent skeptical and 22 percent undecided.

“I trust AstraZeneca; I trust the vaccines,” Ursula von der Leyen, the top European Union official, said at a news conference in Brussels. But reassuring words may not persuade Europeans who are experiencing policy whiplash.

Quote: “Before this, I was so pro-vaccines I would have dipped children into them,” said one tourism worker in Milan. But now, “I would not get AstraZeneca, because that would be like playing Russian roulette.”

By the digits: So far, only 9.8 percent of E.U. residents have been vaccinated, leaving the bloc far behind Britain and the U.S.

Outrage and fear in Asian-American communities

Shootings at massage parlors in the Atlanta area on Tuesday that left eight people dead, including six Asian women, have put Asian communities across the U.S. on high alert and prompted law enforcement officials to increase patrols.

The gunman told the police that he had a sexual addiction and had carried out the shootings to eliminate his “temptation,” the authorities said on Wednesday. The police captured the 21-year-old as he was on his way to Florida, where he may have been planning more violence. He has been charged with several counts of murder.

Though the shooter denied it was a hate crime, investigators said it was too early to be sure. Asian-Americans were targeted in nearly 3,800 hate incidents in the past year.

Asking for help: Asian-Americans in the San Francisco Bay Area are calling for more police patrols after a string of attacks there. Older residents in particular have been the targets of robberies, verbal attacks related to the coronavirus pandemic, and assaults.

Domestic terrorism: A new intelligence report warns of the rising threat of domestic terrorism, adding urgency to calls for more resources to fight the growing problem of homegrown extremism and highlighting the threat from militias.

The travel certificate that could save Europe’s summer

The E.U. on Wednesday proposed a free certificate that would allow people to travel more freely if they could show proof of vaccination, a negative test or a documented recovery from the coronavirus. It is intended to salvage the summer for tourism-dependent member states.

“The Digital Green Certificate will not be a precondition to free movement, and it will not discriminate in any way,” Didier Reynders, a top E.U. official, said, adding that the aim was to “gradually restore free movement within the E.U. and avoid fragmentation.”

Freedom of movement is the cornerstone of the bloc, but travel restrictions are traditionally under the purview of national governments. The commission’s plan is yet another bid to coordinate what is now a chaotic patchwork of disparate national measures, significantly hindering travel within the previously borderless zone.

Poland, which has experienced a significant upswing in coronavirus cases, will tighten restrictions nationwide starting on Saturday.

The occupied West Bank and the blockaded Gaza Strip received their first shipment of Covid-19 vaccines on Wednesday from the global vaccine sharing initiative Covax.

Britain’s National Health Service warned Wednesday of a “significant reduction” in vaccine supplies from manufacturers that would last a month.

A Japanese court found that it was unconstitutional not to recognize same-sex unions.

President Biden said it would be “tough” to meet a May 1 deadline to withdraw all remaining U.S. troops from Afghanistan.

Tashnuva Anan Shishir, who waged a decades-long quest for acceptance in Bangladesh, made history as the country’s first transgender news anchor.

With climate concerns growing, steel companies face an inevitable crunch. And while there are solutions, the costs are likely to run into tens of billions of dollars in Europe alone.

What Else Is Happening

Above, a library book that was 23,000 days overdue. In July 1957, Betty Diamond, then 10 years old, checked out “Ol’ Paul, the Mighty Logger,” a collection of Paul Bunyan tales. After 63 years, she recently sent it back, along with a $500 donation to the Queens Public Library, which more than covered the late fees.

In what experts called a scientific breakthrough, researchers in Israel grew mouse embryos halfway to term in artificial wombs — glass vials inside incubators, floating in a special nutrient fluid.

New generations of the regent honeyeater, a critically endangered Australian songbird, are failing to learn the tunes they need for courtship. It could lead to their extinction.

Serbia, which has signed deals for 11 million doses of Russian, Chinese and Western vaccines, has become Europe’s second-best vaccinator after Britain. It has sealed deals for more than 11 million doses with Russia and China, whose products have not been approved by European regulators, as well as with Western drug companies.

Diplomatically, Serbia’s success makes President Aleksandar Vucic look good as the E.U. struggles; the country has even donated shots to other parts of the region.

What American theater can learn from France

Arts workers are protesting closings and occupying playhouses all over France. But on Broadway, that drama has yet to open, writes our chief theater critic. This is an excerpt.

The pandemic has been a disaster for the theater and potentially more damaging to performing arts industries than to any other. And yet, in the long run, how we repair our stages could also lead to long-needed changes that would elevate the people who work on, under and behind them.

While musicals and dramas are often seen as inconsequential entertainment in the U.S., many French theater workers frame art-making as a matter of both liberty and labor and see themselves as frontline workers. Protests there in support of reopening theaters maintain that the arts are fundamental not just to the economy but to the moral health of a country. They are worth marching for.

The U.S. is a country that treasures its cultural heritage without wanting to support the labor that maintains it. Cultural spending per capita in France is about 10 times that in the U.S. — one reason there are six national theaters in France, not just the three occupied by protesters last week.

Arts workers shouldn’t be remembered just in emergencies and just as charity. Nor should they be remembered solely for their economic impact. It is often argued that Broadway alone contributes $14.7 billion to New York City’s economy, as if that were the point when it is really just the bonus.

Surely our theater artists, those highly skilled laborers, can figure out, if anyone can, how to demonstrate that idea — if necessary, in front of the Majestic Theater, with trombones and Rockettes in tow.

Linguine with chickpeas, broccoli and ricotta. Enjoy with crusty bread, good wine and a sense of accomplishment for getting dinner on the table in under half an hour.

In Brontez Purnell’s new book, “100 Boyfriends,” a rotating cast of narrators share stories of desire and heartbreak. Our reviewer calls it a “hurricane” of a novel.

In a new documentary, “Dancing With the Devil,” Demi Lovato opens up about her queerness, her near-fatal overdose and her journey to living her truth. “I’m ready to feel like myself,” she said.

They’re huggable and collectible — and they are taking over: Meet Squishmallows.

That’s it for today’s briefing. See you on Friday. — Natasha

P.S. In honor of Women’s History Month, Charo Henríquez was profiled by Ms. Magazine for her role as editor of newsroom development and support at The Times.

The latest episode of “The Daily” is about the fight around minimum wage in the U.S.

You can reach Natasha and the team at [email protected].