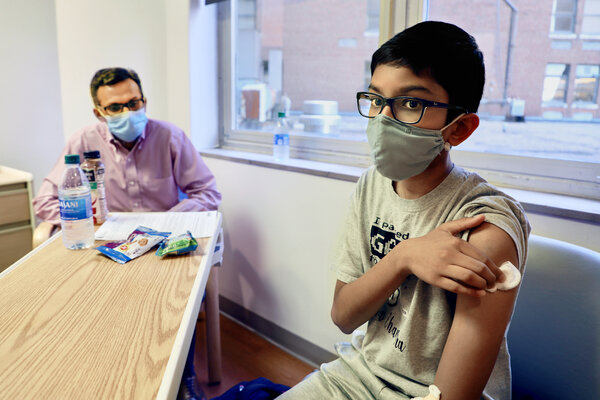 The Pfizer-BioNTech Covid-19 vaccine is extremely effective in adolescents 12 to 15 years old, perhaps even more so than in adults, the companies reported.

No infections were found among the children who received the vaccine in a clinical trial. They produced strong antibody responses and experienced no serious side effects. The findings could help speed a return to normal. Experts have said that children are the next vaccination frontier.

Pfizer’s chief executive, Albert Bourla, said the data would be submitted to drug regulators around the world for approval, with the hope of vaccinating the 12-15 age group before the start of the next school year.

Impact: The trial involved 2,260 vaccinated adolescents ages 12 to 15. The adolescents who received the vaccine produced nearly twice the levels of antibodies on average compared with participants 16 to 25 years old in an earlier trial. Company scientists plan to start testing the vaccine next week in younger children, ages 2 to 5, followed by trials in children ages 6 months to 2 years.

President Emmanuel Macron imposed a third national lockdown in France for a month, in a desperate move to halt a new deadly wave of infections.

Russia said it was the first in the world to approve a Covid-19 vaccine for animals, intended for use on fur farms or for pet cats or dogs.

China sought to shift attention away from a World Health Organization inquiry into the origins of the virus, arguing that health experts should start looking for clues in other countries.

President Joe Biden is set to unveil a $2 trillion infrastructure plan, a far-reaching proposal to fix the country’s aging bridges, roads, rail lines and utilities. It would return government investment in those areas, as a share of the economy, to its highest levels since the 1960s.

The plan is the first step in a two-part agenda to overhaul American capitalism, fight climate change and improve economic productivity. It focuses on transforming the two largest sources of planet-warming greenhouse gas pollution in the U.S.: cars and electric power plants.

Details: The plan provides for a network of 500,000 electric car chargers, upgrades to the electrical grid and affordable housing. It proposes spending $174 billion to encourage the manufacture and purchase of electric vehicles with tax credits and other incentives to companies that make electric vehicle batteries in the U.S. instead of China. Automakers embraced the focus on electric cars.

Response: Business groups and corporations have reacted negatively to Mr. Biden’s proposal to fund the plan with an increase of the corporate tax rate to 28 percent from 21 percent.

A hunger crisis in Yemen

For the second time in three years, the threat of widespread famine hangs over the war-torn country, where millions are displaced and struggle daily to find food.

The war has led to chronic food shortages in what was already the Arab world’s poorest country. Famine was averted in 2018 only by a large influx of foreign aid. But the threat is greater this time, aid groups say, as the war grinds on and the pandemic has left donor nations more focused on internal matters.

On the ground: When Iman Murshid’s 8-month-old son came down with a fever and vomiting, she spent three days trying to get a ride to the nearest clinic, eventually setting out on foot for two hours with her child. Even after a week of treatment, his acute malnutrition has left him weak and barely able to move.

Details: The United Nations says that 3.6 million Yemenis face emergency food shortages and 16,500 have reached catastrophic levels. It estimates that 400,000 children are at risk of dying of hunger.

Indonesian officials say they have found the cockpit recorder from Sriwijaya Air Flight 182, nearly three months after it crashed. The voice recorder could reveal the final words of the pilot and co-pilot as the Boeing 737-500 plummeted into the sea on Jan. 9.

Indians were horrified after a 16-year-old girl who came forward with allegations of rape was tied by the wrist to her attacker and paraded through her village. The episode has renewed calls for an end to victim shaming.

It took six days to prise free the giant cargo ship that had clogged the Suez Canal, but it could take years for cargo companies, insurers, government authorities and lawyers to sort out who will pay for the losses.

A frightening flesh-eating bacteria has resurfaced in southeastern Australia in recent years. The increase in cases of Buruli ulcer, as the disease it causes is known, and growing global interest in infectious diseases, are raising hopes that scientists might finally have the resources to crack its code.

Prosecutors in Manhattan who have been investigating former President Trump and the Trump Organization subpoenaed the personal bank records of the company’s chief financial officer and are scrutinizing gifts he received from the former president.

Building a mosque in France is a tortuous endeavor even in the best of times. But now it may get harder, with tighter restrictions on foreign donations under President Emmanuel Macron’s new law against Islamism. About two million Muslims in France practice their faith in 2,500 mosques that receive little or no public money.

Digging into your garden

Margaret Roach, who writes the In Garden column for The Times, wants readers to see planting and landscaping as more than outdoor decorating. She spoke to Times Insider about finding deeper meaning in gardening. Here’s an excerpt.

How did you first get into gardening?

In my mid-20s, my father had died and my mother, who was about 49 at the time, got early-onset Alzheimer’s. Since she was a widow, I came home to Douglaston, Queens, to manage the situation and I ended up getting a job as a “copy girl” at The Times at night and caring for her during the day. Someone thankfully gave me a James Underwood Crockett book, a companion to the PBS show “Crockett’s Victory Garden,” as a gift, and I just started doing everything in the book.

What did you take away from that experience?

It was occupational therapy. I had to be near my mother, but I could be digging in the front yard or pruning. So my initial connection with gardening was refuge. That was what did it for me — with the imprint of my grandmother Marion, who was a great gardener.

What do you hope readers take away from your column?

For me, the garden is kind of part Buddhist retreat, part science laboratory. It’s not outdoor decorating. There’s a lot of beauty, a lot of aesthetics — but that would be a shallow interpretation and a shallow experience.

I want to encourage people to dig into the whole garden, because it offers everything — it offers a lens into the food web, to the story of evolution and adaptation among species.

In “Godzilla vs. Kong,” ape and lizard go toe-to-toe. It’s an action movie made with lavish grandiosity, zero pretension and not too much originality, our film critic writes.

Brisk walking improves brain health in aging people with memory impairments, according to a new study.

P.S. Isabella Kwai, our reporter based in London, joined the Press Play podcast to discuss Sarah Everard, the vigils in her honor and violence against women in Britain.

The latest episode of “The Daily” features a conversation about voting rights with U.S. Senator Raphael Warnock.

Carole Landry contributed. You can reach Melina and the team at [email protected].