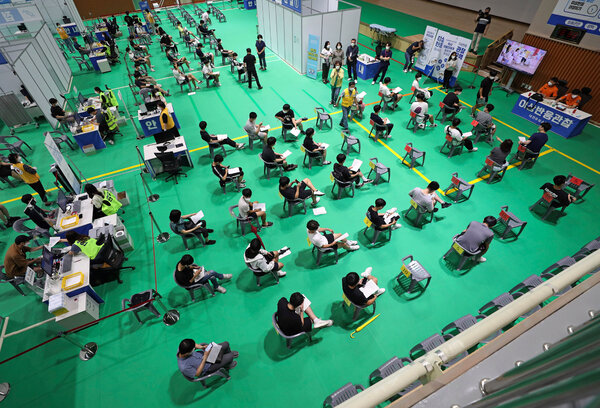 Once a model in fighting the pandemic, South Korea has been slow to vaccinate. Supply problems plague the vaccine campaign, and the country only started inoculating people in their 50s against the coronavirus this month.

“There are 401,032 people waiting in front of you,” a government website informed one person who shared on social media the ordeal of booking an appointment. “Your expected waiting time: 111 hours, 23 minutes and 52 seconds.”

As the country faces its worst wave of infections, South Koreans are more desperate than ever for shots. The country recorded its highly daily case count on Wednesday.

Background: In November, when people accused the government of being slow to secure vaccine doses, officials told them not to worry, given South Korea’s success in controlling the spread of Covid-19. The country started vaccinations in late February, but in late June, its stockpile began to run out as a handful of vaccine makers struggled to meet global demand.

Context: The country is among the least vaccinated in the Group of 20 nations. Only 34.9 percent of its 5​2 million people had received at least one dose as of Wednesday, well below the 55 to 70 percent in other developed nations​.

Vaccinated travelers from the U.S. and the E.U. will be allowed to enter England and Scotland without quarantining starting Monday.

The U.S. will send nearly 10 million shots to Nigeria and South Africa, the continent’s two most populous nations.

Google said that it would require employees to be vaccinated and pushed back its return-to-office date.

After bowing out of the women’s gymnastics team finals at the Tokyo Games, Simone Biles — the greatest gymnast in history — said she would also skip the all-around individual competition on Thursday. Biles will be evaluated daily to see if she will participate in the event finals next week.

The U.S. Olympic team’s biggest star said she was not mentally prepared to continue under the weight of expectations. In the hours before the team final, she said she was shaking and couldn’t nap.

Context: Her withdrawal follows a falter at the first event of the team final. During her vault, Biles got lost in the air and ended up performing a much simpler move than she had planned. On the landing, she bounded forward to stay on her feet.

Mental health: Though sports psychologists say a stigma persists about athletes and mental health, Biles was also widely embraced as the latest elite athlete who had the courage to acknowledge her vulnerability.

In other Olympics news:

Worried about the war in Afghanistan, China is stepping up its diplomatic efforts to encourage a political settlement after the U.S. military withdrawal from the country.