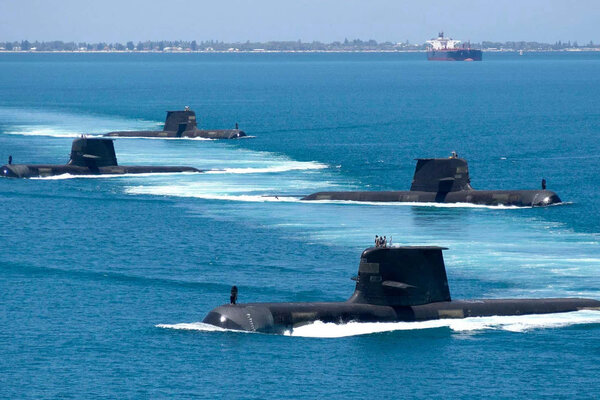 The U.S., Britain and Australia counter China in the Pacific

If the plan comes to fruition, Australia may be conducting routine patrols through areas of the South China Sea that Beijing now claims as its own exclusive zone. The announcement is a major step for Australia, which until recent years has been hesitant to push back directly at core Chinese interests.

The decision to share the technology for naval reactors, even with a close ally, was a major move for President Biden — one bound to raise protests by the Chinese and questions from American allies.

Details: American officials said Australia had committed never to arm the submarines with nuclear weapons; they would almost certainly carry conventional, submarine-launched cruise missiles. Yet, even conventionally armed submarines could alter the naval balance of power in the Pacific.

Quotable: “Attack submarines are a big deal, and they send a big message,” said Vipin Narang, a Massachusetts Institute of Technology professor who studies the use of nuclear weapons in great-power competition. “This would be hard to imagine five years ago.”

In an undisclosed location outside Russia, five people have been meeting regularly for months to plot how to deliver an improbable blow to Vladimir Putin, the Russian president, in this weekend’s election.

They are exiled allies of the imprisoned opposition leader Aleksei Navalny. Their strategy is to use the parliamentary election to undermine Putin’s governing United Russia party, coalescing opposition-minded voters around one particular candidate running against United Russia in each of the country’s 225 electoral district — whether a liberal, nationalist or Stalinist.

“We want as many non-Kremlin-approved politicians as possible to end up in parliaments, including regional ones,” said Ruslan Shaveddinov, one of the Navalny allies. “This, at any rate, creates turbulence in the system, which is very, very important to us.”

Details: Russians can punch their address into the “Navalny” smartphone app, which then responds with the names of the candidates they should vote for — whether or not voters agree with those persons’ views.

Data: Even a state-run pollster, VTsIOM, puts United Russia’s current level of support at 29 percent — down from about 40 percent ahead of the previous election, in 2016 — and the authorities appear to be spooked by the push.

In her annual speech on the state of the European Union, Ursula von der Leyen, president of the bloc’s executive arm, pledged to deliver an extra 200 million Covid vaccine doses by mid-2022, in addition to 250 million doses already promised by the end of the year.

So far, E.U. nations have fallen behind on their promises, having donated only 21 million doses as of early September, according to European Commission figures. The bloc has instead focused on exporting vaccines, about 700 million, but most of those doses have been sent to richer nations.

“The gap between the E.U.’s beautiful rhetoric about stopping the Covid-19 pandemic and its actions is embarrassingly wide,” said Dr. Christos Christou, international president of Doctors Without Borders.

What’s next: To prepare for any future pandemic, von der Leyen announced the creation of a biomedical agency, the Health Emergency Preparedness and Response Authority. It is set to receive 50 billion euros (about $59 billion) in funding by 2027.

The Biden administration’s booster policy is in flux after new studies added to a chorus of dissent.

A new study from Israel has fanned the debate over booster doses.

A vaccine mandate for health workers went into effect in France, but some are still holding out.

The W.H.O. said that North and Central America were driving a hemispheric coronavirus surge.

Pedro Sánchez, prime minister of Spain, met with the leader of Catalonia, Pere Aragonès, in an attempt to resolve the fate of the region.

Boris Johnson, the British prime minister, reassigned the foreign minister, Dominic Raab, after the messy military exit from Afghanistan, a setback for a government seeking a greater role on the world stage.

Emmanuel Macron, France’s leader, announced that French military forces had killed the leader of the Islamic State in the Greater Sahara.

When 1,400 white-sided dolphins were killed in the Faroe Islands last weekend, the largest catch ever recorded in the area, graphic news coverage produced outrage.

The streetwear veteran Nigo, founder of A Bathing Ape, is the new head of Kenzo.

A former television intern who became a prominent voice in China’s #MeToo movement has vowed to fight on after losing a landmark case.

Canada’s Conservative Party has moved into a statistical tie with the Liberals by leaning left, with days remaining until snap elections determine the country’s leadership.

News From the U.S.

In the wake of Hurricane Ida, the greatest killer in New Orleans wasn’t the storm — it was the heat.

Latino voters and voters concerned about the pandemic helped Gavin Newsom, the governor of California, easily fend off a recall effort.

Pope Francis addressed a debate roiling the Catholic Church in the U.S., where conservative bishops want to deny communion to politicians, like President Biden, who support abortion rights: “Be a pastor, don’t go condemning.”

The mathematician Ingrid Daubechies’ pioneering work in signal processing helped make our electronic world possible, and beat a path for women in the field.

Why is everyone talking to Ibai Llanos?

After the soccer superstar Lionel Messi left F.C. Barcelona for Paris St.-Germain, his first interview was not with a television network or a major paper. It was filmed on a phone by 26-year-old Ibai Llanos and two of his friends for his Twitch channel.

Llanos got his start as a teenager, filming himself and his friends playing video games. That led to a job as an announcer for Spain’s esports league. When Spain went into lockdown, his viewership figures exploded, and he became one of the 10 most followed creators on Twitch.

Among his fans were soccer pros, whom he now interviews in a weekly long-form segment on his channel. He does not try to ask them challenging questions about what, for them, is often simply their work. Instead, he tries to talk to them as informally as possible, while doing something — playing video games — that they enjoy.

Braised fresh black-eyed peas with baby turnips are a good way to fall in love with the dreamy beans of September.

Kasey Musgraves’s “Star-Crossed” is a song cycle about the collapse of her marriage, rendered largely without judgment or regret.

What if the Inca conquered Europe? “Civilizations,” Laurent Binet’s counterfiction of world history that poses this question, attests to his status as one of the most intellectually game writers of our time.

And here is the Spelling Bee.

That’s it for today’s briefing. Thanks for joining me. — Whet

P.S. The Times announced a new team of journalists tasked with deepening the audience’s trust in the paper.

The latest episode of “The Daily” is on Mexico’s path to legalizing abortion.

You can reach Whet and the team at [email protected].