We’re covering Biden’s call to shore up the global response to the pandemic and some signs of trouble for China’s economy. 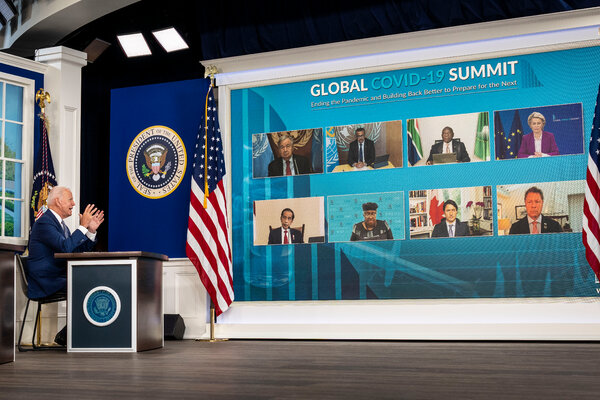 Biden urges the world to ‘go big’ on Covid

President Biden on Wednesday called on leaders, pharmaceutical executives and civil society organizations to forge a global plan to fight the coronavirus pandemic.

Speaking at a virtual Covid-19 summit organized with the U.N., Biden cited two urgent goals: vaccinating the world, and solving an oxygen-supply crisis. “We’re not going to solve this crisis with half measures or middle-of-the-road ambitions — we need to go big,” the president said. “It’s an all-hands-on-deck crisis.”

Many of the leaders at the summit sent prerecorded videos, so a debate and an immediate consensus on a plan were unlikely. Pfizer announced a deal on Wednesday with the Biden administration to sell 500 million doses to the U.S. that will be donated to nations lacking the shots.

Earlier this week, the chief scientist of the World Health Organization pleaded with nations to work together to distribute vaccines and share excess supplies. “A country-by-country approach, a nationalistic approach, is not going to get us out of this pandemic,” Dr. Soumya Swaminathan said.

Vaccine inequality: Less than 10 percent of the population of poor nations — and less than 4 percent of the African population — has been fully vaccinated against Covid. Covax, the international vaccine initiative, is behind schedule on delivering shots to the low- and middle-income nations that need them most.

Scientific advisers to the U.S. Centers for Disease Control and Prevention are meeting today and tomorrow to decide who should get Pfizer booster shots and when.

Brazil’s health minister tested positive for the coronavirus at the U.N. General Assembly.

President Rodrigo Duterte of the Philippines railed against the world’s affluent countries at the U.N, accusing them of hoarding vaccines while the poor “wait for trickles.”

Australia is planning to lift travel restrictions by Christmas, months ahead of schedule.

Global markets are watching as the Chinese property giant Evergrande flirts with default and investors are worried that any collapse could ripple through the international financial system. Evergrande could be China’s “Lehman moment,” some market watchers say, referring to the collapse in 2008 of the Lehman Brothers investment bank.

But the broader threat for Beijing is that China’s growth is slowing, and the government may have to work harder to rekindle it.

The indicators: Retail sales were weaker than expected last month, led by slow car sales. Industrial production slackened. Investment in infrastructure, which Beijing has counted on for growth, is keeping the economy afloat right now. But it may not be sustainable for long.

Predictions: Bank of America on Tuesday lowered its forecast for China’s economic growth next year, to 5.3 percent from 6.2 percent.

The latest: Evergrande said that it had reached a deal with investors that gives it some breathing room, but it’s unclear what will happen on Thursday, when bond-interest payments are due.

The adviser, Serhiy Shefir, was unharmed, but his driver was wounded when shots were fired at his car outside Kyiv on Wednesday by a person or people hiding in the woods by the road. The authorities said it was an assassination attempt.

President Volodymyr Zelensky said he would immediately return to Ukraine from New York, where he was attending the U.N. General Assembly to speak against Russia’s military intervention in eastern Ukraine.

Zelensky said that while he considered the attack a message to him personally, he would not be deterred by it. “Saying hello to me by shooting from the woods at the car of my friend is weakness,” he said.

The motive: An adviser to Zelensky’s chief of staff linked the attack to the president’s efforts to limit the influence of oligarchs. The authorities said there were no suspects and that no one had been arrested.

Context: Shefir, 57, is considered the president’s closest confidant. Together with his brother and Zelensky, they founded a television production company in 2003 that propelled Zelensky to fame. The two are neighbors.

News From Asia and Australia

India’s Supreme Court opened the door for women to pursue military careers at the highest levels.

A 5.9-magnitude earthquake damaged buildings in Melbourne. There were no immediate reports of serious injuries or deaths.

A U.S. drone strike that killed 10 civilians in Afghanistan last month calls into question the reliability of the intelligence that will be used to conduct future American operations there.

President Biden spoke with President Emmanuel Macron of France for the first time since the submarine deal with Australia was announced. The White House described the conversation as “friendly.”

Thousands of people fled areas of La Palma, one of the Spanish Canary Islands, as lava from a volcanic eruption destroyed hundreds of homes and prompted warnings of toxic explosions.

Former President Donald Trump filed a lawsuit accusing his niece, Mary Trump; The New York Times; and three of its reporters of conspiring to obtain his confidential tax records.

The Japanese photographer Rinko Kawauchi used to try to take her daughter to visit her parents near Kyoto every two months. The pandemic disrupted that habit, but this summer, she captured what it was like to resume the old routines after her parents were vaccinated.

A Japanese twist on ‘Star Wars’

Some of Japan’s most creative animation studios get to explore a galaxy far, far away in the anime anthology series “Star Wars: Visions” on Disney+. The show, which consists of short films with vastly different animation styles, pays tribute to the Japanese influence on “Star Wars,” Robert Ito writes in The Times.

George Lucas has mentioned Star Wars’s debt to Japanese culture before, citing Akira Kurosawa’s 1958 period drama “The Hidden Fortress” as a primary inspiration for his first “Star Wars” film. There are also the kimono-like robes, lightsaber duels — kendo experts worked with the actors in the films — and the Force itself, with its elements of Buddhism and Shintoism.

For the series, the animators developed stories that exist outside of the franchise’s cinematic universe. “There are Sith villains and rabbit-girl hybrids, tea-sipping droids (OK, it’s really oil) and sake-sipping warriors,” Ito writes. “Lightsabers are lovingly squirreled away in traditional wrapping cloths called furoshiki and in red lacquer boxes.”

In “The Right to Sex,” Amia Srinivasan wants us to think more fully about sex, as a personal experience with social implications.

P.S. Priya Krishna, our food reporter, joined WNYC’s All Of It to discuss her article about the “ethnic” food aisle in American supermarkets.

The latest episode of “The Daily” is about the U.S.-British deal to sell military technology to Australia.

Sanam Yar wrote the Arts and Ideas section. You can reach Melina and the team at [email protected].