We’re covering the seafarers who live in limbo because of the coronavirus, what led to the Beirut explosion and how to stay safe on public transit. 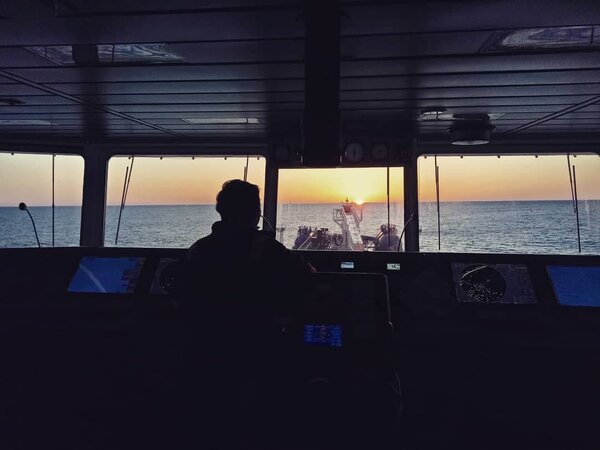 Trapped at sea in a pandemic

When many countries closed their borders as the coronavirus exploded early this year, hundreds of thousands of seafarers on ships around the world suddenly had no way home.

For cargo ships, the process known as crew change — in which seamen are replaced by new ones when their contracts expire — ground nearly to a halt.

Several months later, there’s no solution in sight. In June, the United Nations called the situation a “growing humanitarian and safety crisis.” Many in the shipping industry fear that the stress and exhaustion will lead to accidents, perhaps disastrous ones.

Some crew members have begun refusing to work, forcing ships to stay in port.

Details: Last month, the International Transport Workers’ Federation, a seafarers’ union, estimated that 300,000 of the 1.2 million crew members at sea were essentially stranded, working past the expiration of their original contracts and fighting isolation, uncertainty and fatigue.

France’s prime minister, Jean Castex, is self-isolating after the director of the Tour de France, whom he’d been in contact with, tested positive.

India plans to open classrooms for high school students on a voluntary basis, and only with their parents’ approval, starting Sept. 21. The vast majority will continue to study online.

U.S. colleges that have reopened for in-person instruction are struggling to contain the spread of the virus, and experts say policies have broken down in ways that may put students and staff at risk.

An early lockdown spared the Italian island of Sardinia in spring, but jet-setters — including the now-infected former prime minister Silvio Berlusconi — flocked there this summer, turning nightclubs into petri dishes and the island into a hot spot.

How a massive bomb came together in Beirut

Late last year, a new security officer at the port of Beirut peered inside a broken door and a hole in the wall of a storage hangar and made a frightening discovery.

Thousands of tons of ammonium nitrate, a compound used in explosives, was spilling from torn bags. There were also jugs of oil, kerosene and hydrochloric acid; five miles of fuse on wooden spools; and 15 tons of fireworks — in short, every ingredient needed to construct a devastating bomb.

He warned his supervisors. But, it turned out, lots of Lebanese officials already knew.

Months later, an explosion tore through Beirut. The blast killed more than 190 people, injured 6,000 and caused billions of dollars in damage.

A team of reporters tracked what led to the Aug. 4 explosion, conducting dozens of interviews with port, customs and security officials, shipping agents and other maritime trade professionals. They obtained previously undisclosed documents and exclusive photographs from inside the hangar. And they analyzed high-definition video.

Findings: Bribery and graft were commonplace at the port. Its operations are guided by a committee linked to Lebanon’s main political parties, enabling officials to use the port as a clearinghouse for illicit goods. The dysfunction allowed the dangerous materials to sit in the hangar for years.

President Trump acknowledged to the journalist Bob Woodward that he had knowingly played down the coronavirus earlier this year even though he was aware it was “deadly” and vastly more serious than the seasonal flu.

“This is deadly stuff,” Mr. Trump said on Feb. 7 in one of a series of interviews Mr. Woodward — a Pulitzer Prize-winner who has covered inside stories in Washington since the 1970s — conducted with the president for a book, “Rage,” due out on Sept. 15.

It was a vastly different story than Mr. Trump was telling the public. He claimed early on that the virus would disappear, predicting in February that “when it gets a little warmer, it miraculously goes away.”

“I wanted to always play it down,” Mr. Trump told Mr. Woodward on March 19. “I still like playing it down, because I don’t want to create a panic.”

Details: The Washington Post and CNN obtained the book, which is based partly on 18 on-the-record interviews between December 2019 and July 2020, before release. Both publications released recordings of interviews.

In other administration news: A whistle-blower filed a complaint alleging that top officials with the Department of Homeland Security directed agency analysts to downplay the threat of violent white supremacy and of Russian election interference.

If you have 5 minutes, this is worth it

While the major sports leagues in the U.S. and Europe are playing mostly before empty stands or cardboard cutouts, fans in Japan have been attending games since early July. But they’ve been asked to curb their enthusiasm to keep the coronavirus in check, and as with other containment measures in that country, most people have been complying.

Our Tokyo bureau chief went to an FC Tokyo soccer game and found the spectators to be scrupulously quiet — except for an occasional crinkle of a food wrapper or a spontaneous burst of applause.

Greece refugee camp fire: A fast-moving fire destroyed most of Europe’s largest refugee camp, on the Greek island of Lesbos, leaving most of its 12,000 residents homeless just days after they were collectively quarantined because of a coronavirus outbreak. No deaths were initially reported.

Australia shark attack: Despite protective “shark nets” and drumlines offshore, a 46-year-old surfer died in the first fatal shark attack in 62 years on Greenmount Beach on the Gold Coast.

Boeing: The U.S. aviation giant said Tuesday that it expected deliveries of its 787 Dreamliner to be delayed as it and the U.S. Federal Aviation Administration look into quality-control concerns with the wide-body jet. The plane’s relative fuel efficiency has made it popular with All Nippon Airways, United Airlines, Japan Airlines, American Airlines, Etihad Airways, Qatar Airways and Air Canada.

Snapshot: Above, a man in Indonesia lying in a coffin last week as punishment for violating mask rules. Coronavirus cases in the country have surged past 200,000. The novel penalty, inflicted on several people in East Jakarta, was halted after critics pointed out that onlookers were violating social distancing rules.

What we’re listening to: The ESPN podcast “Bloodlines.” Taffy Brodesser-Akner, a Times Magazine writer, says, “I lost the weekend listening to Wright Thompson’s excellent new podcast about the plague of horse deaths — 49 in just one year — at Santa Anita.”

Cook: This colorful tart loaded with zucchini and egg is easy thanks to store-bought puff pastry. Top with whatever fresh herbs you have on hand, like parsley, tarragon or dill.

Read: Learn about the history of money in a fast-paced, chatty new book by Jacob Goldstein, the host of the NPR podcast “Planet Money.”

Listen: Songs by Ava Max, Tricky, Bill Callahan and SZA are on our pop critics’ playlist this week.

We have more ideas on diversions and recipes in our At Home collection.

As traffic picks up again, on the streets and underground, The Times talked to experts for the best strategies to stay safe while commuting and making essential trips. Here’s some of their advice:

1. Choose your method wisely. Take into account how long you’ll be waiting for your chosen vessel to arrive and if the station is inside or outside. If you’re riding the bus, try to sit near a window, and keep it open. Opt for the escalator or stairs over the elevator, if you can.

2. Avoid touching communal surfaces. Wash your hands before you leave the house and again upon reaching your destination. And use sanitizer frequently.

Steer clear of subway poles and rails to the ferry deck or onto the bus. Don’t touch the turnstile as you move through it; stay away from touch screens, keypads and elevator buttons. Make contactless payments if they’re offered, and skip paper tickets.

3. Follow any new directions. Take note of the decals on the floor and signs you may see shepherding you through the station, an effort by some operators to reduce the number of people crossing paths and decrease crowding. If you’re boarding the bus, enter from the rear, to avoid shedding respiratory droplets on the driver and other passengers. And if you’re driving onto a ferry, remain in your car for the duration of your trip.

4. Don’t eat onboard. Eating can carry particles from a surface to your face. Besides, you’d have to take off your mask. Avoid extensive conversations, too; talking, and singing, sprays aerosolized droplets that can carry virus particles.

5. Be strategic about your timing. Try to avoid peak commuting hours. If your employer will allow for more flexible hours, you can circumvent, and not contribute to, the rush-hour crush.

Thank you
To Melissa Clark for the recipe, and to Theodore Kim and Jahaan Singh for the rest of the break from the news. You can reach the team at [email protected]

P.S.
• We’re listening to “The Daily.” Our latest episode is the first part of a series about what happened to Breonna Taylor, a young, Black medical worker killed in a police raid in Louisville, Ky.
• Here’s our Mini Crossword, and a clue: Improvise with other musicians (three letters). You can find all our puzzles here.
• Our National editor Marc Lacey spoke to Katie Couric about covering multiple crises at once as a racial reckoning in newsrooms is underway.