We’re covering the latest in vaccine passports, and hopes for aid in India’s coronavirus crisis. 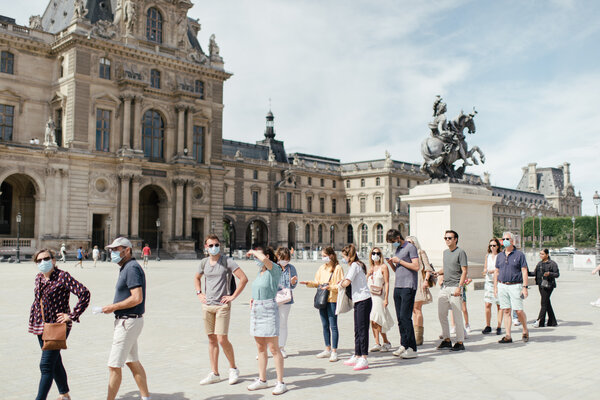 E.U. to allow some vaccinated tourists

American tourists who have been fully vaccinated against Covid-19 will be able to visit countries in the E.U. starting this summer, the head of the bloc’s executive body said in an interview with The Times.

The fast pace of vaccination in the U.S., and advanced talks between the authorities there and those in the E.U., will enable the European Commission to recommend a policy change that could restore trans-Atlantic leisure travel.

“All 27 member states will accept, unconditionally, all those who are vaccinated with vaccines that are approved by [the European Medical Agency],” said Ursula von der Leyen, president of the European Commission. That includes all three vaccines used in the U.S.

What to know: Ms. von der Leyen did not offer a timeline, but such a top-level statement is significant. Iceland, Greece and Croatia have already made moves to allow entry of summer tourists who are vaccinated.

Context: Diplomats from countries that rely on tourism have been arguing that using low case numbers as a threshold for travel is becoming obsolete because of the speed of vaccine campaigns in the U.S., Britain and other countries.

Take a look at the variety of digital and old-fashioned approaches being used around the world as proof of Covid-19 vaccinations.

The Philippines surpassed one million total coronavirus cases as it struggles with newer, deadlier forms of the virus.

With Navalny in jail, Russia cracks down on his movement

Prosecutors in President Vladimir Putin’s government ordered an immediate halt to all public activity by Aleksei Navalny’s political groups, one of the most drastic and direct actions against the opposition in recent memory.

The order prohibits Mr. Navalny’s nongovernmental organizations from posting information on the internet, calling for any public protests or organizing referendums. Previously, Mr. Navalny was targeted on pretexts, but the order issued on Monday directly prohibits what are usually seen as political activities. Officials said the activities were illegal because they were “extremist” in nature.

Details: Mr. Navalny’s foundation started 10 years ago and has since targeted high-ranking Russian officials with exposes on corruption, according to The Associated Press. Mr. Navalny also set up a network of political offices in dozens of Russian regions where he was campaigning against Mr. Putin.

Help on the way for India as crisis grows

As India set a global record for new virus cases for the fifth day in a row, the Biden administration said it had loosened a ban on the export of raw vaccine materials and said the U.S. would send therapeutics, test kits, ventilators and personal protective gear.

Saudi Arabia, Britain, France and Germany have also promised to send medical equipment. Google and Microsoft, public figures and members of the diaspora also raised money and pledged to help.

The aid can’t come soon enough, as the situation on the ground keeps spiraling. Vaccinating more people and restricting risky activities will be the strategy for curbing the spread of the virus, experts say.

The latest: Under intense pressure to address the crisis, the Biden administration said it intended to share up to 60 million doses of the AstraZeneca vaccine with other nations after a safety review.

Details: India’s health ministry reported almost 353,000 new cases and 2,812 deaths on Monday. It is recording more than a third of all new global cases each day, as the world’s seven-day average exceeds that of the last global peak in January.

Huawei’s lawyers are scheduled to appear in a New York court over accusations that the company helped its chief financial officer, Meng Wanzhou, fight extradition from Canada, where she has been on house arrest since 2018.

“Nomadland,” Chloé Zhao’s meditation on the damaged American dream, won Academy Awards for best picture, director and actress. Here is the list of winners and where to stream them, and the highlights from the night.

Born in Japan, the site Cookpad is a global success, becoming a go-to for recipe sharing around the world.

After Venezuela’s economic collapse, criminals and insurgents have seized on the nation’s undoing to establish mini-states of their own. Our reporters went to one of the regions under their control.

Jack Nicas talked to the OnTech newsletter about a feud between the two tech giants.

There is a new iPhone feature. What does it do, and why is Facebook so mad about it?

With the latest iPhone software update, companies and advertisers must ask explicit permission to track people from one app to another.

Many app companies, including Facebook, have predicted that large numbers of people will say no. And that means companies that rely on showing people online ads may have less data to fine tune the ads.

Facebook is right that billions of people have been able to access social networks, email, news and entertainment because it’s paid for by ads. The company’s message is that this system needs data on us to advertise effectively and efficiently. And Apple is right that digital advertising largely operates without people’s true consent or knowledge.

Taiwanese Meefun traditionally has dried shrimp, but this vegetarian rendition gets its umami from dried shiitake mushrooms.

The sole album by the overlooked jazz pianist Hasaan Ibn Ali, never released and long presumed destroyed, may renew his legacy after its release this week.

P.S. The Times is retiring the term Op-Ed. Here’s why.

The latest episode of “The Daily” is about why Russia is exporting so much vaccine.

You can reach Melina and the team at [email protected].