By Melina Delkic and Dani Blum

We’re covering how South Korea confronted fears around flu vaccines, what Biden will do in Taiwan and China’s mission to the moon. 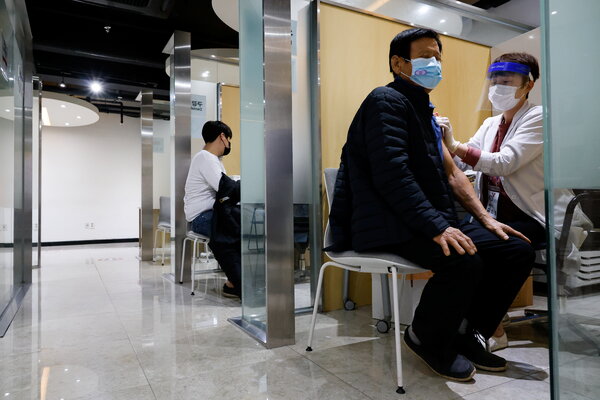 A game plan for the rollout of vaccines

As scientists dealing with Covid-19 worry about the rise of the anti-vaccine movement, South Korea’s response to fighting misinformation may offer the world a model for when vaccines become widely available.

In October, reports of deaths started popping up shortly after the country kicked off its flu vaccine campaign. Scientists determined that the deaths were unrelated to the flu shots, but they worried these accounts might lead to public distrust of vaccines altogether.

A response: Health officials ramped up efforts to communicate with the public. The government received more than 100 reports of people dying after receiving a flu vaccine. Officials promptly disclosed the causes, which were unrelated to the inoculations.

The panic has mostly died down in South Korea and 19 million people have received their flu shots so far. Still, this falls short of the country’s target of 30 million.

New research has convinced many scientists that an early mutation in the coronavirus made it more contagious and harder to contain. The mutation, known as 614G, was first spotted in eastern China in January and then spread through Europe and New York City, displacing other variants.

The makers of a Russian vaccine said that it showed an efficacy rate of 95 percent in preliminary results from a clinical trial. The figure was based on incomplete data.

Hong Kong ordered all bars and nightclubs to close starting on Thursday as coronavirus infections spike in the city. On Tuesday, Hong Kong reported 80 new cases, including 54 linked to dancers at a ballroom and Latin dance studio.

Australia’s largest airline, Qantas, will make coronavirus vaccines — once they become available — mandatory for all passengers who want to fly internationally. The head of Qantas predicted that other airlines will follow.

President-elect Joe Biden announced crucial cabinet picks on Tuesday as the presidential transition formally began in Washington. Along with the health and economic crises from the coronavirus pandemic, Mr. Biden faces major challenges in foreign policy.

In Asia, President Trump has bolstered ties with Taiwan as part of his efforts to counter China’s influence. Mr. Biden will most likely continue on a similar path.

But his approach is expected to be less confrontational than Mr. Trump’s — and he is viewed in Taiwan by some as more risk averse. Mr. Biden’s transition team has already reached out to Taiwanese officials.

The latest: The Trump administration is weighing several measures that could limit Americans looking to sell products to or invest in certain Chinese companies. Officials are also weighing sanctions related to crackdowns in Hong Kong and Xinjiang.

The police violently cleared out a temporary migrant camp in central Paris, forcing people out of tents, chasing them in the streets and firing tear gas. The crackdown fueled growing outrage over the government’s security policies.

Officers used riot shields, tear gas and dispersal grenades. The police regularly clear out people from such camps, but the violent evacuation of mostly Afghan migrants on Monday struck a nerve.

Anne Hidalgo, the mayor of Paris, expressed shock in a letter to the French interior minister, accusing the police of a “brutal and disproportionate use of force.” It came as Parliament voted on a bill on Tuesday that would make it harder for reporters or bystanders to film instances of police brutality.

If you have 9 minutes, this is worth it

The coronavirus pandemic has complicated a rite of passage for Korean adoptees sent to families overseas: reuniting with their birth parents. Many adoptees canceled long-planned pilgrimages back to South Korea after the government’s quarantine rules for foreign visitors made the trips too costly and time-consuming.

Some still found a way to make the trip. Above, Mallory Guy having dinner with her birth family in Cheonan, South Korea. The Times spoke to adoptees and birth parents about pandemic-era homecomings.

Qatar airport search: Prosecutors in Qatar charged airport police officers over an incident in which they strip searched women boarding a plane to Sydney, Australia, to look for the mother of a newborn found abandoned in an airport bathroom. The episode prompted outrage.

Islamic State foreigners: Lawyers representing Shamima Begum, a London schoolgirl who traveled to Syria in 2015 to join the Islamic State, on Tuesday called on Britain’s Supreme Court to allow her to return to her home country to mount her defense, saying the court should not assume she posed a serious threat.

BTS: The Korean pop band received a Grammy Award nomination in the best group performance category for the song “Dynamite.”

Snapshot: Above, the Chang’e-5 spacecraft launching from the Wenchang space site at Hainan Island in China’s south on Monday, on a course for the moon. China aims to be the first nation to bring back lunar rock and soil samples in more than four decades.

What we’re reading: The Economist’s package of articles explaining the power competition between China and the U.S. — and making a case for how the Biden administration should approach it. “It’s an excellent overview of one of the world’s most important stories,” says David Leonhardt, who writes The Morning.

Do: Pretend you’re in Hawaii. With a few easy-to-find items, you can discover Hawaii’s breathtaking biodiversity, wherever you are.

Read: It’s easy to forget, but for most of human history, the night sky was the best show around. These three new books invite you to stare up at the stars.

Let us help you discover something new. At Home has our full collection of ideas on what to read, cook, watch and do while staying safe at home.

Preliminary analysis of the vaccine produced by the British-Swedish drugmaker and the University of Oxford showed it was 90 percent effective when the first dose was cut in half. In contrast, the combination of two, full-dose shots led to just 62 percent efficacy. Our science reporters explain what’s behind those head-scratching results.

Why would that combination be more effective?

No one knows. The researchers speculated that the lower first dose did a better job of mimicking the experience of an infection, promoting a stronger immune response. But other factors, like the size and makeup of the groups that got different doses, may also be at play.

Why did the researchers test two different doses?

It was a lucky mistake. Researchers in Britain had been meaning to give volunteers the initial dose at full strength, but they made a miscalculation and accidentally gave it at half strength, Reuters reported. After discovering the error, the researchers gave each affected participant the full strength booster shot as planned about a month later.

Fewer than 2,800 volunteers got the half-strength initial dose, out of the more than 23,000 participants whose results were reported on Monday. That’s a pretty small number of participants on which to base the spectacular efficacy results — far fewer than in Pfizer’s and Moderna’s trials.

Thank you
Carole Landry helped write this briefing. Theodore Kim and Jahaan Singh provided the break from the news. You can reach the team at [email protected]

P.S.
• We’re listening to “The Daily.” Our latest episode is about President Trump’s failed attempt to overturn the election.
• Here’s our Mini Crossword, and a clue: Show on which Gillian Anderson plays Margaret Thatcher, with “The” (five letters). You can find all our puzzles here.
• Our Beijing reporter Sui-Lee Wee spoke to Nieman Storyboard about the challenges of sourcing and reporting in China.