Biden and Republicans Spar Over Unemployment as Job Gains Disappoint

WASHINGTON — The disappointing jobs report released Friday by the Labor Department is posing the greatest test yet of President Biden’s strategy to revive the economy, with business groups and Republicans warning that the president’s policies are causing a labor shortage and that his broader agenda risks stoking runaway inflation.

But the Biden administration showed no signs on Friday of changing course, with the president defending the more generous jobless benefits included in the $1.9 trillion bill he signed into law in March and saying the $4 trillion in spending he proposed for infrastructure, child care, education and other measures would help create more and better-paying jobs after the pandemic.

Speaking at the White House, Mr. Biden urged “perspective” on the report, which showed only 266,000 new jobs added in April. He said it would take time for his aid bill to fully reinvigorate the economy and hailed the more than 1.5 million jobs added since he took office. And he rejected what he called “loose talk that Americans just don’t want to work.”

“The data shows that more workers are looking for jobs,” he said, “and many can’t find them.”

Republicans cast the report as a sign of failure for Mr. Biden’s policies, even though job creation has accelerated since Mr. Biden replaced President Donald J. Trump in the White House. They called on his administration to end the $300 weekly unemployment supplement, while several Republican governors — including those in Arkansas, Montana and South Carolina — moved to end the benefit for unemployed people in their states, citing worker shortages.

“This is a stunning economic setback, and unequivocal proof that President Biden is sabotaging our jobs recovery with promises of higher taxes and regulation on local businesses that discourage hiring and drive jobs overseas,” Representative Kevin Brady of Texas, the top Republican on the Ways and Means Committee, said in a news release. “The White House is also in denial that many businesses — both small and large — can’t find the workers they need.”

Business groups like the U.S. Chamber of Commerce, which have backed pieces of Mr. Biden’s broad economic agenda, also suggested the aid was holding back hiring.

The jobs report “begins to confirm that this is a barrier — not the only barrier, but a barrier to filling open positions in the recovery,” said Neil Bradley, the chamber’s executive vice president and chief policy officer.

“We absolutely have to begin to make the preparation to turn the supplement off,” he said. “The sooner we do that, the sooner it’s going to become clear how this has been holding us back.”

The unemployment supplement has quickly become Republicans’ preferred weapon in attacking Mr. Biden’s economic stewardship, with lawmakers and conservative economists arguing that his heavy spending is having a negative effect on the recovery and will ultimately slow growth. While Democrats command narrow majorities in Congress, Republicans are trying to turn public sentiment against Mr. Biden’s approach and to stall plans to spend $4 trillion on policies that would be offset by higher taxes on corporations and the wealthy.

Republicans backed a $600 weekly supplement in the first stimulus bill approved under Mr. Trump, but they said the need for it no longer existed and that it was providing a disincentive to look for work. Economists who support that view pointed to details of the jobs report — including rapid wage gains in the hospitality sector — saying that suggested employers were rapidly raising pay to encourage new hires to accept jobs.

White House officials disputed that reading. Heather Boushey and Jared Bernstein, members of the White House Council of Economic Advisers, both pointed to a gain of 300,000 jobs in the leisure and hospitality sector and to a falling number of workers who told the department they had left the labor force out of concern over contracting the coronavirus as signs that the unemployment supplement was not deterring workers. Other officials noted that under the rules of unemployment benefits, workers could not turn down suitable job offers and still qualify for assistance.

Asked if he believed the enhanced benefits had any effect on the job gains, Mr. Biden replied, “No, nothing measurable.”

Administration officials say that any clogs in the labor market are likely to be temporary, and that the recovery will smooth out once more working-age Americans are fully vaccinated, schools and child care centers are fully open and people feel more comfortable going back to work.

“This is progress,” Ms. Boushey said in an interview. “We are adding an average of over 500,000 jobs a month” over the past three months, she said.

Administration officials expressed optimism that the pace of job gains would accelerate in the months ahead. Substantial portions of the relief money that was approved in March have yet flow into the economy. That includes the $350 billion that was allocated for states and municipalities, which have 1.3 million fewer jobs than their prepandemic peak.

States and cities are awaiting guidance on exactly how the money can be spent and what strings are attached. Republican-led states have filed a lawsuit against the Biden administration over its position that states cannot use relief money to subsidize tax cuts, which could further slow the rollout.

Mr. Biden said at the White House that the administration would begin releasing the first batch of money to state and local governments this month. He said the money would not restore all of the lost jobs in one month, “but you’re going to start seeing those jobs in state and local workers coming back.”

The administration also took steps on Friday to get money out the door more quickly, saying the Treasury Department would release $21.6 billion of rental assistance that was included in the pandemic relief legislation to provide additional support to millions of people who could be facing eviction in the coming months.

Officials said they expected increased vaccination rates to ease some lingering fears about returning to jobs in the pandemic. The number of Americans 18 to 64 who are fully vaccinated grew by 22 million from mid-April, when the survey for the jobs report was conducted, to Friday. That was an acceleration from the previous month. Some White House officials said the administration’s push to further increase the ranks of the vaccinated could be the most important policy variable for the economy this summer.

Treasury Secretary Janet L. Yellen, speaking at the White House, said that a lack of child care related to irregular school schedules was making it a challenge to get the labor market back to full strength. She also said that health concerns about the pandemic were holding back some workers who might return to the market.

“I don’t think that the addition to unemployment compensation is really the factor that’s making the difference,” Ms. Yellen said.

She said that she believed the labor market was healthier than the figures released on Friday suggested, but she allowed that the economic recovery would take time.

“We’ve had a very unusual hit to our economy,” Ms. Yellen said, “and the road back is going to be somewhat bumpy.” 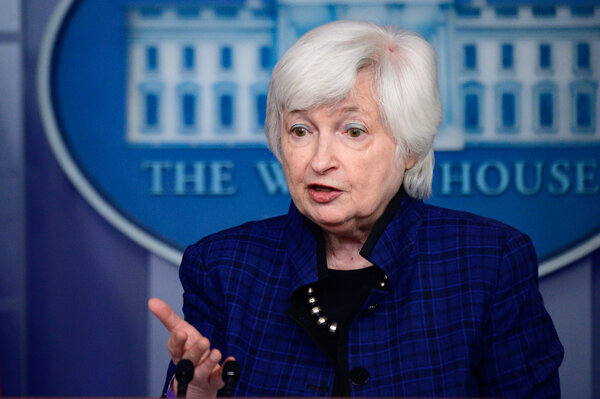 Ms. Boushey and Mr. Bernstein said that it appeared the economy was working through a variety of rapid changes related to the pandemic, including supply chain disruptions that have hurt automobile manufacturing by reducing the availability of semiconductor chips and businesses beginning to rehire after a year of depressed activity because of the virus.

“It’s our view that these misalignments and bottlenecks are transitory,” Mr. Bernstein said, “and they’re what you expect from an economy going from shutdown to reopening.”

Other key economic officials treated the report as a sign that the labor recovery ahead is likely to prove wildly unpredictable. Robert S. Kaplan, the president at the Federal Reserve Bank of Dallas, said in an interview that his economics team had warned him that the April report might show a significant slowdown as shortages of materials — including lumber and computer chips — and labor bit into employment growth.

He said he was hoping to see those supply bottlenecks cleared up, but he was watching carefully in case they did not resolve quickly.

“It shows me that getting the unemployment rate down and moving forward to improved employment to population is going to have fits and starts,” Mr. Kaplan said. He noted that sectors that were struggling to acquire materials, like manufacturing, shed jobs, and he said leisure and hospitality companies would have added more positions if not for challenges in finding labor.

“It’s just one jobs report,” cautioned Tom Barkin, the president of the Federal Reserve Bank of Richmond, in Virginia. But he said labor supply issues could be at play: Some people may have retired, others may have health concerns, and unemployment insurance could be encouraging low-paid workers to stay at home or allowing them to come back on their own terms.

“I get the feeling that people are being choosy,” Mr. Barkin said. “The first question I have in my mind is — is it temporary or is it more structural?”

He said that the supply constraints playing out were likely to fade over time, and that while businesses complain about rising input costs and might have to raise entry-level wages somewhat, he struggled to see that leading to much higher inflation — the kind that would worry the Fed.

The Fed is trying to achieve maximum employment and stable inflation around 2 percent on average. It has pledged to keep its cheap-money policies, which make borrowing inexpensive, in place until it sees realized progress toward those goals.

Neel Kashkari, the president of the Federal Reserve Bank of Minneapolis, said the payrolls disappointment vindicated the Fed’s slow-moving stance.

“I feel very good about our policy approach, which is outcome-based,” Mr. Kashkari said, speaking on a Bloomberg television interview shortly after the report came out. “Let’s actually allow the labor market to recover, let’s not just forecast that it’s going to recover.”