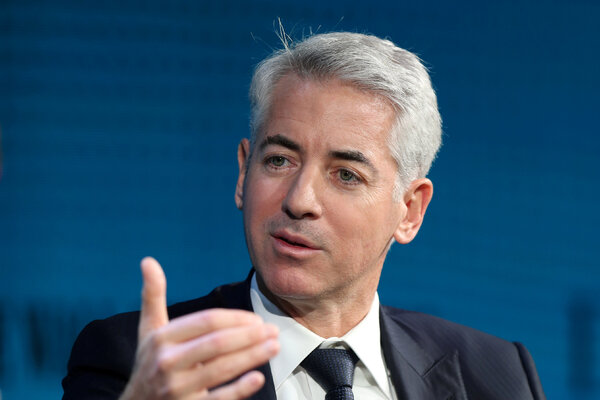 An existential question for SPACs

Pershing Square Tontine Holdings, the special purpose acquisition company run by the billionaire hedge-fund investor Bill Ackman, got sued this morning in a novel case that could have far-reaching implications for the SPAC industry.

The case, which is being argued by Robert Jackson, a former S.E.C. commissioner, and John Morley, a law professor at Yale, contends that Ackman’s SPAC isn’t an operating company, but is actually an investment company like Ackman’s funds, which should be regulated by the Investment Company Act of 1940. If certain SPACs were regulated as investment companies, much of the industry could be affected because it would make it harder for anyone in the investment business to participate in a SPAC.

SPACs are already under fire from regulators who have pledged to tighten protections for investors, and they face a rising number of class-action lawsuits by aggrieved shareholders. Around 600 SPACs have gone public over the past year and SPAC-linked merger deals worth more than $700 billion have been announced over that time. Securities law experts have raised questions about whether SPACs are used as a means to avoid the more onerous rules that apply to investment funds. The lawsuit highlights this increasingly common complaint.

To recap, a SPAC is a public shell company formed to acquire and operate a private company. This lets a private company go public with less scrutiny than a traditional I.P.O. Many SPACs are started by professional investors with investment businesses that contribute services to the SPAC, like Ackman and his hedge fund, Pershing Square Capital Management.

“Investing in securities is all the company has ever done since its I.P.O.,” the complaint says of Pershing Square’s SPAC. Simply buying some stock is not what a SPAC is meant to do, the lawsuit argues. Yet Ackman negotiated a stock deal between his SPAC and Universal Music Group. (He originally pursued a merger.) The arrangement was complicated, with the Pershing Square SPAC spending $4 billion to buy a 10 percent stake in the company, which was already being taken public by its parent, Vivendi. The S.E.C. questioned the terms, which raised concerns that Ackman’s SPAC was not a SPAC at all.

A moot point? Ackman abandoned the Universal Music deal last month, admitting in a letter to investors that he had underestimated regulatory and shareholder resistance to the complex transaction. But the new lawsuit asks the court to declare that Pershing Square’s SPAC is an investment company, and to find that it was deliberately mischaracterized to avoid legal requirements to the detriment of investors. The suit is also seeking to rescind contracts worth hundreds of millions of dollars to members of the company’s board.

If the suit succeeds, it could make professional investors who have found SPACs attractive wary of potential legal challenges, chilling the market. Proving damages will be difficult because the Universal Music deal was scrapped. But more important, perhaps, the case attempts to address underlying issues about the motivations of some SPAC sponsors. And its analysis of the meaning of investing in securities — part of any M.&A. deal — raises existential questions about the purpose and treatment of SPACs in general.

The irony is that Pershing Square’s SPAC was more investor-friendly than most. It was structured so that its sponsors would only be paid if its deal proved successful over time. Most other SPACs give sponsors shares and warrants that pay out regardless of the performance of the company after a merger.

Ackman declined a request for comment on the suit.

Economists fear that the Delta variant is slowing the economic recovery. They expect a drop in retail sales in July, especially for travel-related spending, in numbers released later today. Covid hospitalizations in some states are at a high, and the number of hospitals with nearly full I.C.U.s has doubled in recent weeks.

Covid booster shots for Americans may start next month. As caseloads surge, the Biden administration is likely to offer an additional vaccine dose to nursing-home residents, health care workers and emergency workers first, with the aim of boosters for most Americans eight months after a second dose.

Michael Burry is betting against Cathie Wood. Burry, the investor whose anticipation of the U.S. subprime crash was made famous by “The Big Short,” revealed an investment in put options on the Ark Innovation E.T.F.. Ark is run by Cathie Wood, a tech bull with a cult following whose fund soared on investments in Tesla and other high-flying assets but has seen choppier performance of late. Burry doesn’t understand the fundamentals of the “innovation space,” she said.

Women’s health gets its first unicorn

Maven Clinic, a women’s and family health care provider, will announce today that it has raised $110 million in funding at a valuation of more than $1 billion, making it the first U.S.-based company in the sector to achieve “unicorn” status.

Founded in 2014, Maven provides a single telehealth platform for fertility specialists, adoption coaches, doulas, lactation consultants, pediatricians, child care providers and others. The company does the bulk of its business as an employee benefits vendor for companies including Bumble, L’Oréal, Microsoft and Snap.

So far, Maven says it has worked with more than 10 million women and families, and it has grown rapidly during the pandemic: Since March last year its membership has soared by 400 percent.

Maven’s recent growth spurt was driven partly by an embrace of telemedicine, said Kate Ryder, the company’s founder and C.E.O. But companies are also increasingly focused on supporting and retaining employees with families, she said, especially since the pandemic has exposed weaknesses in child care systems and inequities in health care. “Covid accelerated all digital health companies forward,” Ryder said, and people are also now “starting to prioritize health equity, women’s health and family health.”

About 15 percent of in-person referrals through the platform are for child care support. Since March last year, about a quarter of the appointments scheduled were with mental health providers — an indication of the stresses and struggles of working parents. The financing will help Maven expand its coverage to include those on Medicaid, Ryder said.

Investors in this round include Dragoneer Investment Group, Lux Capital and Oprah Winfrey.

“It did not have to end this way. I am disgusted by the lack of any planning by Afghan leadership. Saw at airport them leave without informing others.”

— Ajmal Ahmady, the head of the central bank of Afghanistan, in a harrowing Twitter thread recounting his last few days in the country.

Yesterday, the federal government’s top auto-safety agency announced the broadest investigation yet into Tesla’s assisted-driving technology. Neal Boudette, who covers the auto industry for The Times, explains why fully self-driving cars, which not that long ago seemed to be just around the corner, now appear further away.

In 2016, Ford promised that it would be producing a car with no pedals and no steering wheel by 2021. Waymo, the autonomous car company owned by Google’s parent, Alphabet, has been testing a driverless ride service in the Phoenix area since 2017. And just two years ago, Elon Musk said that a million Tesla robo-taxis would soon roam the streets of American cities. Tesla even sells an upgrade right now called Full Self-Driving.

But none of these projects have gone as expected. Ford has shifted its strategy. Waymo is still testing but remains years from a large-scale commercial service. Tesla hasn’t produced a single autonomous car and has quietly acknowledged to California regulators that its Full Self Driving isn’t capable of full self-driving.

So what happened? Developing a car that can drive with no help from a human is far, far harder than the auto industry’s top experts once thought.

It’s one thing to use cameras, radar and computer chips to make a car that can stay in its lane and keep a safe distance on a highway. But it’s a vastly greater challenge to teach a computerized system to safely deal with intersections, cross traffic and construction zones, as well as drivers, pedestrians and cyclists who only sometimes follow the rules of the road.

Autonomous systems still struggle to recognize unforeseen dangers — a car suddenly changing lanes, or parked somewhere unexpected — and then choose a safe response. While driver error causes the majority of the nearly 40,000 roadway deaths that occur yearly in the U.S. each year, humans still cope better with surprises.

The risks of allowing cars to drive themselves can be seen in the fatal accidents that have come to light recently. In one 2019 crash, a Tesla operating with the company’s Autopilot system engaged came to an intersection and slammed into a parked car, killing a woman standing nearby. That accident occurred not because Autopilot isn’t capable of autonomous driving, but because Autopilot failed at the most basic function of any safety system. It simply failed to recognize an object and stop before hitting it.

Tim Hortons China, an arm of the Canadian coffee shop, is going public in a $1.7 billion SPAC deal. (Bloomberg)

Hachette has agreed to buy Workman, one of America’s largest independent publishers. (NYT)

The German publisher Axel Springer is reportedly in talks to buy a stake in Politico, deepening its partnership with the news site. (WSJ)

Monte dei Paschi di Siena, the world’s oldest bank, is preparing to be swallowed by UniCredit after performing poorly in a stress test. (NYT)

Janet Yellen will have another opportunity to reshape the Fed, this time from the outside, when Jay Powell’s term as chair expires in February. (NYT)

Best of the rest

The executive brought in to remake Twitter’s culture has clashed with workers over his blunt style. (NYT)

State Street, the firm behind the “Fearless Girl” statue outside the N.Y.S.E., is vacating its two New York City offices. (WSJ)

As African countries wait for doses they’ve ordered, Covid shots produced by Johnson & Johnson in South Africa are being exported to Europe. (NYT)

We’d like your feedback! Please email thoughts and suggestions to [email protected]