Canada Goose, the luxury jacket maker, has cultivated an image that is not only chic but also socially conscious. It has forged alliances with environmental advocates and talked of its commitment to high labor standards.

These efforts have paid off as the company outgrew its roots as a family enterprise and built a worldwide following for its parkas, which can cost over $1,000 and have been worn by celebrities like Daniel Craig and Kate Upton. “We believe that the brand image we have developed has significantly contributed to the success of our business,” the company wrote in a Securities and Exchange Commission filing in March.

But production employees of Canada Goose, who were all unionized as of 2010, have complained that the company has taken an increasingly hard line toward labor that is at odds with its stated values. 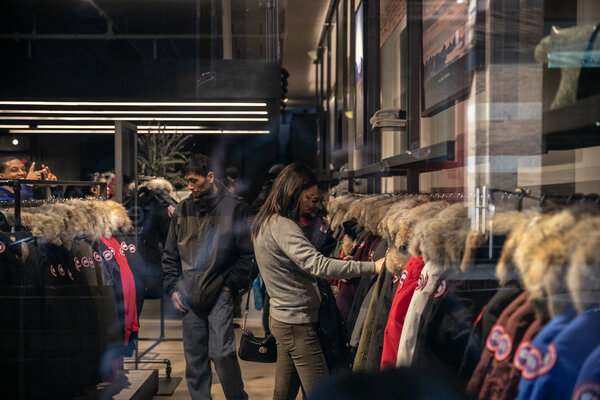 In 2019, a company official was cited by a provincial labor board for unfair labor practices during a union election at a newer facility, and some employees complain that the company has retaliated against them in recent months for supporting a union.

“People have fear,” said Alelie Sanvictores, a worker who has been active in union organizing. “Some people are scared to talk to me.”

Canada Goose denies that it is anti-union and that it has retaliated against union supporters. “It is the employees who will decide their path forward, and Canada Goose will support their decision,” the company said in a statement. The company dismissed the official cited for unfair labor practices.

On Wednesday, about two dozen labor activists picketed the Boston headquarters of Bain Capital, the private equity firm that owns and controls Canada Goose, hoping to pressure the jacket maker to endorse a union at three plants in Winnipeg.

The tensions at Canada Goose appear to illustrate the challenges of seeking rapid growth while maintaining a high-minded reputation that helps sustain a luxury business.

An immigrant named Sam Tick founded Canada Goose, then known as Metro Sportswear Ltd., in 1957. Its lone factory, in Toronto, unionized in the mid-1980s.

After Mr. Tick’s grandson Dani Reiss took over as chief executive in 2001, he sought to increase worldwide sales of what had largely been a North American operation. Still, he committed to making its parkas in Canada even as much of the country’s apparel industry was moving offshore.

“By keeping the majority of our production domestic, we contribute to local job growth and can more easily maintain our high manufacturing and labour standards,” the company wrote in its 2020 sustainability report.

But Mr. Reiss has seemed more skeptical of unions than his predecessors at Canada Goose. After the company bought a production facility in Winnipeg in 2011, the union sought a voluntary recognition or a neutrality agreement that would allow workers there to unionize easily.

“Dani Reiss said he wasn’t interested in doing that,” said Barry Fowlie, who for roughly a decade has directed the Canada Council of Workers United, the union that represents workers at the company.

A company spokeswoman said the union had never asked for voluntary recognition “in any official context.”

Bain Capital purchased a majority stake in Canada Goose in 2013 and listed it on the New York and Toronto stock exchanges in 2017.

Under Bain’s ownership, the number of unionized workers increased to over 1,000 just before the pandemic, thanks to growth at the original Toronto plant and the addition of two more facilities there. A collective bargaining agreement that predated the new sites makes all Toronto-based production workers part of the union.

Workers at the Winnipeg plants say many of them make the province’s minimum wage, which is about 12 Canadian dollars per hour (around $9.65), though workers can earn more if they exceed certain production targets. The company said nearly 70 percent of workers were making more than the minimum wage.

In interviews, five workers complained that managers were often abusive toward the largely immigrant work force.

One worker, Immanuelle Concepcion, said her supervisor flew into a rage over mistakes in some jackets she appeared to have worked on. “She told me, ‘How dare you allow this to happen? How dare you?’” Ms. Concepcion recalled. “I was shaking. I haven’t experienced humiliation that way.”

The Canada Goose spokeswoman said that the company had gotten no reports of “frequent abuse” and that all reports of harassment were investigated.

In June, the company disciplined two workers at one of its Winnipeg plants shortly after they had identified themselves as union supporters. One said he had routinely been wearing headphones while working, but was warned and then written up for it — on two consecutive days — only after he came to work wearing a union T-shirt.

Until then, said the worker, Trevor Sinclair, “my supervisor never said anything about it.”

Nearly 30 percent of Canadian workers are union members, compared with about 11 percent of American workers. Mr. Sinclair said he felt that Canada Goose was essentially importing an American model of fighting unions.

“The way they treat us is not how Canadians treat each other,” he said. “Management doesn’t really understand what Canada is about.”