Home » Business » Coronavirus: Debenhams moves to protect itself from creditors

Coronavirus: Debenhams moves to protect itself from creditors

Debenhams has filed a notice of intent to appoint administrators as it moves to shield itself from creditors amid the coronavirus crisis.

Sky News reported on Friday how the company’s owners remained confident in its future, despite the shutdown of its 142 stores because of social distancing restrictions, though the chain was exposed on a number of fronts including rent bills.

The chief problem was the threat of suppliers of stock – inventory worth hundreds of millions of pounds that is currently not needed – chasing the company to pay its bills on time.

The retailer said on Monday: “This move will protect Debenhams from the threat of legal action that could have the effect of pushing the business into liquidation while its 142 UK stores remain closed in line with the government’s current advice regarding the COVID-19 pandemic.

“The group is making preparations to resume trading its stores once government restrictions are lifted.”

The vast majority of its 22,000 staff were already furloughed, with 80% of employees’ wages covered for at least three months by the government’s Coronavirus Job Retention Scheme.

The future for those jobs is under renewed strain. 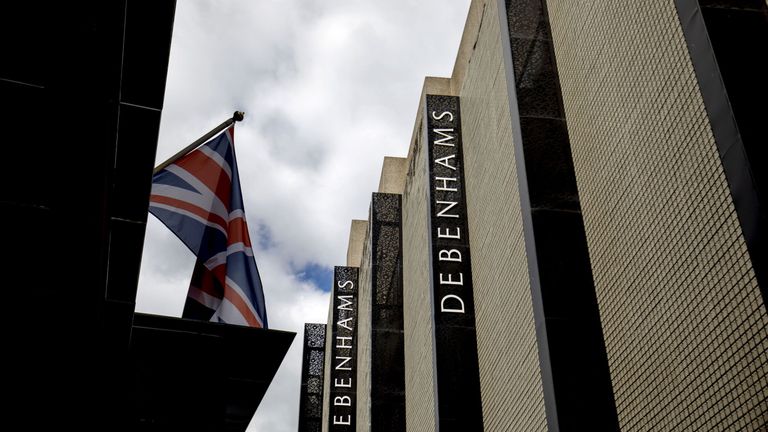 That is because by placing the chain in administration its owners, which include the American hedge funds Silver Point Capital and GoldenTree Asset Management, would plan to buy Debenhams back again debt free through a so-called pre-pack deal that could potentially include plans to shed further loss-making operations.

There were 28 stores previously earmarked for closure following the post-Brexit slowdown in trade that savaged the high street before the COVID-19 outbreak.

Debenhams confirmed on Monday it continued to trade online across the UK, Ireland and Denmark.

It said customer orders, gift cards and returns were also being accepted and processed normally.

The looming administration represents another chapter in a chequered recent history for Debenhams.

It is unclear whether Mr Ashley, who is in the process of trying to sell Newcastle United FC, has any appetite to try to acquire Debenhams again.