The government is facing calls to introduce price controls on essential items sold online after eBay and Amazon were accused of failing to stop profiteering during the coronavirus pandemic.

Consumer group Which? said the two companies were “failing to prevent some unscrupulous sellers” posting items on their sites despite removing hundreds of thousands of rogue listings.

Prime Minister Boris Johnson warned last month that racketeers “exploiting people’s need” during the COVID-19 crisis would not be tolerated. But Which? said it had found hundreds more products – including handwash, cleaning products and baby formula – being offered to customers on Amazon and eBay at hugely inflated prices.

New listings included two 600ml bottles of Carex handwash priced at £40, and a bottle of Dettol cleaner being sold for £59.99 – 24 times the normal price.

It comes after Sky News found a box of baby formula, usually priced at around £11, being sold on eBay for £310 last month.

Researchers for Which? said they had also discovered a “worrying trend” of what appeared to be listings previously removed by Amazon back on the site with inflated prices.

The consumer group said it was now time for the government to step in with emergency legislation to cap prices on essential products to stop the practice from continuing.

Sue Davies, Which? head of consumer protection, said Amazon and eBay “seem unable to stop coronavirus profiteering” which had left “some unscrupulous sellers to have a field day exploiting people by selling essential items at appallingly high prices”.

She said: “It is time for the government, working with the Competition and Markets Authority (CMA), to step in with strong action to stamp out price gouging and keep the price of vital goods reasonable during this difficult time.” 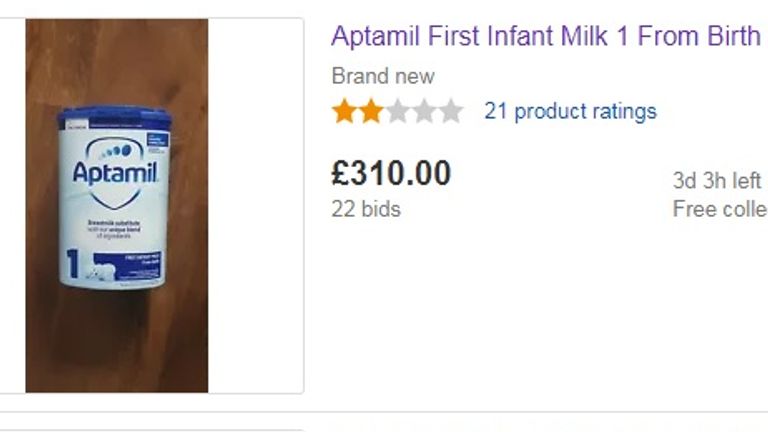 In response, eBay said it had “extremely effective measures” in place to combat “price gouging” – when a seller increases the prices of goods to a level much higher than is considered reasonable or fair.

The company said it had “heavy restrictions on the listing of some in-demand products at unreasonable prices” which had resulted in “five million automatically blocked attempts to price gouge, an additional 600,000 removed, and thousands of seller accounts suspended”.

Amazon said there was “no place for price gouging” on its site, adding: “We are disappointed that bad actors are attempting to artificially raise prices on basic need products during a global health crisis and, in line with our long-standing policy, have recently blocked or removed hundreds of thousands of offers.

“We continue to actively monitor our store and remove offers that violate our policies.”