When Christian Dior brought its B27 footwear to the world in the fall, the company decided that not just any old sneaker drop would do. To drum up awareness and excitement, the fashion house went to Snap Inc. in a tech partnership that would pour accelerant on the occasion.

One of the first brands to take up Snap’s business profiles when it made its debut last year as a closed beta test, the maison worked with the developer to create augmented reality experiences, so consumers could virtually try on the shoes.

Christian Dior Couture released a realistic Snapchat Lens that allowed people to try on six pairs of B27 sneakers through AR. It then promoted the experience through the Snapchat Lenses Carousel and the Snap Ads to AR Lens format, with videos showing runway models and users playing with the Lens and encouraging users to try it. Interested users could buy the shoes directly from there.

The strategy worked: According to Dior, the Lens and Snapchat advertisements alone nearly quadrupled the brand’s return on ad spend at 3.8x, and promoting the experience in the platform’s Lenses Carousel saw return rocketing up to 6.2x.

It also leveraged its business profile, effectively turning its home on Snapchat into a digital showroom, complete with virtual try-ons, at the product’s launch. This move alone generated more than 2.3 million views of its AR Lens. 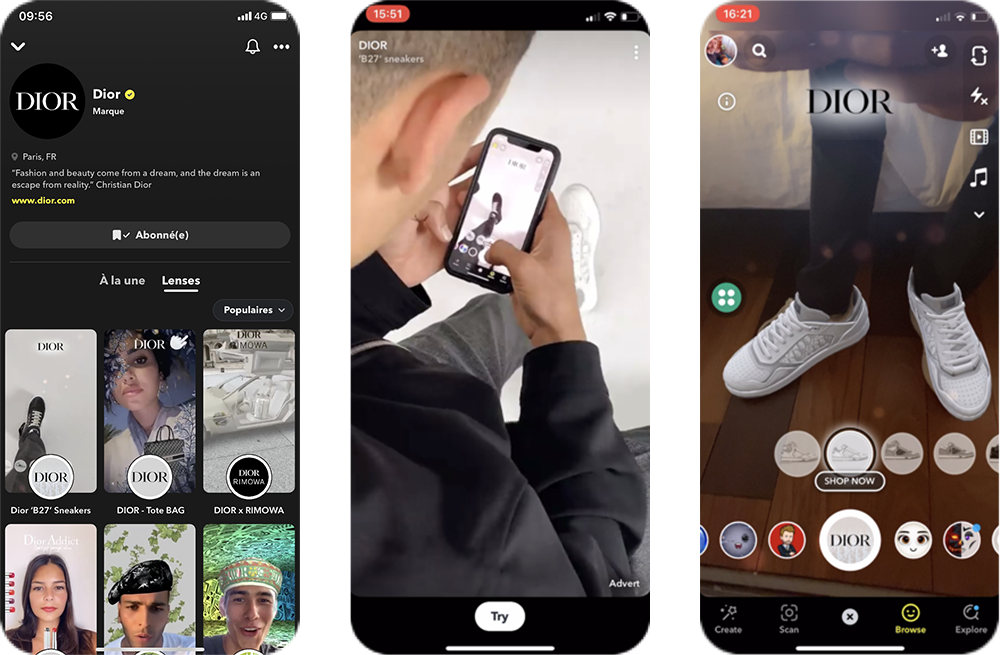 Dior created an AR Lens so users can try on the B27 and promoted it in ads and on its business profile. Courtesy image

“The campaign was very unique, as it was the first time ever that a brand was using their business profile to generate early excitement as soon as their new sneakers were released,” Geoffrey Perez, Snapchat’s head of luxury, explained to WWD. “On top of that, Christian Dior Couture made this activation as a one-of-its-kind by bringing the Snap exclusive try-on feature to a diverse mix of touch points, such as their websites and social media channels.”

The brand considers its Snapchat campaign as one of its most successful activations to date.

“Dior’s creative DNA is transposed in the digital space,” a Dior spokesperson said. “Having revolutionized fashion, the house is now pioneering the digital customer experience given the increasing need, particularly in the context of the COVID-19 pandemic, to stay connected with our audience.”

Dior has always been interested in AR, the person added, given Gen Z’s preference for mobile shopping and the ease of purchase in these platforms. Indeed, it has been dabbling with AR for quite some time, including initiatives for its Rimowa luggage capsule collection in 2019 and its holiday packaging over the last holiday season, which went out over Facebook, Instagram and Snapchat.

But during an era when people can’t physically check out items prior to purchase, interactive technology has proven to be even more helpful. With AR, “customers get to familiarize themselves with products while also respecting health guidelines,” Dior added.

This is likely why more luxury brands are pursuing the technology.

Historically legacy brands and luxury houses have been as skeptical of emerging tech as fashion fads, unwilling to gamble their prestige on fly-by-night trends that may zoom in and right back out. But now, many more — including Gucci, Chanel, Burberry, Yoox Net-a-porter, Michael Kors, Ba&sh and others — have stepped through the virtual looking glass, in no small part due to the pandemic.

On Snapchat, more than 200 million daily active users engaged with AR every day on average in the fourth quarter of last year.

In other words, augmented reality can hardly be considered a fringe or emerging technology anymore and luxury appears to have gotten the memo.

“We have noticed a growing interest for AR and, more specifically, AR shopping across all luxury brands, and the pandemic has only accelerated that trend,” Perez said.

Snap’s partnerships for AR span maisons like Dior and Gucci, beauty brands like Maybelline and NYX Professional Makeup and other fashion brands, such as Ralph Lauren. The tech company worked with the Polo brand on a variety of projects, from a Bitmoji digital wardrobe and a virtual pony to a hybrid physical and virtual store experience that allows shoppers to visit and shop Ralph Lauren stores, from New York to Hong Kong.

The challenge in front of luxury brands is to understand augmented reality as a creative canvas, as well as a business tool to reach younger audiences.

“Luxury brands build and extend a legacy. To do this, they need to be where their audience is, and if they don’t speak to them right away, they run the risk of losing them permanently,” Perez warned. At stake are the all-important Millennial and Gen Z shoppers, which he referred to respectively as their “current and future consumers.”

Naturally, Perez sees his platform as the essential place to reach them, “and considering that visual communication is at the heart of ‘Snapchat’s Generation,’ they need to talk to them now.”