Extreme poverty is set to rise this year for the first time in more than two decades, with coronavirus expected to push up to 115 million people into that category, the World Bank has said.

The pandemic is compounding the forces of conflict and climate change, which were already slowing poverty reduction, the bank said.

The projected increase would be the first since 1998, when the Asian financial crisis shook the global economy.

Before the pandemic struck, the extreme poverty rate was expected to drop to 7.9% in 2020.

But now it is likely to affect between 9.1% and 9.4% of the world’s population this year, according to the bank’s biennial Poverty and Shared Prosperity Report. 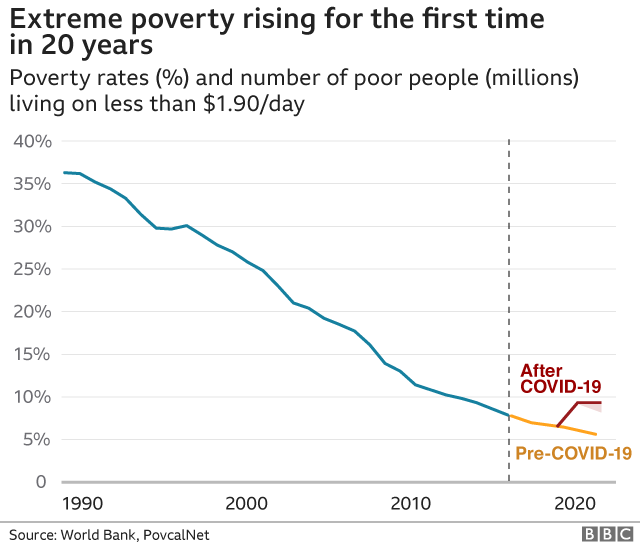 At the other end of the scale, billionaires have seen their fortunes hit record highs during the pandemic, with top executives from technology and industry earning the most.

However, it now says that goal will be beyond reach without “swift, significant and substantial policy action”.

The World Bank report found that many of the new poor would be in countries that already have high poverty rates, with 82% of the total expected in what are classed as middle-income countries.

The bank said progress in reducing global poverty was already slowing even before the Covid-19 crisis.

Between 2015 and 2017, 52 million people rose out of poverty, but the rate of reduction over that period was less than half a percentage point a year.

This was less rapid than in the years between 1990 and 2015, when global poverty had dropped at the rate of about one percentage point a year.

“The pandemic and global recession may cause over 1.4% of the world’s population to fall into extreme poverty,” said World Bank Group president David Malpass.

He said that to reverse this “serious setback”, countries would need to prepare for a different economy post-Covid, by allowing capital, labour, skills and innovation to move into new businesses and sectors.

However, he pledged that World Bank support would be available to developing countries “as they work toward a sustainable and inclusive recovery”.

The Washington-based lender is offering grants and low-interest loans worth $160bn to help more than 100 poorer countries tackle the crisis.