In January of last year, as the Iowa caucuses neared and before I’d heard of Covid-19, I asked Andrew Yang if running for mayor of New York wouldn’t make more sense than his improbable presidential campaign.

“After eight years as president, we’ll see if I have an appetite for mayor,” he replied.

I found him surprisingly impressive and hard to dismiss, and wrote a column saying the news media should take his presidential bid more seriously.

Then I went to a caucus in West Des Moines, where the only Yang supporter I found was a teenager who had been dragged to the event by her Elizabeth Warren-supporting mother, and was lodging a familial protest vote. Still, I reminded him of the exchange when we spoke on Friday. “It turns out I never became president!” he said brightly. “And I’m full of energy.”

This time, the media is taking him seriously — and indeed, is trying, with mixed results, to avoid some of what journalists see as the mistakes in covering Donald Trump.

Those post-mortems were endless: In 2016, the media covered an outsider, celebrity candidate by a different set of standards, and simultaneously allowed him to suck all the energy out of the race.

In New York in 2021, even a depleted local press corps has covered Mr. Yang skeptically, each outlet in its own way. The Daily News put his “rabid” and “unruly” supporters on its front page. The New York Post roasted his eagerness to hire his rivals to actually run the city. Politico documented his courtship of conservative media. And this weekend, Brian Rosenthal and Katie Glueck of The New York Times exposed a wide gap between the promise and reality of the nonprofit he founded. Now, aides to other candidates said, he has become the central target as they scramble to take him down in the six weeks that remain before the primary election.

Still, the local media is wrestling with how to avoid allowing coverage of one candidate to eclipse the rest of the field, even if Mr. Yang is “not in the same ideological universe as Donald Trump,” said Jere Hester, the editor in chief of the nonprofit news organization The City.

“There’s a residual wariness among the media about being careful not to uncritically help elevate someone who’s more celebrity than proven public servant,” he said.

The rise of Mr. Yang, like an optimistic helium balloon, has been disconcerting to the denizens of New York’s once-savage media-political scene. The New York mayoralty used to be one of the great prizes in American politics, won by candidates tough enough to survive the second-fiercest press corps in the country, after the White House. But local news here, as everywhere, has been in decline for years, and Michael Bloomberg’s billions showed that a candidate could sidestep the historically hostile gaggle of reporters and reach city voters through expensive television ads instead. Mayor Bill de Blasio, too, has brushed off fierce and unrelenting opposition from The Post, which despite being still lively and well-funded, has lost some of its killing power.

And while the coverage of Mr. Yang has been mixed, there is no question he is dominating, getting about twice as much written coverage as his nearest rival, according to the magazine City Limits, and regularly leading broadcast news outlets.

“I’m excited because it means I’m contending,” Mr. Yang said in a Zoom interview on Friday. “When I ran for president, we were the scrappy underdog, so most of the coverage was like, ‘What’s going on here? Who is this?’ So I’ll take it. Generally speaking being covered is a good thing.” 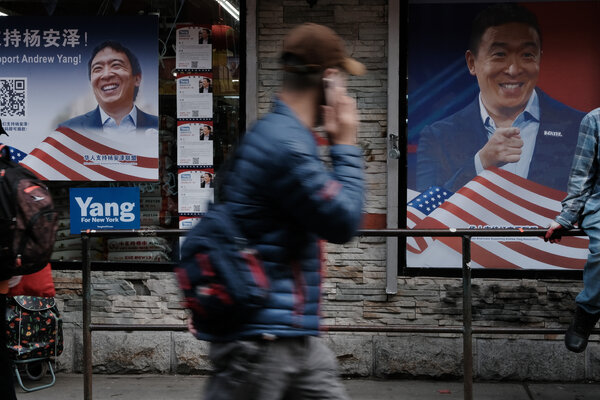 The next month will determine whether he’s right, and whether he can continue to float through a campaign that, in this strange moment near the end of a pandemic, has been oddly muffled, lacking the kind of crescendo of the media echo chamber that demolished more experienced candidates before him.

Mr. Yang’s good cheer and good vibes — at a cultural moment when vibes, as The New Yorker’s Kyle Chayka wrote recently, are standing in for more concrete judgment — may be what some weary voters crave now. His breeziness certainly stands out among the more sober candidacies of his rivals, like the Brooklyn borough president, Eric Adams, who has campaigned against gun violence, and the former de Blasio aide Maya Wiley, who is promising to take on the hard challenges of changing the city’s police and schools, while her aides rage at Mr. Yang’s airy ascent.

Another candidate who was trying to offer a solid and steady alternative to Mr. Yang, Comptroller Scott Stringer, faltered last week as his key supporters abandoned him after a lobbyist said Mr. Stringer sexually assaulted her 20 years ago. That accusation, which he denies, ricocheted through the media and political world despite a lack of journalistic corroboration.

The one constant in this strange campaign has been the directness of Mr. Yang’s approach. When I saw him outside the Mermaid Inn in the East Village last Wednesday, he was holding a news conference to demand, in part, that the state drop the Covid-era requirement that bars serve snacks with drinks. It was the sort of populist issue that draws broadcast cameras, and a smaller version of his willingness to press the city’s powerful teachers’ union on reopening schools. It hit the note of post-pandemic optimism his opponents have struggled to strike. An aide noted with satisfaction that two of the three main local networks were there.

“The media has a bias toward celebrity and novelty and energy,” said U.S. Representative Ritchie Torres of the Bronx, who has endorsed Mr. Yang.

The candidate’s version of Trumpian provocation is a series of Twitter controversies over mildly misguided enthusiasm for bodegas and subways. “The Daily Show” last week launched a parody Twitter account featuring a wide-eyed Mr. Yang excitedly declaring gems like “Real New Yorkers want to get back to Times Square.”