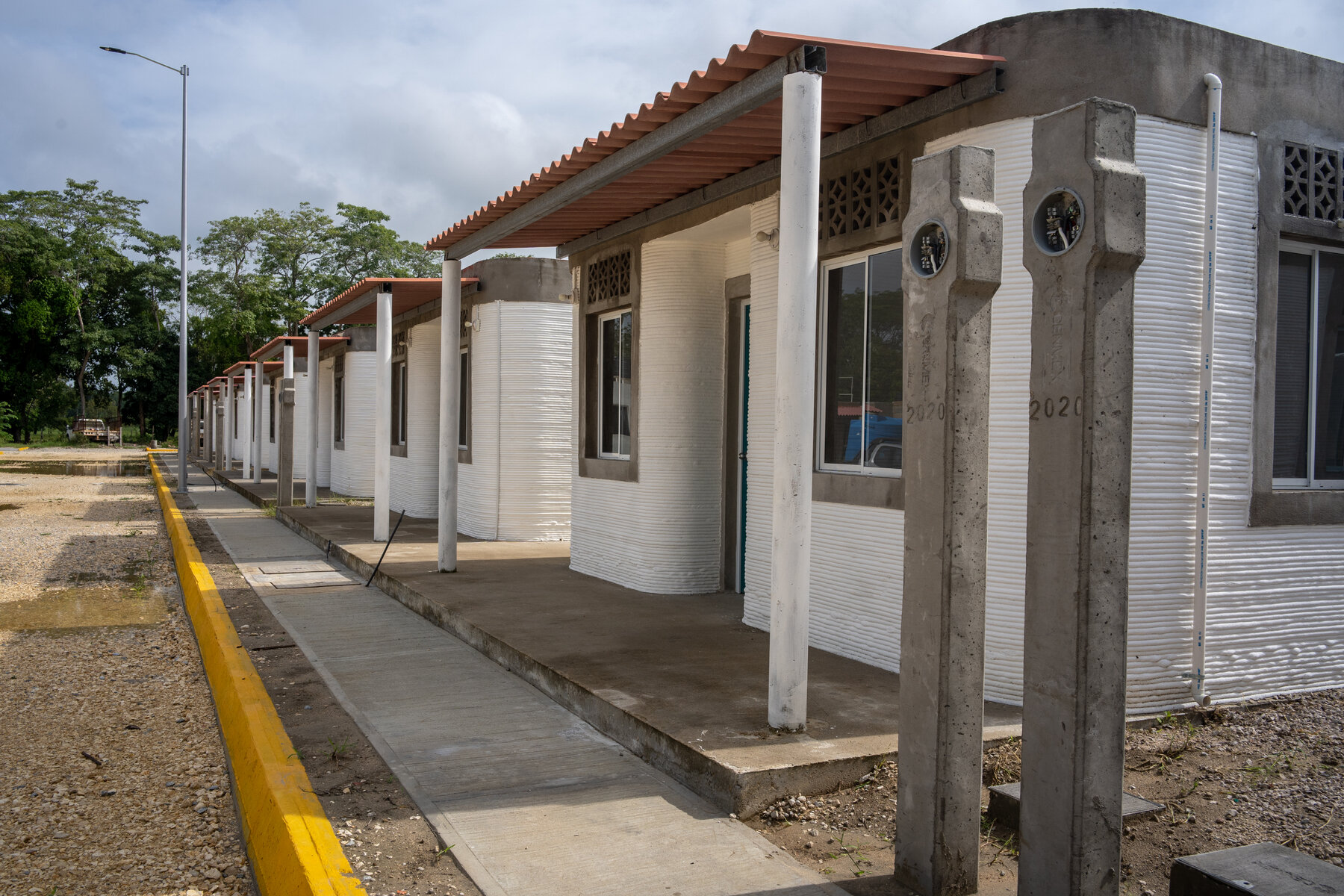 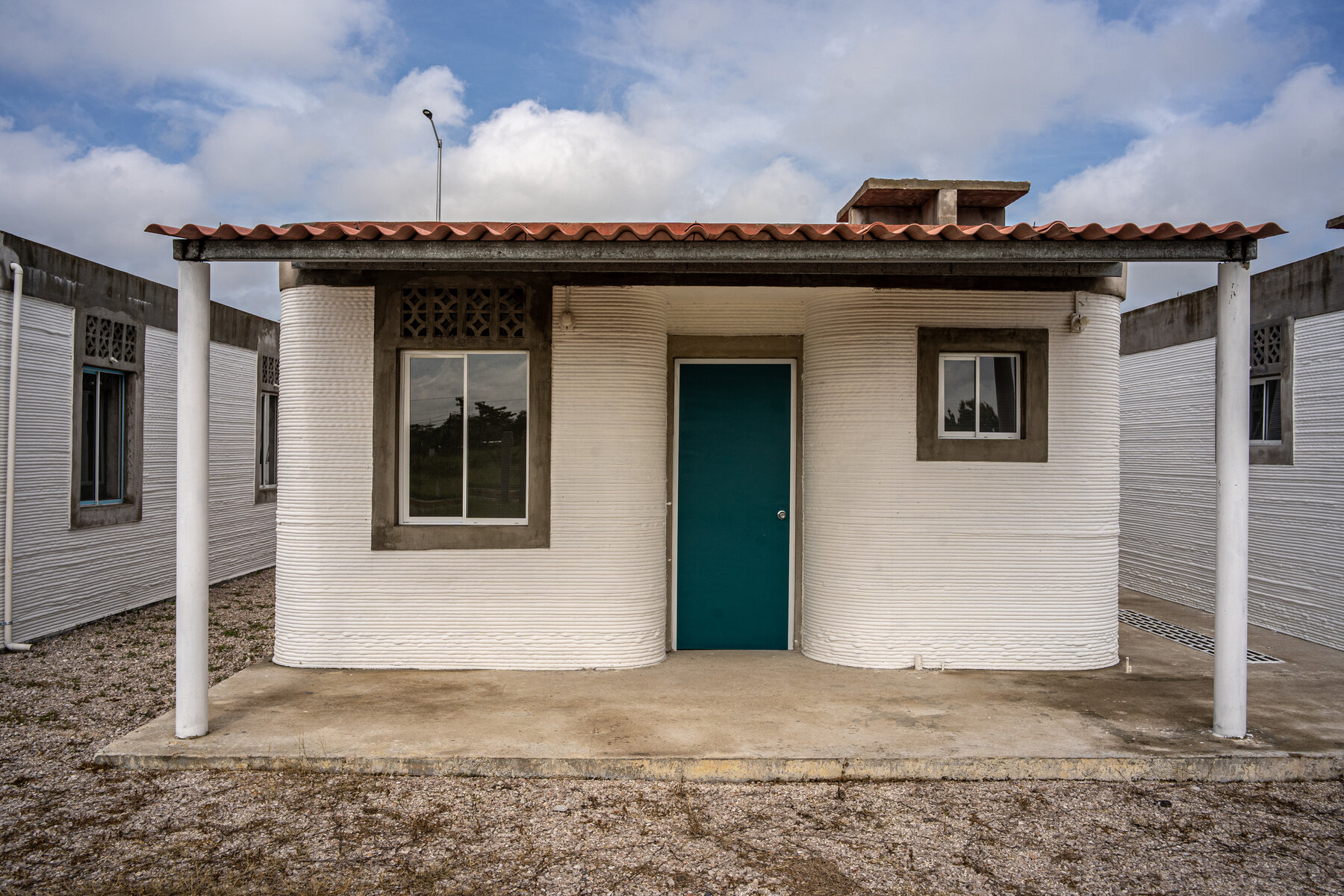 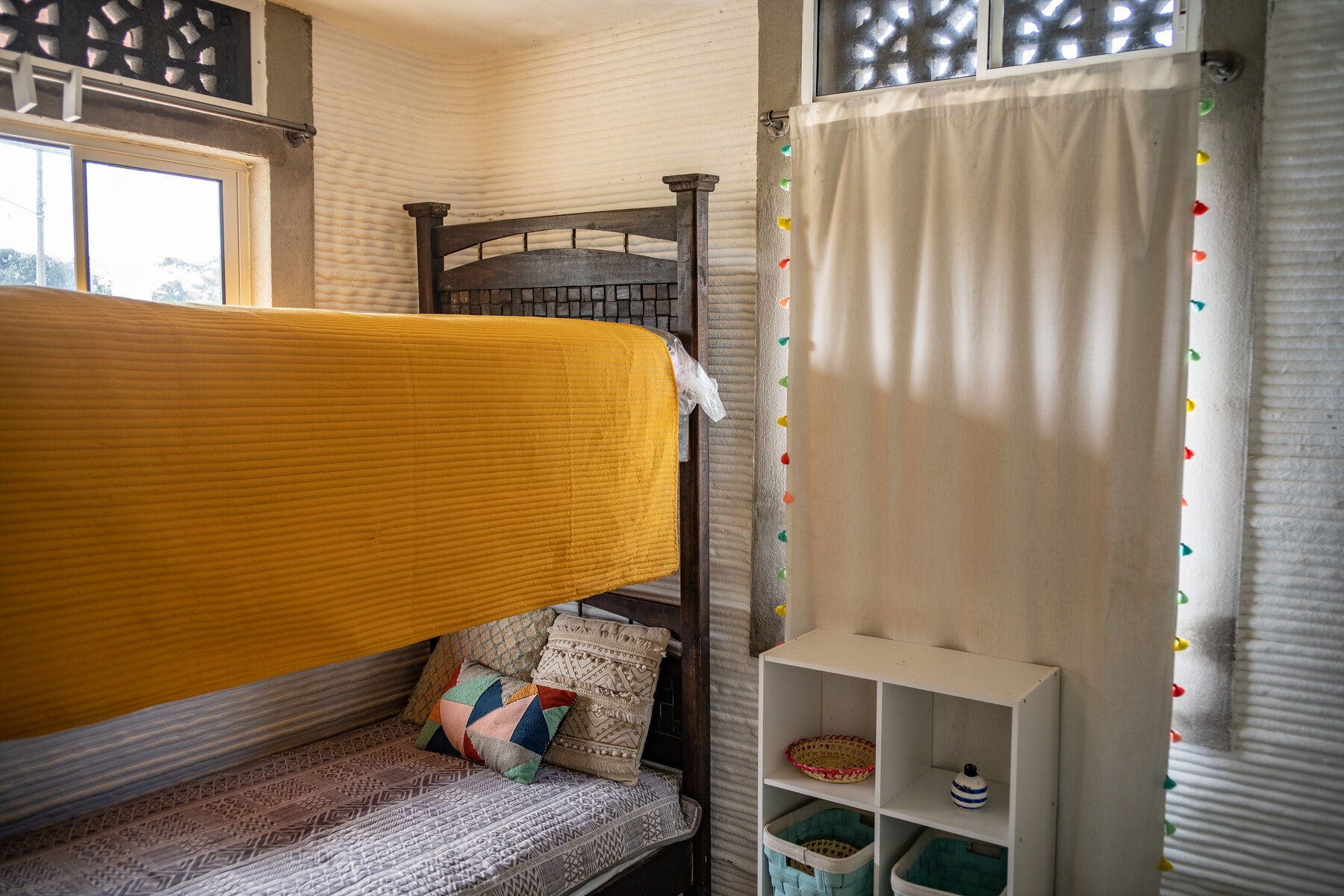 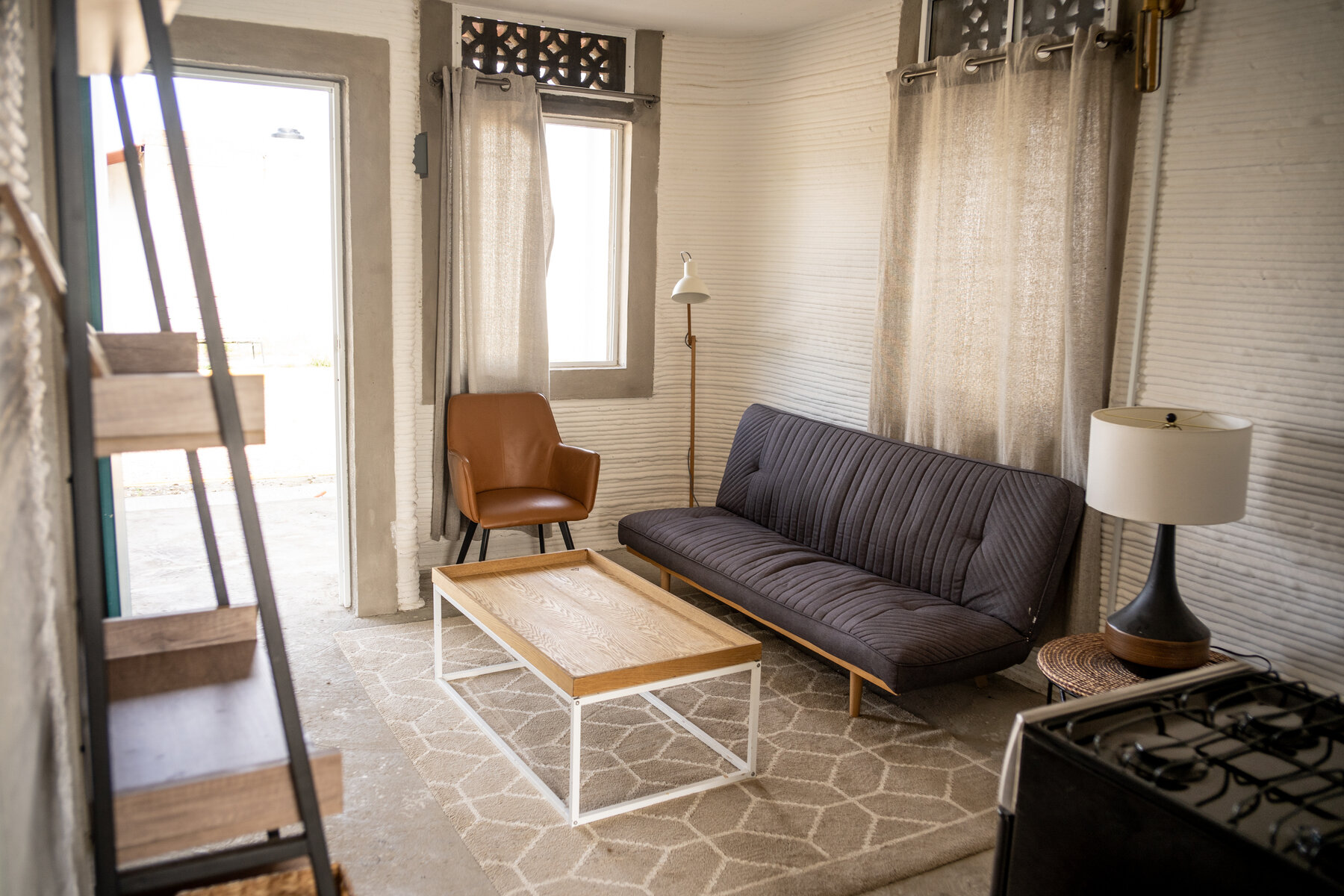 In a tiny village on the outskirts of Nacajuca, Mexico, builders are creating new homes using a novel tool: an oversize 3-D printer.

To build the homes, the printer pours layers of lavacrete, a proprietary concrete mix, one after another in long swirls. One home can be completed in less than 24 hours.

The homes can nonetheless tolerate extreme conditions and have already withstood a magnitude 7.4 earthquake.

Investors are watching to see whether 3-D housing can become a model for building elsewhere.

Three-dimensional printing can create nearly any object. A partnership in Mexico is putting that theory to the test, building a village for residents living in poverty.

Pedro García Hernández, 48, is a carpenter in the southeastern Mexican state of Tabasco, a rainforest-shrouded region of the country where about half of the residents live below the poverty line.

He ekes out a living making about 2,500 pesos ($125.17) a month from a tiny workspace inside the home he shares with his wife, Patrona, and their daughter, Yareli. The home has dirt floors, and during Tabasco’s long rainy season, it’s prone to flooding. Dust from his construction projects coats nearly everything in the home, clinging to the bedroom walls, the pump toilet and the counters of his makeshift kitchen.

But that will soon change. In a matter of months, Mr. Hernández and his family are moving to a new home on the outskirts of Nacajuca, Mexico: a sleek, 500-square-foot building with two bedrooms, a finished kitchen and bath, and indoor plumbing. What’s most unusual about the home is that it was made with an 11-foot-tall three-dimensional printer. 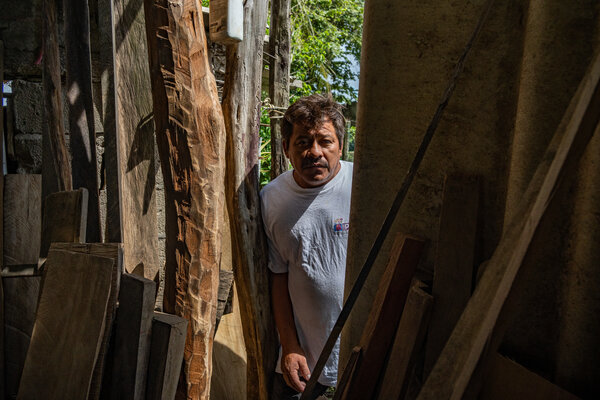 A manufacturing process that builds objects layer by layer from a digital file, 3-D printing is set for explosive growth. After a pandemic-related boom from printing objects like test swabs, protective gear and respirator parts, the 3-D printing market is forecast to be worth $55.8 billion by 2027, according to Smithers, a technology consulting firm.

Nearly any object can be printed in 3-D; in construction, it uses concrete, foam and polymers to produce full-scale buildings. The real estate industry is warming to the trend: The construction firm SQ4D listed a 3-D printed house in Riverhead, N.Y., this year for $299,000. It was billed as the first 3-D printed home for sale in the United States, but it was predated by similar projects in France, Germany and the Netherlands.

And now, the era of the 3-D printed community has arrived. Mr. Hernández’s home is one of 500 being built by New Story, a San Francisco nonprofit organization focused on providing housing solutions to communities in extreme poverty, in partnership with Échale, a social housing production company in Mexico, and Icon, a construction technology company in Austin, Texas.

When New Story broke ground on the village in 2019, it was called the world’s first community of 3-D printed homes. Two years and a pandemic later, 200 homes are either under construction or have been completed, 10 of which were printed on site by Icon’s Vulcan II printer. Plans for roads, a soccer field, a school, a market and a library are in the works.

Single-family homes are a good testing ground for the durability of 3-D printed construction because they are small and offer a repetitive design process without much height, said Henry D’Esposito, who leads construction research at JLL, a commercial real estate firm. They can also be constructed to tolerate natural disasters: Nacajuca sits in a seismic zone, and the homes there have already withstood a magnitude 7.4 earthquake.

The technology is promising, but some investors remain wary, and they’re watching the emergence of 3-D housing clusters closely.

In March, Palari Homes and the construction company Mighty Buildings announced a $15 million planned community of more than a dozen 3-D printed homes in Rancho Mirage, Calif. The community has a waiting list of more than 1,000.

The same month, Icon announced it had teamed up with the developer 3Strands and DEN Property Group on four 3-D printed homes in Austin, priced at $450,000 to $795,000. Icon has also printed homes in the Community First Village in Austin, a project of the nonprofit organization Mobile Loaves & Fishes that provides permanent housing to homeless men and women.

The 3-D printing market grew 21 percent last year, and Hubs, a manufacturing platform, projects that it will double in size over the next five years.

“It really is a very effective and efficient way to build a small segment of properties, but it’s not something that applies across the broader commercial real estate ecosystem,” Mr. D’Esposito said. “We don’t know exactly how these buildings will perform over decades or what the long-term value retention will be for them. So if you’re talking to an investor or lender, that’s a big yellow flag.”

In Nacajuca, building a home with Icon’s Vulcan II printer looks much like a massive soft-serve ice cream cone: Layers of lavacrete, the company’s proprietary concrete mix, are poured one after another in long swirls. The printer is controlled by a tablet or smartphone, requires as few as three workers and can complete a home in less than 24 hours.

“We know that being able to build more quickly, without sacrificing quality, is something that we have to make huge leaps on if we’re going to even make a dent on the issue of housing in our lifetime,” said Brett Hagler, New Story’s chief executive and one of four founders.

The organization was started in 2015, shortly after Mr. Hagler took a trip to Haiti and saw families still living in tents years after the 2010 earthquake there. Across the globe, 1.6 billion people live with inadequate housing, according to Habitat for Humanity.

“We’re really looking at the biggest opportunities to have both impact and efficiency gains,” said Alexandria Lafci, one of the New Story founders. “There is a very significant gain in speed that you get with 3-D printing, without sacrificing quality.”

Speed is only one factor in bringing a village to completion — New Story has teamed up with local officials in Tabasco to bring sewage services, electricity and water to the community.

Mr. Hernández, who has plans to expand his construction business to a larger space in his new home, said he was not focused on a move-in date. He cares about the long-term impact the home will have for his daughter, who is studying to become a nurse.

“When we receive the house, my daughter will be able to rely on it,” he said. “She won’t have to worry anymore.”

Échale, which has been operating in Mexico for 24 years, helped New Story select residents for the new homes based on need. It decided to sign the titles of each home not to a whole family but to the woman of the house.

“It’s to protect the family,” said Francesco Piazzesi, Échale’s chief executive. “A man will sell a house if they need to. A woman will do whatever she needs to do to save the house for her children and her family.”

Échale hires local workers to build their own communities, so plopping a 3-D printer from an American tech company into the heart of a rural village was a shift.

“If you came to Nacajuca when the 3-D printer was there, you would see machinery that looked like a RoboCop movie,” Mr. Piazzesi said. “It’s creating opportunities for the people because something gets into the community and it lasts.”

Icon has delivered more than two dozen 3-D-printed homes across the United States and Mexico. Its coming projects run the gamut from social housing to disaster relief housing to market-rate real estate. A project is also in the works with NASA to develop space-based construction systems that it hopes will eventually serve as habitats on both the moon and Mars.

When Icon was founded, its biggest hurdle was convincing skeptics, said Jason Ballard, one of Icon’s founders and its chief executive.

“I had builders and developers explaining to me how it’s not possible to get concrete to do that, even as I walked them up to our 3-D printed house,” he said. “Now our biggest challenge is we’ve just got to make more printers.”