Home » Business » How Will Web 3.0 Transform the Industry?

How Will Web 3.0 Transform the Industry?

LONDON — For the average consumer, using cryptocurrency to buy a digital fashion item that will live exclusively on a screen seems like an out-of-reach scenario — for now.

It might even sound a little ludicrous to those who still don’t get what cryptocurrency — or the blockchain technology that enables it — is all about. But buying premium fashion and fine jewelry online, without seeing or trying the product on, seemed equally far-fetched a decade ago and now e-commerce has become a mainstream method of consumption.

Just like e-commerce, the trend toward virtual purchasing and owning is gaining ground.

Marjorie Hernandez, cofounder of the blockchain network Lukso, believes “the dematerialization of consumption is a real thing.” Last year, Lukso raised $18 million in funding, and Hernandez thinks the network, which is specifically geared toward fashion and lifestyle businesses, can transform the industry’s power dynamics.

Lukso, she said, can use blockchain technology to help authenticate both real-life and digital products, store multiple layers of data and give brands and individuals the opportunity to own their data.

Its capabilities have already persuaded Eric Pfrunder, the former Chanel image director, that blockchain will be integral to fashion’s future.

Pfrunder has joined the start-up’s advisory board and is working with the Lukso team to register the Karl Lagerfeld photographic archive he inherited upon the designer’s passing, using blockchain technology. 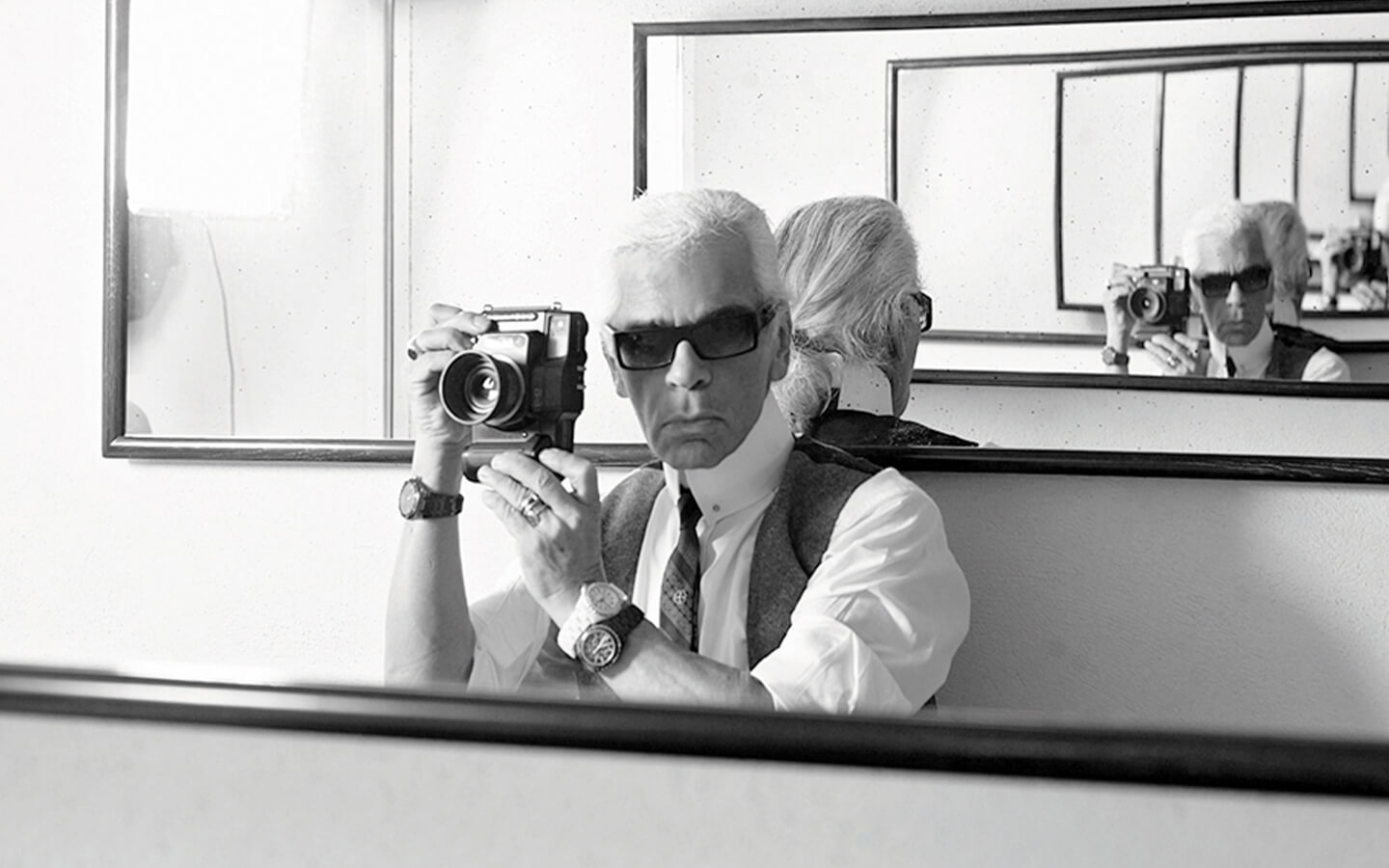 “This entails registering all of the photography, storing all of the data, all the details of the photoshoots that Mr. Pfrunder remembers, the anecdotes. When we register an image on the blockchain, it creates an identity for each picture, and all of a sudden each of these identities are computer programs that can store all sorts of information. That data is then incorruptible, it will be there forever because blockchain networks are very resilient,” Hernandez said. 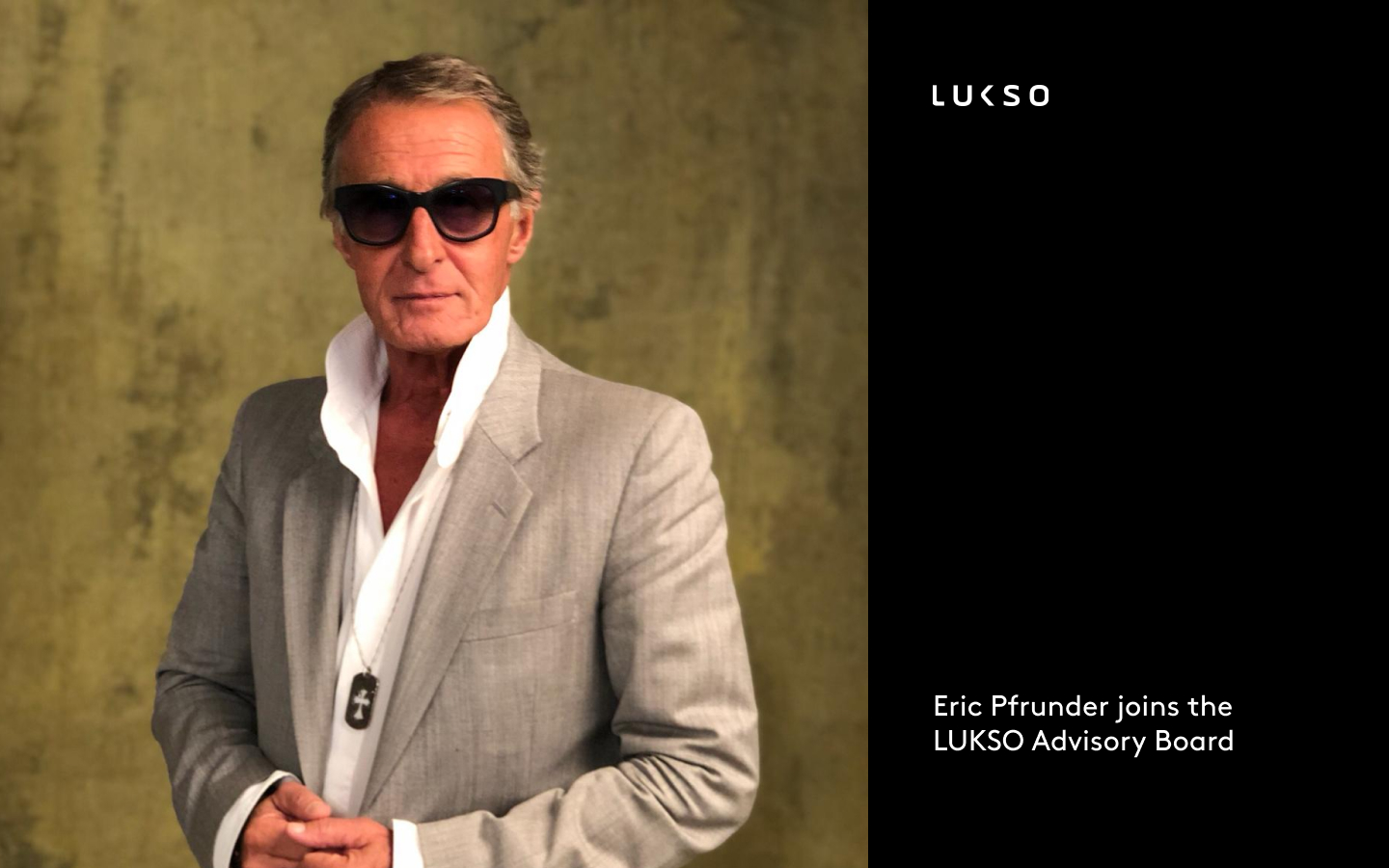 She believes blockchain technology offers a big storytelling opportunity, and the ability to capture the memories and back stories attached to each image that only Pfrunder knows, and would otherwise be lost.

“We’re taking the work of one of the most prolific minds of the last 100 years, Karl Lagerfeld, and his number-one collaborator and creating an immutable record on the blockchain. This will allow Mr. Pfrunder to auction certain pieces in the future, or send them to museums. The beautiful thing is that we can keep recording all the data from the future, too,” said Hernandez, adding that Pfrunder’s vote of confidence in the project is a clear sign that the worlds of fashion and technology are about to come a lot closer.

“If somebody said 10 years ago that the image director of Chanel would be involved in a crypto project, people would’ve thought that was impossible and crazy. But what’s happening right now is that we are slowly getting to the point where the value of the crypto position is becoming clearer, and the technology is becoming more accessible. It’s just a matter of time until we have the kind of tools that will enable people to make transactions, without even thinking about what blockchain is,” she added, likening the development of this type of technology to the arrival of the internet in the ’90s.

In the same way that blockchain can be used to store the data of a photograph, it can also store data that will help authenticate a luxury handbag, be it real or digital. Once products are registered on the blockchain network, users will be able to trade their different assets.

“You can trade a Karl Lagerfeld photo against a Chanel handbag or Off-White sneakers versus your digital fashion dress. It’s a completely different product experience, but all of a sudden they’re tradable against each other because they speak the same language, they exist in the same currency. This can create a new market that more women can engage with. Trading markets have been very male dominated to date and we think this will be a gateway to get more women to engage in this kind of economic activities,” Hernandez said.

The appetite for these transactions is already visible and the pandemic has only served to make it stronger. According to Hernandez, having fewer occasions to wear real-life clothes has meant that people are getting used to building digital lives and personas “to stay sane” and entertained.

The creative industries — be it fashion, art or design — play a key role in embellishing these digital lives. Last month, Christie’s sold a digital collage for $69.4 million in its first auction offering digital-only artwork. Overnight, the artist behind the work, named Beeple, became “one of the top three most valuable living artists,” according to the auction house.

Lukso is also working toward debuting a digital wallet-cum-wardrobe that will enable users to store all their digital assets within one safe space. 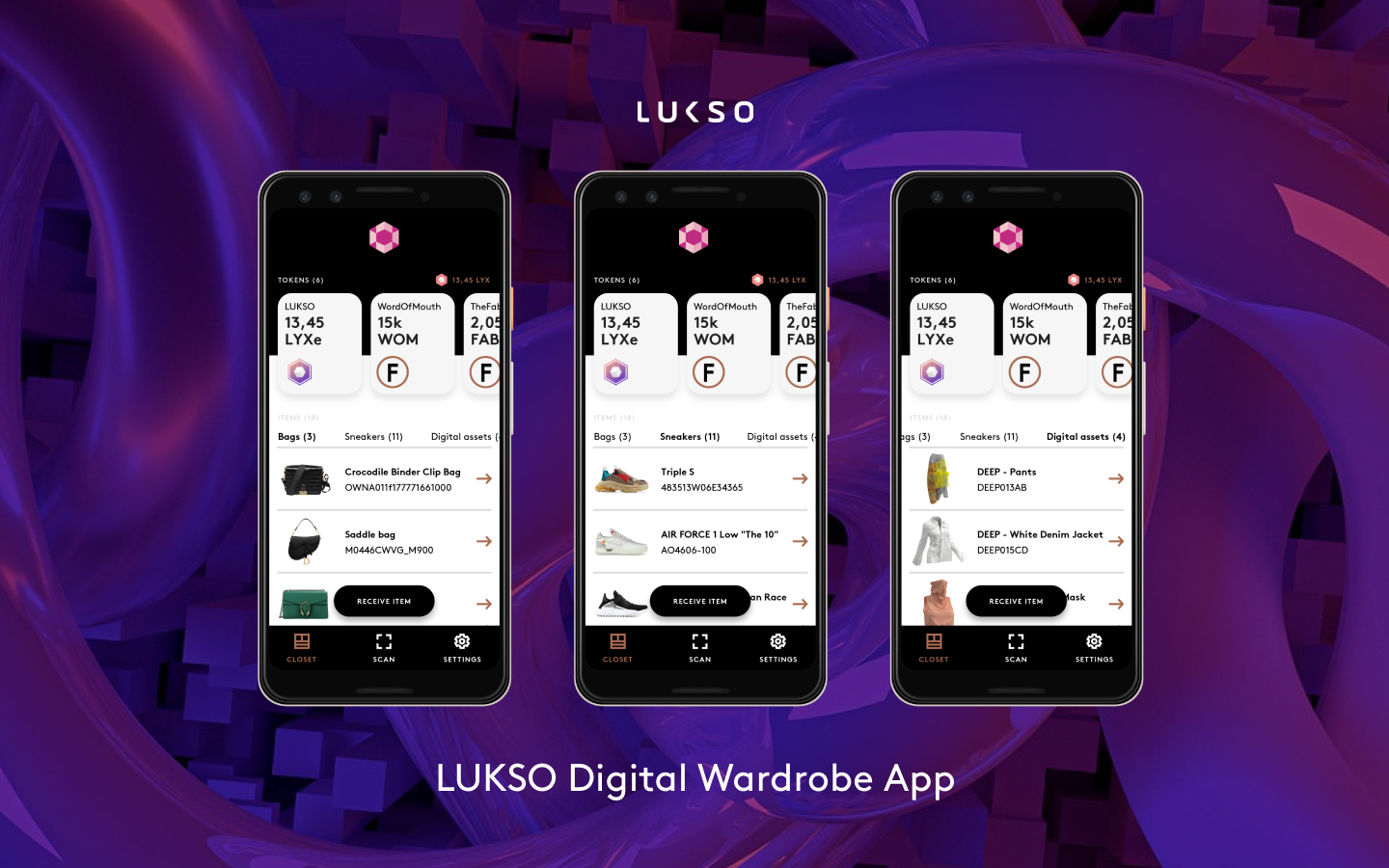 Hernandez is readying the launch of a digital fashion marketplace as well, dubbed The Dematerialised, which aims to open the digital fashion arena to the regular fashion consumer, and make transactions as seamless as possible. The platform — which is in beta  — will accept all currencies, not just cryptocurrency, and is focused on developing the kind of purchasing experience luxury consumers expect.

Once they’ve made a purchase, consumers can collect the items and dress avatars in them during gaming. Going forward, people will also be able to wear those items on digitized versions of themselves — a technology that Lukso and other developers, including Snapchat, are exploring.

“We need blockchain to ensure legal ownership of digital goods, but the problem with owning blockchain products is that you need to be a bit of a geek: You need to have some crypto in order to pay, you need to know how to manage wallets; there is a bit of a barrier there. At The Dematerialised, we focused on removing those barriers and accepting any type of payment,” said Hernandez, who is confident that fashion consumers will follow in the footsteps of gamers and cryptocurrency natives.

To test the waters, Hernandez opened The Dematerialised to an audience during a Crypto Fashion Week talk. She said 30,000 people flocked to the site and 1,000 digital sweaters were sold out within 24 hours. The majority of the consumers involved members of the crypto community and gamers, but 30 percent consisted of fashion consumers paying with regular currencies.

The fast conversions of regular consumers means that brands need to start paying attention. Once The Dematerialised launches, the ultimate goal is to start onboarding brands to the marketplace, supporting them in the process of turning their real-life designs into 3D digital ones, and transforming them into digital manufacturers.

One could easily imagine designers at Paris’ top ateliers scratching their heads at the mere sound of digital manufacturing, but there have been some early adopters of the technology.

“COVID-19 forced us to show entirely digitally last season, so I saw it as a perfect opportunity to experiment with the conceptual possibilities of a fashion show,” Lee said.

“The digital space is a vast, open terrain where the rules of the game are still being organized and optimized, and communities are still forming — some people compare it to the Wild West. I think it has the potential to influence everything in our lives, especially fashion,” the designer added.

She gave an example: “People go online to find their identities these days just how I went into a vintage store to find the perfect dress that would represent who I am, as a teenager. Fashion will naturally move into this space,” said Lee, adding that she was impressed by the openness of the NFT (non-fungible token) community and its focus in shaping a new, more responsible model of consumption. 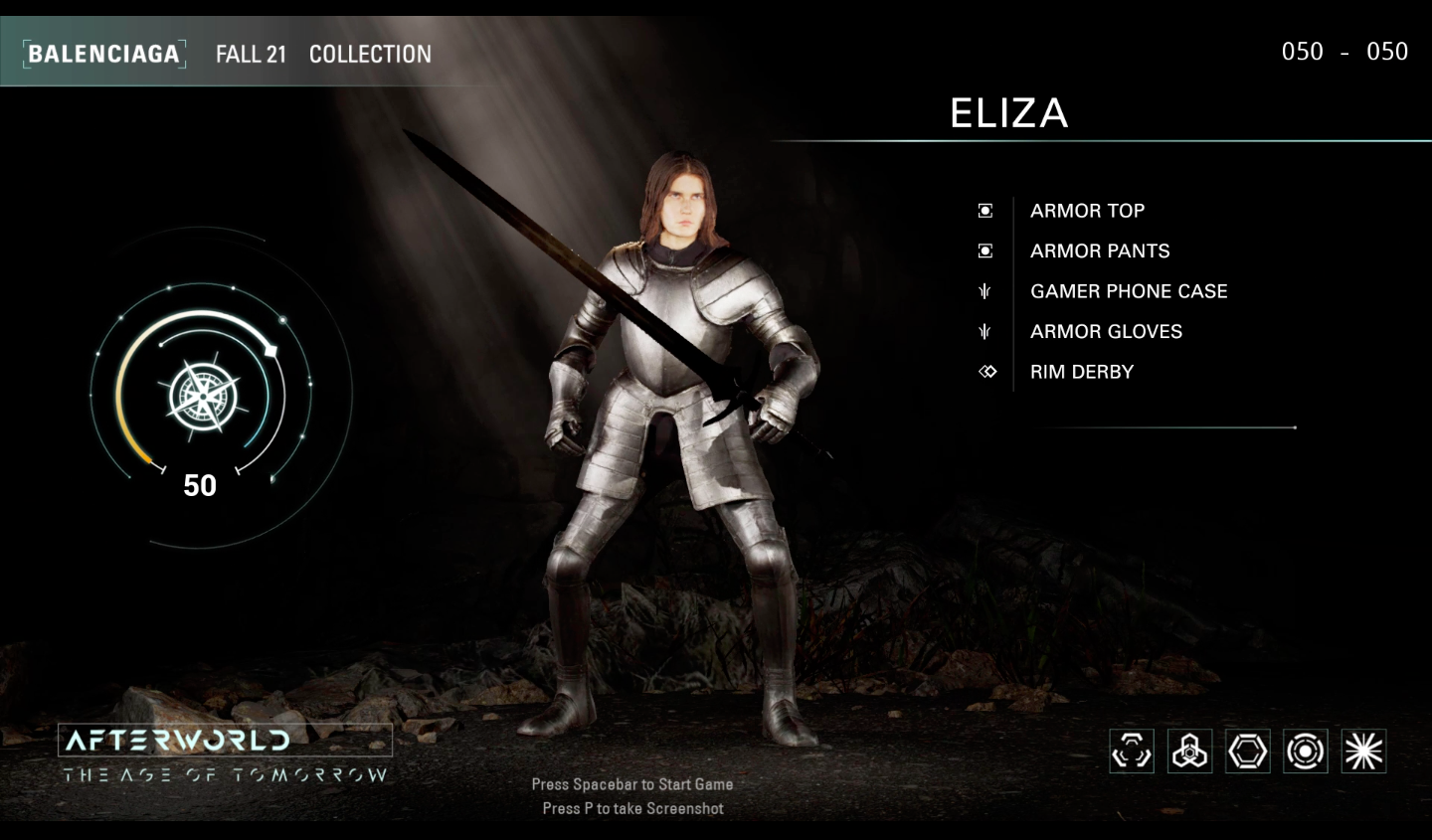 Stills from Balenciaga’s video game Afterworld: The Age of Tomorrow Courtesy of Balenciaga

In Lee’s case, each look is date-stamped and authenticated on the blockchain, with proceeds split between the entire team that produced the project, including royalties from secondary sales. Given the digital element, quantities are no longer an issue — neither is environmental impact.

Hernandez believes “this could potentially impact the production of material goods, in the same way that YouTube and Instagram changed the production of content. It’s the same concept of having access to technology that allows you to reach a wider audience,” she said.

“This is a market that is growing exponentially and there is a real intention to build this economy. It’s just a matter of building momentum and those really exciting cross-purchase experiences,” she added. 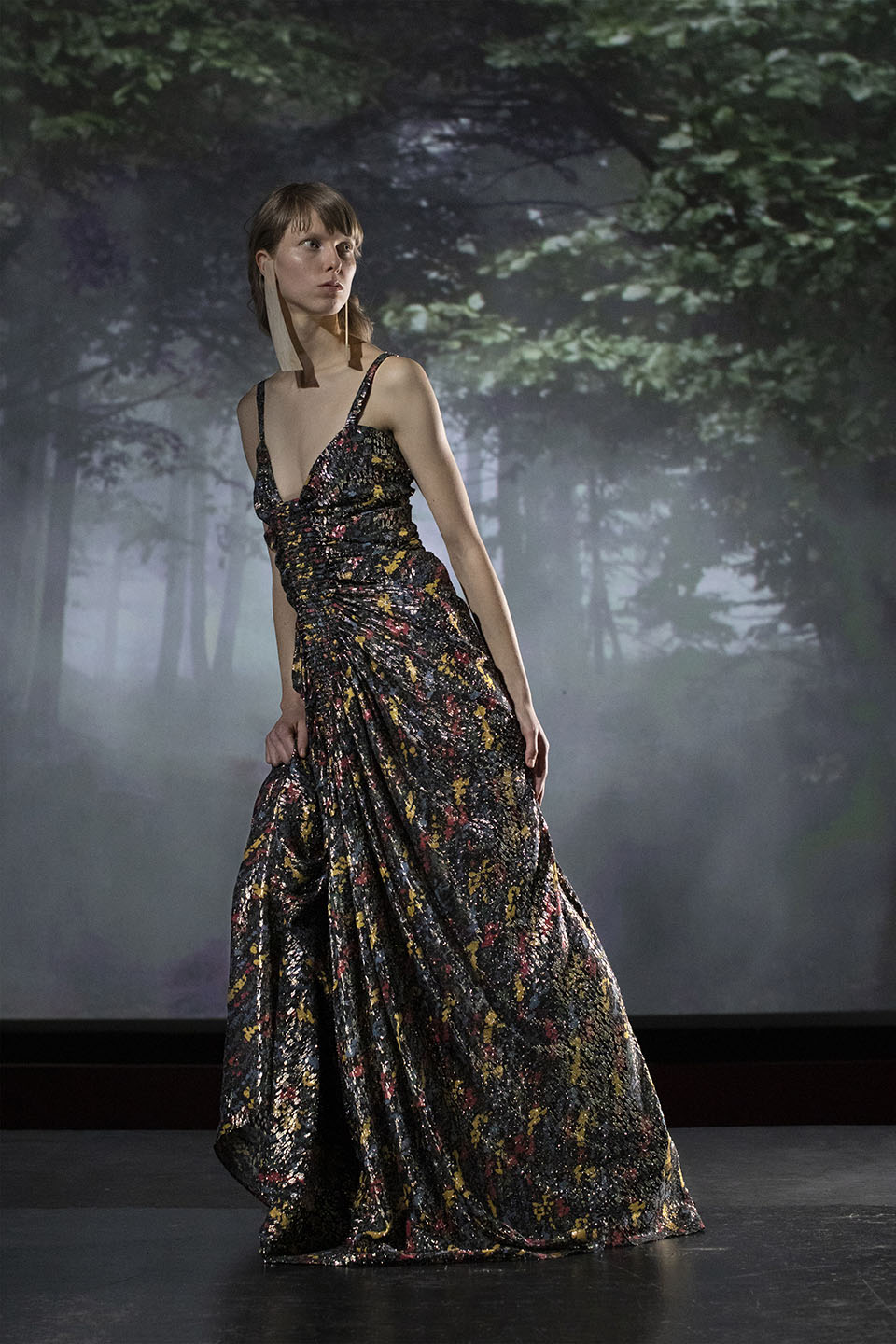