‘I started selling sexy photos after losing my job’

“It was through necessity, I needed an income. It wasn’t because I wanted to just get naked or post pictures of myself,” says Mark.

He lost his job because of coronavirus in March and began posting semi-nude images on a subscriber-based social network.

The 32-year-old had been working for a five-star resort company, performing in shows. But when lockdown hit, his contract was cancelled.

“I applied for every single job I could find – all of the supermarkets, anything that was on the JobCentre website – I applied for them all.”

He later set up an OnlyFans account on his friend’s recommendation.

On the platform, followers pay a monthly subscription fee to access creators’ photos, videos or live streams, with the firm taking 20% commission. It isn’t just aimed at people who sell nude images, but many users do.

Despite the “no full-frontal nudity” disclaimer in his bio, it started to pick up. Mark estimates that he’s made about £1,500 over the last four months, posting similar content on his Instagram account. 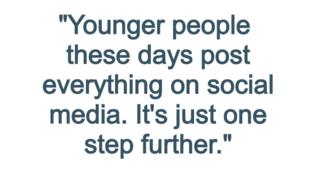 “On the flip side of that, there is also the negativity,” he adds. He says he received “abusive” messages from friends online when he first set up his page.

“They told me that I was selling my soul,” he says. “They had assumed that I was going to be having sex with everyone and posting videos of it. My page isn’t that at all.”

And while Mark refuses requests to post explicit photos or videos of sexual acts, he worries that other new users might feel forced to if they’re short on cash.

“Younger people these days post everything on social media. It’s just one step further and it means you’re making money,” he says. “I think that’s appealing to a lot of people when it’s so difficult to find a job at the minute.”

“I’m not the only one among my friends who have lost their jobs and turned to this,” says Rebecca (not her real name). The 22-year-old from Scotland lost her job as a craftworker apprentice and moved back in with her parents in April.

Having experimented with selling nudes online in the past, “it became apparent that I would need to take it more seriously on losing my job,” she says.

She set up an OnlyFans account and now schedules photo shoots of “soft-core” nudes for when her mum and dad are out of the house. She’s made hundreds of pounds selling these to her subscribers, who pay £5.55 per month.

‘It can be dangerous’

Rebecca enjoys that she has control over her hours and who she speaks to online. “It is a good source of income,” she says, before adding, “but it does come with risks.”

“It’s a lot of emotional labour,” she says. “You really have to open yourself up and be vulnerable and it can be dangerous.”

The 36-year-old pole dance instructor and stripper set up her OnlyFans page after her places of work were shut during lockdown. She made about £1,000 in the first month, which she used to pay her rent and bills.

“You’re basically working as a commission-only salesperson. If you don’t do the work, you don’t get paid.”

She describes the emergence of these platforms into the mainstream as a “double-edged sword”.

“It’s good that it’s removing the stigma by bringing it more into the public eye,” but customers are looking for cheaper content as more sellers sign up, she says. The market is oversaturated.

“If you’re going to set up a subscription site for a bit of fun – please don’t. There are people who are using it to try and survive at the moment,” she says.

She urges people to think about starting out in the industry carefully: “Set your boundaries before you make your content. Remember that it is out there forever.”

As well as the possibility of being harassed by customers, privacy is a concern for Mark, Rebecca and Lexi. It can be difficult to hide your identity online and content can be stolen.

Photos or videos on such platforms may be copied and shared elsewhere, taking away sellers’ incomes, or “outing” them to friends, family or employers.

Earlier this year, London-based OnlyFans saw a reported “leak” of users’ content from the site. It breached the platform’s policy that creators’ content on the site isn’t allowed to be shared.

A BBC Three investigation also found evidence of the firm’s age verification process being circumvented, meaning under-18s were able to illegally sell explicit content of themselves on the site.

At the time, OnlyFans said that if it is alerted to any underage individual who has gained “illegitimate access” to the platform, it always takes immediate steps to investigate and suspend the account.

Yet more and more people are signing up to sites like OnlyFans.

OnlyFans told the BBC that between March and July, the number of UK creators increased by 42% to about 95,000.

Another UK platform, AdmireMe, saw an increase of about one-third on its usual number of sign-ups after lockdown started.

Teela Sanders, a criminology professor at the University of Leicester, says that platforms need to go further in signposting risks to new users and helping them if they receive unwanted messages or want to delete their profile entirely.

“There certainly is a lot more that needs to be done, especially as we see new platforms popping up all of the time, which don’t necessarily have the awareness that they need to be responsible platforms,” she says.

She expects the industry will only continue to grow as the UK heads into the worst recession seen in decades. “Online sex work was already becoming much more visible, more socially acceptable.”

An OnlyFans spokesperson said: “With a duty to help battle against illegal piracy, OnlyFans is firmly in the fight to protect user content.”

The firm said it has a dedicated team that issues formal “takedown” notices against reported leaks and copyright violations. More than 75% of content reported as stolen has been taken down from offending websites successfully this year, the spokesperson added.

“The safety of our content creators is a top priority,” they said.

OnlyFans said it also had a strict “on-boarding” process and offered guidance to new users on how best to use the 18+ platform on its blog. But it said ultimately, “every creator needs to consider the pros and cons”.

A Home Office spokesperson said that there were plans to “put a legal duty of care on online platforms, backed up by an independent regulator, to hold them to account”, as outlined in the Online Harms White paper.

“This world-leading legislation will help us tackle harmful content online and make the UK the safest place in the world to be online.”

The chair of the Lords Democracy and Digital Committee recently warned, however, that the government’s online protection bill might not come into effect until 2023 or 2024.