Home » Business » Manhattan’s Office Buildings Are Empty. But for How Long?

Manhattan’s Office Buildings Are Empty. But for How Long?

As they grow accustomed to working from home, many businesses are delaying signing new leases until rents drop and the pandemic passes.

By Julie Creswell and Peter Eavis

Even as the coronavirus pandemic appears to recede in New York, corporations have been reluctant to call their workers back to their skyscrapers and are showing even more reticence about committing to the city long term.

Fewer than 10 percent of the New York’s office workers had returned as of last month and just a quarter of major employers expect to bring their people back by the end of the year, according to a new survey. More than half of these companies say they will return by July 2021.

Demand for office space has slumped. Lease signings in the first eight months of the year were about half of what they were a year earlier. That is putting the office market on track for a 20-year low for the full year. When companies do sign, many are opting for short-term contracts that most landlords would have rejected in February.

At stake is New York’s financial health and its status as the world’s corporate headquarters. There is more square feet of work space in the city than in London and San Francisco combined, according to Cushman & Wakefield, a real estate brokerage firm. Office work makes up the cornerstone of New York’s economy and property taxes from office buildings account for nearly 10 percent of the city’s total annual tax revenue.

What is most unnerving is that a recovery could unfold much more slowly than it did after the Sept. 11 attacks and the financial crisis of 2008. That’s largely because the pandemic has prompted companies to fundamentally rethink their real estate needs. 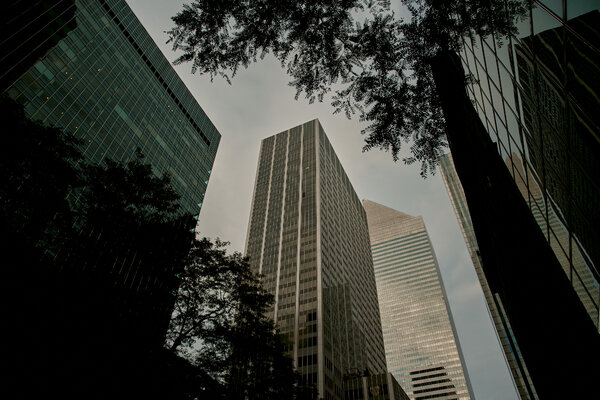 Robert Ivanhoe, a real estate lawyer at Greenberg Traurig, said he had about 20 clients that had postponed searches for new offices. “They are putting a lot of thought into coming up with a new operating model — how much of my work force is going to work from home and for how much time?” he said “It has never been turned upside down like this before.”

Real estate data confirms that. The number of office leases signed from January through August totaled 13.7 million square feet, less than half as much as the first eight months of last year, according to Colliers International, a real estate brokerage firm. By contrast, leasing hit an 18-year high at the end of last year with nearly 43 million square feet of new leases and renewals.

“When it comes to making decisions about office leases, the words are postpone, adjourn and delay,” said Ruth Colp-Haber, the chief executive of Wharton Property Advisors, a real estate brokerage firm.

Executives at the meal delivery company Freshly were ready to sign a lease for 50,000 square feet of office space at 2 Park Avenue, a stately, 29-story Art Deco tower in Midtown, in March.