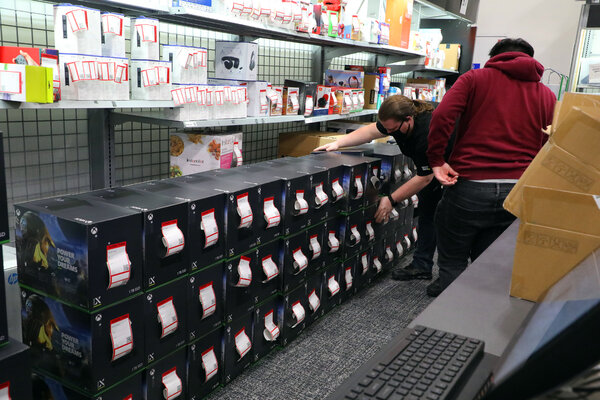 Microsoft continued to benefit from the pandemic’s shift to remote computing and gaming, with revenue and profits reaching new heights in the latest quarter, the company said on Tuesday.

Sales in the quarter hit $43.1 billion, up 17 percent from a year earlier, and profits rose 33 percent to $15.5 billion, Microsoft said. The results, driven by strength across its lines of business, far surpassed analyst expectations.

The company’s stock jumped more than 4 percent in aftermarket trading.

While corporate tech spending took a hit early in the pandemic, a recent Citigroup survey of executives found companies are paying again for the kinds of services Microsoft offers: security, cloud computing and work platforms like Office 365 and Teams that help people work from home.

Mike Spencer, the head of Microsoft’s investor relations, said the rebound in commercial spending was “pretty broad based,” across industries and businesses large and small. “Fortunately for Microsoft, the investments we have been making over the last couple of years align very well with what they are prioritizing,” he said.

Sales of Azure, the company’s flagship cloud computing product, grew 48 percent, as corporate customers shifted more work away from their own data centers and changed their businesses to be more digitally savvy. And sales of commercial Office 365 products grew 20 percent. Those and other commercial cloud products produced $16.7 billion in quarterly sales.

The company had its first $5 billion quarter for its gaming business, Mr. Spencer said. The pandemic has been a boon for gaming, with people looking for entertainment at home, and the last quarter marked the long awaited launch of Microsoft’s new generation of the Xbox gaming console. Mr. Spencer said the company sold out of all of its supply of the new Xbox last quarter, as its supply chain, itself disrupted by the pandemic, could not keep up with demand.

The Xbox is part of Microsoft’s strategy to hook customers on a Netflix-style subscription service it calls Game Pass. Stuck at home because of the pandemic, consumers are spending and engaging more with games, sending revenue for Xbox content and services up 38 percent in the quarter. That helped drive revenue in the company’s personal computing segment up 13 percent to $15.1 billion.