The artwork of elementary school students decorates the office windows behind home plate at Richmond County Bank Ballpark in Staten Island. One encourages residents not to litter. Another drawing, of the stadium’s infamous Staten Island pizza rat mascot, reads: “Better Days Are Coming!”

But empty liquor bottles litter the nearby concourse, and dandelions and other weeds grow in the outfield.

For the first time in 20 years, the ballpark is not the home of the Staten Island Yankees. In fact, nothing is happening at the city-owned stadium, which covers about six acres and offers waterfront views of Lower Manhattan.

Many in Staten Island hope better days are coming soon. Like dozens of other places around the country, New York will have to decide to what extent that future includes baseball. 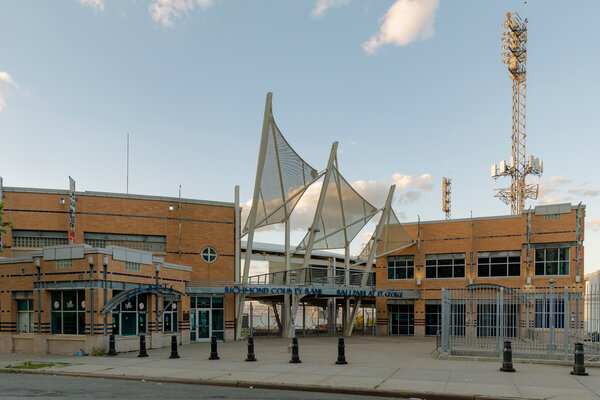 In December, Major League Baseball completed a long-anticipated overhaul of its farm system, stripping 40 municipalities of minor league affiliations. Those cities were left with finding other baseball options or exploring a long-term solution through redevelopment.

Stadium face-lifts are often expensive — around $5 million for large-scale renovations. Even demolition can cost hundreds of thousands of dollars. City officials in Huntsville, Ala., for example, estimated that tearing down their ballpark would cost $800,000.

For others, youth tournaments have emerged as a profitable option. Youth sports have become a multibillion-dollar industry, and since 2017, more than $550 million has been spent developing complexes for them. Hamilton, Ohio, repurposed an aging paper mill into one of the largest indoor sports complexes in the country.

“I think that will happen in a lot of these facilities,” Mr. Reichard said, noting how Jackson, Miss., recently converted an unused minor league park into a youth sports academy.

Kristin B. Aleshire, a City Council member in Hagerstown, Md., sees potential for youth sports beyond baseball, now that his city has lost its minor league affiliation.

For the past decade, Mr. Aleshire advocated to demolish the 91-year-old Municipal Stadium — the former home of the Hagerstown Suns, a Class A affiliate of the Washington Nationals — and replace it with an indoor facility that could host a wider variety of sports, like soccer and flag football.

“They’re economic drivers bringing people to restaurants and hotels,” Mr. Aleshire said. “There’s thousands of families that go to these venues for tournaments.” He added that the estimated $100,000 cost to demolish Municipal Stadium was far less than the $1 million or so the ballpark needed in deferred maintenance.

Despite being dumped by Major League Baseball, some in Hagerstown and other cities remain fond of the idea of hosting a baseball team. Much to the delight of Hagerstown’s pro-baseball contingent, Gov. Larry Hogan signed legislation enabling the Maryland Stadium Authority to issue almost $60 million in bonds to finance a new stadium in Hagerstown.

The primary use would be minor league baseball, most likely in the independent Atlantic League. Founded in 1998, the league is most notable as a domain for former major leaguers past their prime.

Without the state funds, the effort to return baseball to Hagerstown “would’ve been a dead issue,” Mr. Aleshire said. He added that the city had made clear for decades that a new baseball stadium could not create any public debt for residents.

Before closing down, the Suns had the lowest attendance in its league. The benefits of hosting an independent team are debatable. In a pitch given to Hagerstown early this year, Eric Menzer, president of the Atlantic League team in York, Pa., boasted that a new stadium there had created “more than $130 million in private investment.”

Cities like Newark, however, built stadiums for the Atlantic League only to see their teams fold and the ballparks demolished.

That hasn’t stopped Staten Island, which appears close to taking its chances with the Atlantic League, even after averaging only 1,848 fans in its 7,171-seat stadium in 2019. (The 2020 season was canceled because of the pandemic.)

The final years of Staten Island’s relationship with the Yankees appeared to be less than stellar. There were reports that the parent club had complaints about the stadium’s deterioration and anger over a rebranding as the “Pizza Rats,” whereby the Staten Island Yankees centered promotions on a 2015 viral video of a rat dragging a slice through the subway. The Yankees did not respond to a request for comment.

These days at Richmond County Bank Ballpark, which opened in 2001, rectangular sections of the outfield fence lie face down on the warning track, making the center field wall appear as if it’s missing teeth.

Despite indicators that America’s pastime might not be the best fit in Staten Island, the New York mayor’s office said in April that it wanted baseball as a primary focus at Richmond County Bank Ballpark. The city’s economic development corporation, which oversees the property, has already approved $567,873 to cover recent utility and maintenance costs. The city has pledged over $8 million to upgrade the facility.

“It definitely needs more than tender loving care; it’s 20 years old,” said James Oddo, the Staten Island borough president. “It seems some of the maintenance was kicked down the road.”

The influx of city cash would also allow for installation of a new field that could withstand the heavy, repetitive trampling by cleats that grass outfields cannot. An artificial surface could also better endure events like concerts. Rugby and soccer have been discussed as other pro sports that could be played at the ballpark, and Mr. Oddo said removing seats and reconfiguring the outfield wall was a possibility during renovations.

Mr. Reichard of Ballpark Digest estimated that covering a field in synthetic turf could cost up to $1 million. He added a new seat costs about $110 plus installation (although used seats in good condition can be resold). The total for new seating six years ago at McCormick Field in Asheville, N.C., came to about $250,000.

“All of our dreams and ambitions of a facility that’s fully alive are predicated on synthetic turf,” Mr. Oddo said.

A busy, functioning stadium in Staten Island is crucial for turning the waterfront into a destination. The Empire Outlets shopping mall opened next to the stadium in May 2019, but the pandemic has slowed growth. Bordering the left field side of the ballpark is an empty lot allocated for a giant Ferris wheel, with signage still indicating its arrival in 2017.

The Staten Island Yankees also relinquished valuable parking space for those projects, which were intended to attract tourists from Manhattan.

Building such facilities does not come without risk. When Major League Baseball reshaped the minor leagues, teams became locked into affiliations for only 10 years, seemingly giving minor league teams that were left out a window to refurbish their stadiums in case an availability opened up a decade later.

The 10-year deals could also give major league clubs leverage to demand more upgrades from current partners. Major League Baseball has already ordered the minor league team in Eugene, Ore., to build a new stadium or the franchise will be relocated by 2025.

Community leaders in Lancaster, Calif., which lost the Class A Lancaster Jethawks after 25 years, are less keen on jumping through such hoops. The city’s parks department, which owns Lancaster Stadium, is working with an architectural firm to develop “very high-level conceptual designs,” said Sonya Patterson, director of parks, arts, recreation and community services in Lancaster.

A multipurpose events center for concerts, an indoor gymnasium and an aquatics center are all possible new uses at the site, she said.

“That was a big loss for us,” Ms. Patterson said. “But once we got that notice, we then looked to that horizon and thought about what an extraordinary opportunity this is for the city to reimagine this space.”