GameStop, amateur investors like to say, is going to the moon.

In a language all their own — with rocket ship emojis and unbreakable “diamond hands” — these online investors insist the struggling video-game retailer’s stock is about to soar even higher than last week’s spike, and urge one another to hold on tight.

But another big drop on Tuesday — GameStop’s shares have fallen 72 percent over the last two days — is testing their stomachs.

Tigran Avetisian, 30, a chemical engineer outside Boston, put about $40,000 into GameStop in the past two weeks, including $20,000 from his individual retirement account when the price was $275 a share. He’s down $10,000 after Tuesday’s plunge.

“For a little while, it was just free money for everybody,” said Mr. Avetisian, who was up $80,000 at one point and still hopes to turn a profit when he decides to sell. “But part of the stock market is knowing when to get out.”

The GameStop roller coaster has wiped out wealth almost as fast as it created it last week. Tuesday’s 60 percent drop left the share price at $90, or about $14 higher than it closed last Monday, just before the rally really took off.

Since its peak of $483 on Thursday morning, GameStop’s shares are down 81 percent. On paper, that means $27 billion in market value has disappeared, much of it from the brokerage accounts of small retail investors. 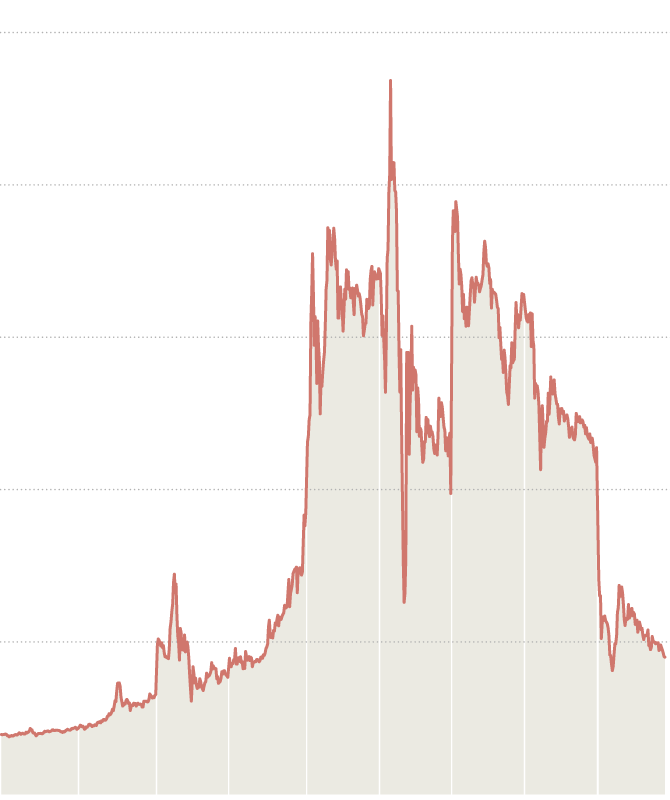 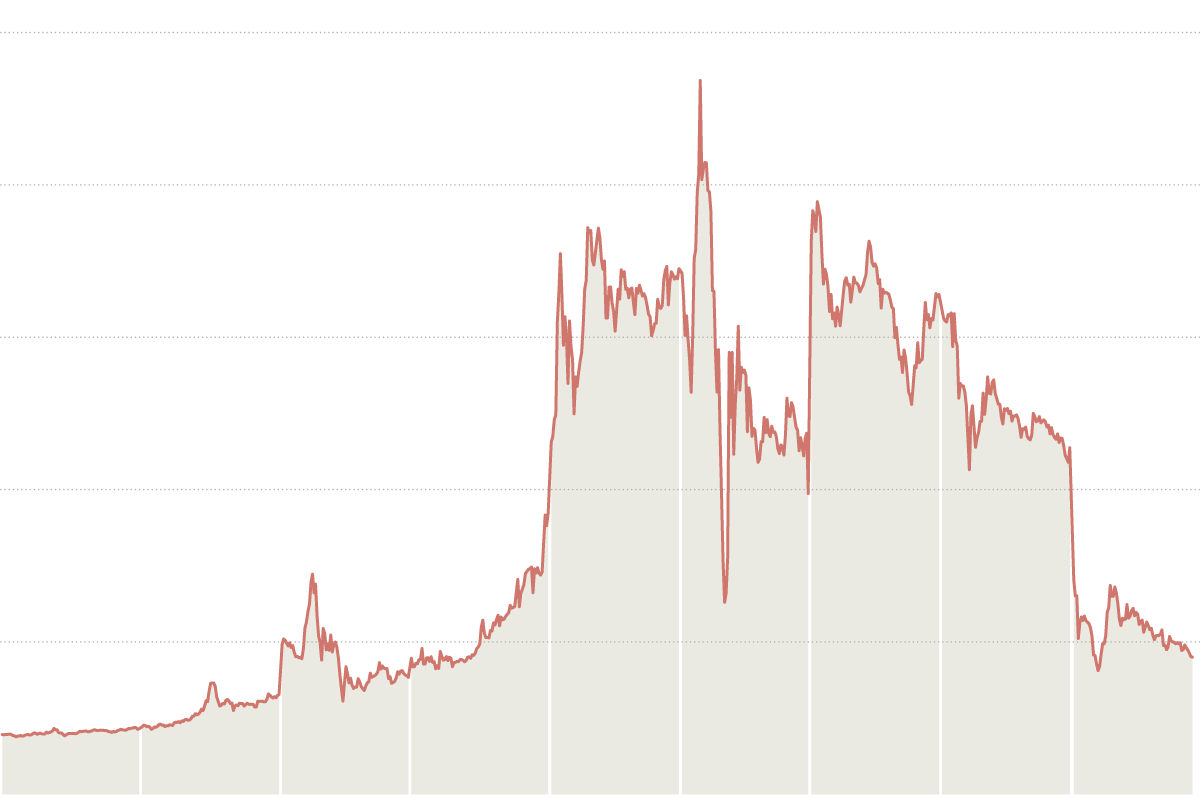 By The New York Times

But many small investors — even some who caught the fever only last week — believe the stock will rally again. And even if it doesn’t, their personal losses will be an unimportant detail in a crusade against traditional Wall Street powers.

“If my entire position in GameStop went to zero, I’d be OK with it,” said Gregory Lu, a 24-year-old law student from San Diego who posts on the WallStreetBets Reddit forum, where many users hope to use GameStop to stick it to hedge funds that bet against its shares.

“We’re not interested in so much the means we would get personally,” he said, “but what we hope the rest of the world sees and what the hedge funds get as punishment for what they have been doing.”

In the last week, Mr. Lu has spent about $2,500 buying GameStop shares and $750 on AMC Entertainment, the movie theater chain. He was undeterred by GameStop’s fall, dismissing it as a blip before the price rises again. “I’m not worried about any kind of dips,” he said.

On Reddit, where the WallStreetBets forum has gained more than six million users since the GameStop madness began, many amateur traders insisted that the share price was destined to reach $1,000. 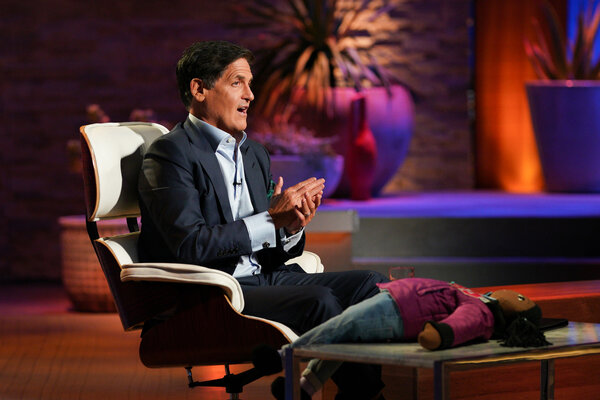 And on Tuesday, the billionaire Mark Cuban logged into the forum and encouraged users to keep holding the stock “if you can afford to.”

Popular online brokers like Robinhood have restricted trading in GameStop and other highly volatile stocks, he noted, putting artificial limits on demand. Once those restrictions are lifted, “then we will see what WSB is really made of,” Mr. Cuban wrote, using shorthand for the forum’s name. “That is when you get to make it all work.”

The online frenzy that has engulfed GameStop is, at its heart, a classic stock-market strategy of big Wall Street investors that has been embraced by retail investors. Acting en masse, they have bid up shares that other investors — in this case some hedge funds, including Melvin Capital — had bet against. Called a short squeeze, the idea is to put pressure on the short sellers, who had sold borrowed shares with the intention of repurchasing them at a lower price. The shorts would be forced to buy the rising shares to minimize their losses, accelerating the rise.

But there is an inherent tension between the twin goals for GameStop expressed by Reddit-based investors, pressuring the shorts out of the stock and trying to push the price to $1,000: If the shorts are pressed into an unconditional surrender, it will bleed their demand for shares.

There are signs that is happening: Short interest — the number of shares of a company held short — as a percentage of available shares of GameStop has declined sharply, from close to 60 percent in January to 34 percent on Monday, according to data from S3 Partners, a firm that tracks short-selling activity. That just means that hedge funds were exiting their short positions in GameStop.

“What happens after the shorts are out?” asked Brad Golding, a portfolio manager at Christofferson, Robb & Company, a private money-management firm. (Mr. Golding said his firm had no position in GameStop.) “Just from a technical standpoint, who’s left to buy? Nobody.”

When betting on a single stock, timing is everything.

For those who bought shares early on (or option contracts allowing them to buy shares at a low price), selling high means big profits. It’s still possible to make money if they miss the peak, but they can also lose if the price plummets before they can sell.

Spencer Anderson of Shoreline, Wash., an aquatics director at a Y.M.C.A. branch, put more than $10,000 into GameStop and AMC last week. He has lost more than half of it.

“I am planning on holding for now,” said Mr. Anderson, 25, who began to lurk on the WallStreetBets forum a week ago. “I will see how this volatility plays out today. But I might be liquidating at the end of the week or next.”

Knowing that big investors have lost at their own game, he said, “If I lose $6,000, between that and everything that happened with the market, I wouldn’t regret it.”

Not everyone sees it that way.

“I’ve had at least three, four guys confide in me that they’ve lost money and they’re never going to invest again,” said Tobi Alli, an amateur trader from Bowie, Md., who last week bought 80 shares of AMC and 50 shares of Nokia, two other previously unremarkable stocks that have rallied as part of a rebellion against hedge funds.

Mr. Alli said he would have walked away with a tidy gain had he sold earlier, and now he’s down $800 on his initial investment. But he said he was not even thinking about gains anymore. Instead, holding on to his shares is a protest against the brokerages that have instituted certain limits or restrictions on trading of volatile stocks.

Mr. Alli, who owns a small multimedia company, is among those who believe that brokerages — like the one he uses, TD Ameritrade — imposed certain limits under pressure from the hedge funds that he and his fellow retailers have been trying to squeeze.

“You know that you may go into it and lose, and I was ready for that,” said Mr. Alli, who follows Twitter accounts that post WallStreetBets content. “But what I wasn’t ready to do was to lose based on manipulation from billionaire guys who are stopping people from doing what is their legal right.”

For investors who aren’t interested in a crusade, the big swings and high stakes are nerve-racking.

Ian Poppel, 23, a wildland firefighter in Winnipeg, Manitoba, invested $18,000 — equivalent to an entire fire season’s salary — into GameStop over three days, just before the stock took off. He cashed out last Wednesday, a day before the rally peaked.

“I didn’t sleep,” said Mr. Poppel, who started trading stocks as a hobby during the off-season. “I didn’t really eat those couple days. I was so stressed about how that trade would go.”

He netted about $40,000, a sum he called “life-changing money.” But he knows it had nothing to do with investing skill.

“I lucked out,” he said, “and I see people online who say they’ve lost their whole life savings.”