An unauthorized mash-up of the “Star Trek” and Dr. Seuss universes, a book titled “Oh, the Places You’ll Boldly Go!”, is not protected from a copyright infringement claim, a federal appeals court ruled last week.

The ruling by a three-judge panel from the U.S. Court of Appeals for the Ninth Circuit concerned a Kickstarter-backed book, created by ComicMix, that inserted “Star Trek” characters into the whimsical pastel world that Dr. Seuss created for the 1990 children’s classic “Oh, the Places You’ll Go!” The ComicMix book, a primer on “Star Trek” characters and lore, replicated broad swaths of the Dr. Seuss original, including small details of the illustrations, the judges said.

Lawyers for ComicMix argued that the publication was permissible under fair use, a legal defense that grants satirists, aggregators and remixers some leeway under certain circumstances. But in overturning a lower-court ruling, the judges declared that the publication failed to meet the required standards for fair use, partly because it was not a parody or otherwise transformative.

“The creators thought their ‘Star Trek’ primer would be ‘pretty well protected by parody,’ but acknowledged that ‘people in black robes’ may disagree,” Judge M. Margaret McKeown wrote in the opinion, which was issued on Friday. “Indeed, we do.” 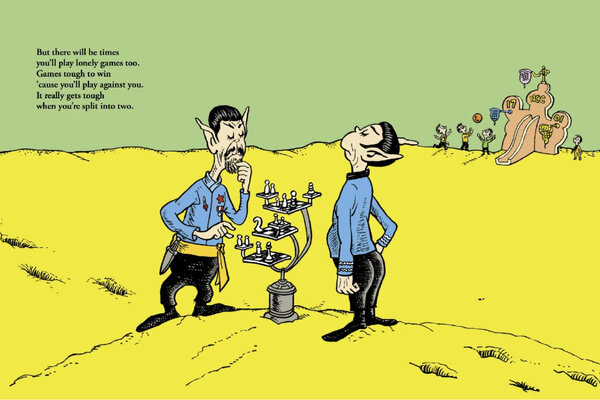 The book was created by David Gerrold, who wrote for the original “Star Trek.” It was illustrated by Ty Templeton, a comic book artist, and edited by Glenn Hauman, vice president of ComicMix.

Dr. Seuss — Theodor Seuss Geisel — died in 1991. Dr. Seuss Enterprises, which oversees the author’s estate, sued the three men and ComicMix in November 2016. The judges’ ruling allows the lawsuit to proceed on the fair use claim.

Mr. Hauman said in an interview that he and his lawyer had not decided how to proceed but added that he was “pretty optimistic.”

“I’m just going to quote Captain Kirk and say there are always possibilities,” he said.

In a statement, Dr. Seuss Enterprises said it was “thrilled” with the decision.

“D.S.E. recognizes the broad-reaching significance of this appellate decision and is committed to protecting Dr. Seuss’s works to ensure that each generation may experience the amazing stories and worlds he created,” the company said.

The book, which was never published, raised nearly $30,000 in 2016 on Kickstarter. Dr. Seuss Enterprises responded to the crowdfunding effort by sending a cease-and-desist letter to ComicMix and a takedown notice to Kickstarter under the Digital Millennium Copyright Act. Kickstarter took down the campaign and blocked the funds that had been pledged.

Artists and publications have long wrestled with what can and cannot be considered fair use, a notoriously difficult to define standard that has left many creators uncertain of where the boundaries are. But ComicMix did not consult a lawyer or pursue a license before creating the book, Judge McKeown wrote.

ComicMix could not argue the book was a parody since it wasn’t critiquing the original, the judge wrote. ComicMix argued that the book could be considered transformative since it contained “extensive new content,” a claim the judge rejected.

“Although ComicMix’s work need not boldly go where no one has gone before, its repackaging, copying, and lack of critique of Seuss, coupled with its commercial use of Go!, do not result in a transformative use,” Judge McKeown wrote.

The illustrations copied the exact composition of the original, the judge said. The book “captured the placements and poses of the characters, as well as every red hatch mark arching over the handholding characters in Grinch’s iconic finale scene, then plugged in the Star Trek characters,” the judge said.

On a crowdfunding page to help with legal fees, Mr. Hauman described the thinking behind the ComicMix book — writing, fittingly, in Seussian rhyming verse.