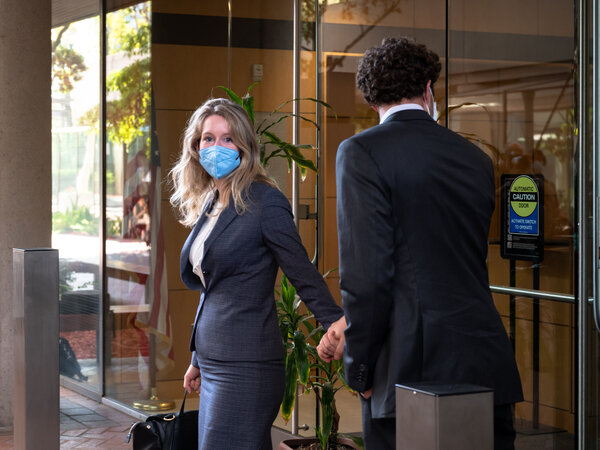 The case of Elizabeth Holmes

The trial of Elizabeth Holmes began yesterday with opening arguments. Holmes, the founder and former C.E.O. of Theranos, a blood testing start-up, has been charged with 12 counts of wire fraud and conspiracy to commit wire fraud; if convicted, she faces up to 20 years in prison. Lawyers on both sides framed the debate set to dominate the trial: whether Holmes was knowingly cheating investors or blindly taken in by Silicon Valley’s “fake it ’til you make it culture” as well as by her former business and romantic partner Ramesh Balwani.

“This is a case about fraud and about lying and cheating to get money,” said Robert Leach, an assistant U.S. attorney for the Northern District of California, who is leading the prosecution for the government. Leach contended that Holmes knew that some patients’ results from Theranos blood tests were inaccurate and didn’t act.

“Out of time and out of money, Elizabeth Holmes decided to lie,” said Leach, who argued Theranos used glowing media and false claims to draw in investors, partners and board members, including Rupert Murdoch, Walgreens and Henry Kissinger.

“The villain the government just presented is actually a living, breathing human being who did her very best each and every day,” said Lance Wade, Holmes’s lawyer. Wade let the jury know that Holmes was a new mother and pointed out Holmes’s own mother in the audience.

“Trying your hardest and coming up short is not a crime,” Wade said. He argued that Theranos had built some valuable blood-testing technology and that Holmes believed at the time that Theranos tests were accurate.

“You’ll hear that trusting and relying on Mr. Balwani as her primary adviser was one of her mistakes,” Wade said. Holmes’s lawyers have said in filings that Mr. Balwani emotionally and mentally abused Holmes. That, Holmes’s lawyers argue, negated her ability to intentionally deceive investors.

For more Holmes trial reading, here are six pages of messages between Holmes and Balwani, which were submitted as evidence. In one string of texts to Balwani, who goes by Sunny, Holmes waxes poetic about their relationship: “You are breeze in desert for me / My water / And ocean / Meant to be only together tiger.”

The Biden administration may urge private businesses to do more in the fight against Covid. President Biden is expected to give a speech today outlining the administration’s six-step plan to tackle the Delta variant. The plan is likely to include efforts to push private businesses, including restaurants and other indoor venues, to require proof of vaccination. Also today, the Los Angeles school district is expected to become the first in the U.S. to mandate vaccines for all students 12 and older who are attending classes in person.

The Energy Department is proposing a radical solar power transformation. A blueprint released yesterday showed how the U.S. could produce almost half of its electricity from the sun by 2050 — a potentially big step toward fighting climate change. But meeting that goal would require vast upgrades to the electric grid, and that has little historical precedent.

The Treasury Department says the wealthiest Americans are the most egregious tax evaders. The richest 1 percent failed to pay up to $163 billion, according to a new government analysis. It comes as the Biden administration is urging lawmakers to bolster the I.R.S.’s budget for enforcement and increase its ability to collect revenue. Meanwhile, Janet Yellen, the Treasury secretary, warned in a letter to lawmakers that the U.S. could default on its debt sometime in October if Congress did not raise or suspend the debt limit.

Job openings reach another record high. Almost 11 million jobs were left unfilled in July, according to the latest Labor Department figures, an increase of 749,000 from the previous month. The sharp rise in openings comes after a jobs report that showed August was one of the weakest months for hiring since the economic recovery began more than a year ago.

Retail investors cool on meme stocks. GameStop shares fell despite the company announcing an improving bottom line in its second quarter. Meanwhile, Sheila Bair, who led the F.D.I.C. during the financial crisis, used an opinion article in The Financial Times to urge the S.E.C. to take action against payment for order flow, a controversial practice used by Robinhood and other retail brokerages.

Cryptocurrency entrepreneurs often say they want regulators to provide guidance so they can launch new products without worrying they’ll be squashed through an enforcement action. But when the S.E.C. warned the crypto exchange Coinbase that it might sue if the company released Lend — a product that would let users earn interest off their crypto holdings at higher rates than banks — Coinbase’s C.E.O., Brian Armstrong, called the agency’s behavior “sketchy” in an extensive Twitter thread.

Coinbase wants to follow the rules, Armstrong said, but the S.E.C. won’t say what they are. Instead, he argued, the agency lets companies that don’t ask for permission get ahead, and he noted that others offering interest-bearing crypto accounts have not been shut down. “If you don’t want this activity,” Armstrong said, “then simply publish your position, in writing, and enforce it evenly across the industry.” He accused the S.E.C. of resorting to regulation through uneven enforcement, instead of making clear rules.

The S.E.C.’s chairman has sent mixed messages about crypto. Gary Gensler has called on Congress to give regulators more authority over exchanges and over offerings in gray spaces — relatively new products for lending and borrowing that seem to straddle the line between banking and investment vehicles. Yet Gensler also recently suggested potential approval for a Bitcoin exchange traded fund, or E.T.F., that would be based on futures contracts, giving investors exposure to crypto without holding digital assets.

The industry has reached a “turning point,” said Michael Sonnenshein, the C.E.O. of Grayscale Investments, which runs the Grayscale Bitcoin Trust. It holds about 3.5 percent of the world’s Bitcoin. Sonnenshein doesn’t agree with everything Gensler says, but he is pleased by the attention crypto is getting in Washington. All summer, officials have made a steady stream of pronouncements about digital assets, and senators debated a proposed crypto tax provision in the infrastructure bill. Sonnenshein is convinced that the industry is being taken seriously and that long-sought clarity is coming. “We’re entering an era of regulatory engagement the industry has never seen,” he said. “I’m happy that there’s engagement.”

“It’s the wild, wild West of product claims and labeling with no sheriff in town.”

— Jan Dell, an engineer and the founder of the environmental organization the Last Beach Cleanup, wrote in an email on California’s proposed law, expected to pass this week, banning recycling labels on items that cannot be recycled.

A new survey suggests that rumors of the handshake’s death may not have been exaggerated. Shortly after the pandemic began, obituaries for the ancient custom abounded after Dr. Anthony Fauci, the director of the National Institute of Allergy and Infectious Diseases, instructed Americans to “just forget about shaking hands.” But the question has remained: “Is the handshake truly dead, or is it simply hibernating?”

A monthly online survey run jointly by the University of Chicago, ITAM and Stanford University put it to a panel of 6,800 people, asking them how they used greet someone at work, and what they plan to do when they return in person.

More than 60 percent of respondents said that before the pandemic, they shook people’s hands. Only 23 percent said they planned to do the same in the future.

The favored alternative to the handshake was a verbal greeting. While only 22 percent of respondents said they chose this option before the pandemic, 48 percent said they’d verbally greet people after returning to work.

Fist bumps aren’t gaining as much traction. This was the go-to prepandemic greeting for 18 percent of respondents, and 29 percent said they’d adopt it after they returned to work.

In both prepandemic and current times, women were more likely than men to prefer verbal greetings, and less likely to prefer fist bumps.

Of course, just because people don’t plan to shake as many hands in the future doesn’t mean they won’t. The handshake has survived smallpox and the 1918 flu, and the habit may be difficult to break. Even so, Nicholas Bloom, a Stanford researcher who worked on the survey, said that at least for now, “I would advise people not to offer their hand out when meeting somebody new.”

What do you think? Has the way you greet people at work changed during the pandemic? Let us know: [email protected].

The pharmaceutical firm Perrigo will buy Héra, the maker of the emergency contraceptive ellaOne, in a deal worth more than $2 billion. (WSJ)

The gambling site 888 is buying the international operations of its rival William Hill for $3 billion. (Bloomberg)

Bill Gates will become the majority owner of the Four Seasons after buying half of a Saudi billionaire’s stake in the hotel chain for $2.2 billion. (NYT)

Backstage has spent $200 million this year on acquisitions to expand its business. (Insider)

Senator Elizabeth Warren sent a letter to Amazon demanding it do more to stop “peddling misinformation” about Covid-19. (NYT)

Policymakers at the European Central Bank will meet today to decide when to pull back on its bond-buying program. (NYT)

The Biden administration will back Democratic efforts to lower drug costs, including giving the federal government the power to negotiate prices directly with manufacturers. (WSJ)

The Macy’s Thanksgiving Day Parade is back in person (and vaccinated). (NYT)

Shell is considering vaccine mandates for some staff and firing employees who refuse to comply. (FT)

Best of the Rest

EY has pledged to put $2 billion toward improving the quality of its audits. (FT)

The tennis player Naomi Osaka is now a founder too, having created her own skin care brand designed for people of color. (Insider)

“TikTok served one account registered as a 13-year-old at least 569 videos about drug use.” (WSJ)

What would you like to know about kids and Covid-19? Join Andrew and other Times journalists as they speak to Dr. Anthony Fauci and try to answer your questions about the coronavirus’s effect on children. The exclusive virtual event for Times subscribers is today at 1 p.m. Eastern. R.S.V.P. here to attend.

We’d like your feedback! Please email thoughts and suggestions to [email protected]